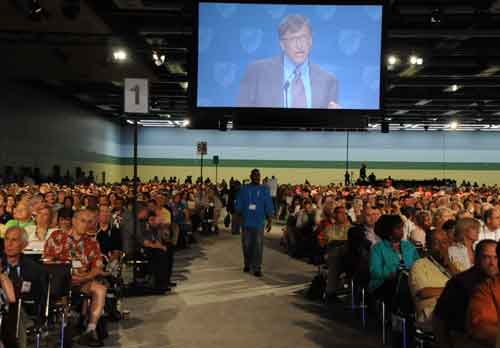 
Over the last thirty years there has been a coordinated effort by rightwing ideologues and billionaires such as the Walmart family (Walton Foundation), Eli Broad (Broad Foundation) Bill Gates (Bill & Melinda Gates Foundation) Donald Fisher (Gap Foundation), Pearson Inc. to privatize the trillion dollar public education system in the US
through charters, common core testing, merit pay and legislation like "No Child Left Behind" and "Race To The Top".
This forum will address how this attack is taking place and how the NEA and AFT which represented nearly two million teachers have done to responded to these attacks.
The NEA and AFT have taken millions of dollars from these same foundations and have accepted the principle of charter schools being introduced into public education.
Has there been a national campaign against privatization and why not?
Has there been an effort to challenge the financial conflicts of interests by privatizers in Boards of Education and other governmental entities?
Have rank and file teachers been provided with a political education and facts and information on how their school/college superintendents, chancellors, regents and managers have implemented privatization tactics including online education and their financial conflicts of interest?
What can education workers, students and all public workers do to defend public education and all public services including fighting the re-segregation of education in the United States.
These will be some of the issues addressed at this forum.

Education is now for sale and big profits for the privatizaters.
END_OF_DOCUMENT_TOKEN_TO_BE_REPLACED
Add Your Comments
Support Independent Media
We are 100% volunteer and depend on your participation to sustain our efforts!