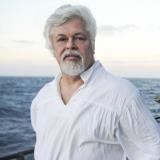 The No Nukes Action Committee NNAC will be having a rally and speak out on Friday January 11, 2013 at the Japanese Consulate on 50 Fremont St. San Francisco at 3:00 PM to protest the action of the Japan LDP Abe government
to push for the building of more nuclear plants, the continued campaign that the Fukushima area can be "decontaminated" and the propaganda that Japan can "overcome" nuclear radiation. The reality is far different despite the government industry media campaign.

The rally and protest will also call for the immediate halt of the burning of nuclear rubble at prefectures around the country, the halt of exports of nuclear technology and demand that Fukushima residents be adequately compensated for their evacuation from Fukushima.
The government has also stepped up police harassment including the arrest of anti-nuclear activists such as Osaka Professor Masaki Shimoji. He along with other anti-nuclear activists were arrested because of their political activity to inform the people of Japan about the danger of the burning of nuclear rubble in Osaka after they walked through the Osaka train station. While he and some others have been released there are still anti-nuclear activists in jail for seeking to educate the public about the dangers of the burning of nuclear rubble and the continued radiation threats from Fukushima and the nuclear power industry.

This attack on democratic rights by the Japanese government as it pursues its effort to continue to hoodwink that the Japanese people that radiation is not harmful is connected. The Abe government's call for the construction of more nuclear plants must be challenged throughout the world and people throughout the world must also come to the defense of Japanese anti-nuclear activists who are coming under increasing attack for speaking out and organizing against nuclear power and the nuclear industry.

We call on all opponents of nuclear power/weapons and those fighting for democratic rights to participate and speak out against the new actions of the LDP Abe government which only received 30% of the vote in the recent election. The Japanese people are being coerced by the pro-nuclear politicians and the US government and nuclear industry to move forward with this deadly and dangerous industry despite the dangers to the survival of Japan and the world.
http://www.yomiuri.co.jp/dy/national/

The No Nukes Action Committee NNAC has a regular speak out and rally every month on the 11th to connect with the March 11, 2011 Fukushima nuclear meltdown and continued radioactive contamination of Japan and the world by this plant.

Please contact our committee for more information and if your organization is interested in endorsing this action please let us know. 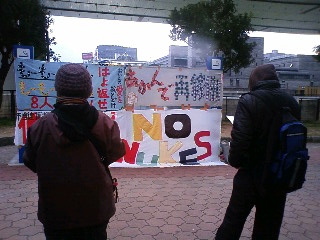 Osaka human rights and anti-nuclear activists picketed to protest the imprisonment of Professor Masaki Shimoji and others. The government is seeking to crush and silence those opposed to the restarting of nuclear plants and the burning of contaminated Fukushima rubble in Osaka and other areas throughout Japan
END_OF_DOCUMENT_TOKEN_TO_BE_REPLACED
§Anti-Nuke Poster for Jan 11, 2013 Action At Japan Consulate
by No Nukes Action Committee 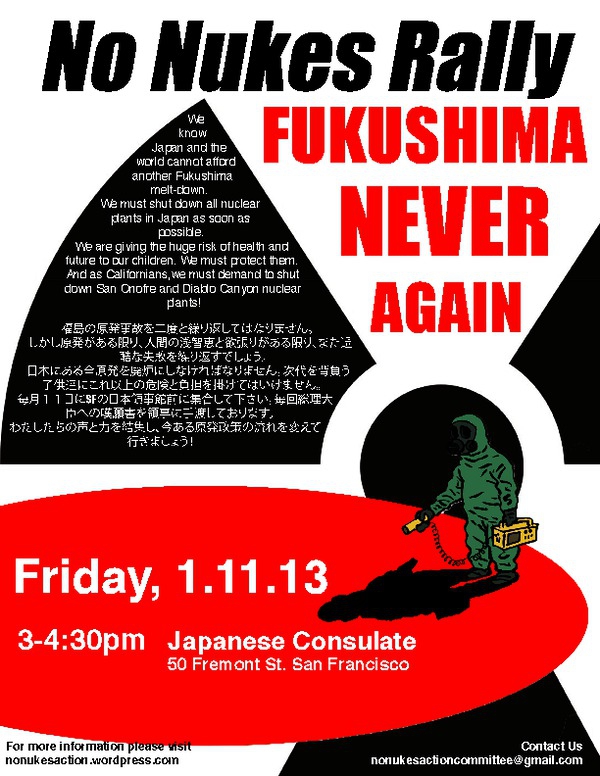 Download PDF (3.9MB)
Anti-nukes Poster for January 11, 2013
END_OF_DOCUMENT_TOKEN_TO_BE_REPLACED
Add Your Comments
Support Independent Media
We are 100% volunteer and depend on your participation to sustain our efforts!