Here’s Real “History in the Making”: The People Fight Back to Save SF City College 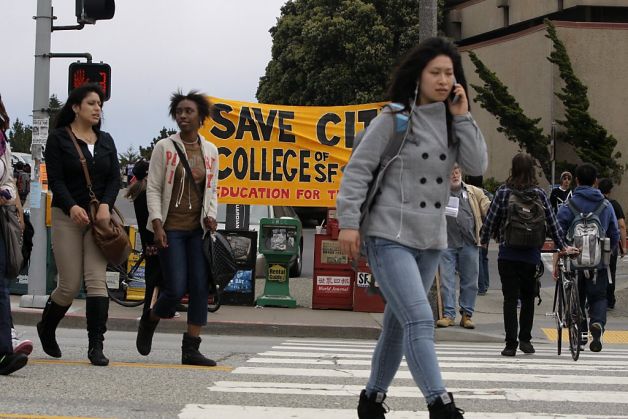 
City College of San Francisco students, staff, teachers and department chairs will picket and boycott the interim chancellor’s welcome address which traditionally kicks off the new semester. Instead of listening to Dr. Thelma Scott-Skillman’s speech, “History in the Making”, City College’s community will make its own history by conducting a press conference and rally addressing the people of San Francisco.

The people of San Francisco overwhelmingly showed a vote of confidence in CCSF by passing Proposition A, a parcel tax specifically dedicated to offset budget cuts, prevent worker layoffs, maintain essential classes, programs and student support services. However, the district is intending to use the funds for other purposes, namely paying high-priced consultants and bolstering reserves.

During this event people will be asked to sign a Pledge of Resistance stating their intention to take drastic action if the district doesn’t spend Proposition A funds (or reserves) as intended.

Wendy Kaufmyn, Engineering instructor of 29 years, said, “ We need to remain steadfast in our commitment to the California Master Plan and its vision of free education for all and to AB1725, legislation which encourages an administrative role by department chairs elected by their peers.”

We accept the accreditation commission’s legitimate suggestions, but we will not accept the Accrediting Commission for Community and Junior Colleges undermining of mission of our community college. We demand a commitment to the California Master Plan and its vision of free education for all, and to AB1725, encouraging an administrative role by peer-elected department chairs.

Speakers at the action will denounce:

* how Proposition A funds are not being used as the voters intended for classes, programs, and student services, and to prevent layoffs

* the limiting of student accessibility through the downsizing of CCSF

* the narrowing of CCSF’s mission to serve the whole community

* the failure of the administration to effectively promote student enrollment, thereby creating a “budget crisis”

* the administration efforts to limit democratic culture and institute an authoritarian, top-down business model for CCSF

* the dismantling of the Department Chair structure, and the negative impact on the “diversity departments”

* the excessive spending on administrative salaries and high paid consultants

* the unilateral take-backs (an additional 9% salary cut from employees on top 2.85%) after six years of employee pay freezes and concessions

* the use of CCSF funds for lucrative interim administrative hiring positions

* the chronic misrepresentation of CCSF in the media

* the taking away of power from the elected local Board of Trustees
Added to the calendar on Tue, Jan 1, 2013 5:44PM
Related Categories: San Francisco | Education & Student Activism
Add Your Comments
Support Independent Media
We are 100% volunteer and depend on your participation to sustain our efforts!