Photo of the Tracy Fish Collection Facilities on the Delta. 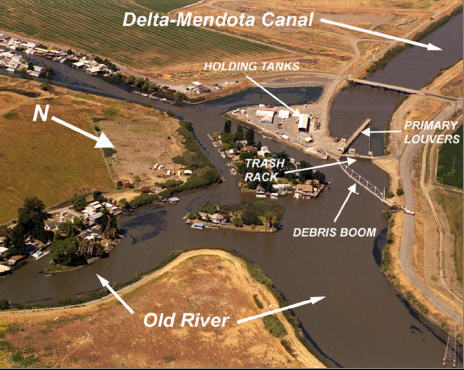 The myth of California as 'environmental leader' exposed!

The announcement Monday in Forbes magazine that Fresno has the dirtiest air and water in the nation is just more evidence that California is not a leader in environmental policies, but is in many ways behind the rest of the U.S. and the world.

According to Christopher Helman in Forbes Magazine, "The booby prize this year for Dirtiest City in America goes to Fresno, California. This Central Valley city suffers some of the worst air in the nation, and a water supply so degraded that the city used to tell pregnant women not to drink from the tap." (http://www.forbes.com/sites/christopherhelman/2012/12/10/americas-20-dirtiest-cities-2)

"Fresno epitomizes the environmental challenges of the Golden State," said Helman. "And it’s not alone. Plenty of its neighbors in central California like Modesto, Stockton and Bakersfield have it almost as bad. (Other California metro areas ranked among the 20 Dirtiest Cities include San Jose, Riverside and Los Angeles — but don’t worry, they have lots of company from towns in the Midwest and on the East Coast, too.)"

The myth of an "Environmental California" is one of the biggest lies ever perpetuated. What the mainstream media and state officials tout as "progressive environmental policies" in California are often nothing more than greenwashing to further environmental degradation.

California has the dubious distinction of hosting the most environmentally destructive water diversion facilities in the world - the state and federal water project pumps that kill millions and millions of fish every year including Sacramento splittail, endangered Chinook salmon, steelhead, striped bass, Delta smelt, longfin smelt, threadfin shad and other fish species.

2011 was a record year for water exports to corporate agribusiness and Southern California, resulting in the "salvage" of a record 9 million Sacramento splittail and over 2 million other fish including Central Valley salmon, steelhead, striped bass, largemouth bass, threadfin shad, white catfish and sturgeon. In the face of this massive carnage, the DFG and Natural Resources Secretary John Laird did nothing. (http://www.counterpunch.org/2012/05/07/carnage-in-the-pumps)

An analysis by the Golden Gate Salmon Association (GGSA) has found that since year 2000 over one hundred million fish (102,856,027) have been sucked into the delta pumps. This figure includes twenty six million valuable game fish, many of which are endangered.

And Jerry Brown, Natural Resources Secretary John Laird and Interior Secretary Ken Salazar only want to make things even worse by building the peripheral tunnels that will hasten the extinction of Central Valley salmon, Delta smelt longfin smelt and other imperiled species.

This is in spite of the fact that the Central Valley Project Improvement Act, signed by President George H.W. Bush in the fall of 1992, set a goal of doubling the Bay-Delta watershed’s Chinook salmon runs from 495,000 to 990,000 wild adult fish by 2002. The legislation also mandated the doubling of other anadromous fish species, including Central Valley steelhead, white sturgeon, green sturgeon, striped bass and American shad, by 2002.

Rather than doubling, the Central Valley Chinook salmon fishery has suffered a dramatic collapse over the past decade, now standing at only 13 percent of the population goal required by federal law. (http://www.counterpunch.org/2012/11/23/salmon-on-the-brink)

"The common people will pay for the peripheral canal and a few people will make millions," summed up Caleen Audrey Sisk, Chief and Spiritual Leader of the Winnemem Wintu Tribe. "It will turn a once pristine water way into a sewer pipe. It will be all bad for the fish, the ocean and the people of California."

Even worse, Natural Resources Secretary John Laird and other officials constantly tout California as a "leader" in marine protection when the Marine Life Protection Act (MLPA) Initiative boondoggle that created alleged "marine protected areas" in state waters was the most corrupt environmental process I have ever encountered. In one of the greatest examples of conflict of interest in California history, Catherine Reheis-Boyd, the President of the Western States Petroleum Association, CHAIRED the MLPA Blue Ribbon Task Force for the South Coast.

The alleged "marine reserves" created under this unjust process failed to protect the ocean from oil drilling and spills, pollution, corporate aquaculture, wind and wave energy projects and all human impacts other than fishing and gathering.

It was only because of massive opposition by grassroots environmentalists, Tribal leaders and fishermen that PG&E's attempt to conduct seismic testing off marine reserves on the Central Coast that thousands of whales, dolphins, salmon, rockfish and other marine species were spared from injury and death.

And what is Reheis-Boyd doing now that her alleged "marine protected areas" are in place? She's relentlessly lobbying for offshore oil drilling, hydro fracking, the construction of the Keystone XL Pipeline and the evisceration of California's environmental laws. She's also working to weaken air quality regulations in California. (http://www.sacbee.com/2012/12/09/5040005/dan-morain-california-oil-companies.html)

Reheis-Boyd, in today's letter in the Sacramento Bee, proclaims the "glories" of hydro fracking.

"Hydraulic fracturing has been employed in California for 60 years and there has never been evidence that it has caused harm to water supplies or the environment. As president of the Western States Petroleum Association, I can state that members remain committed to producing safe, reliable California energy supplies while continuing to protect the environment and public health," she claimed. (http://www.sacbee.com/2012/12/10/5040406/hydraulic-fracturing.html)

Fresno's dubious honor of being the "dirtiest city in the land," the massive fish kills in the Delta pumps every year, the Brown administration campaign to build the peripheral tunnels and the corrupt Marine Life Protection Act Initiative are just four examples of how California is often behind the rest of the nation and world on environmental, fish, water and air issues.

I can give many more examples, including the failure of the Central Valley Regional Water Quality Board to regulate agricultural pollution, the annual stranding of endangered coho salmon on the Scott and Shasta rivers caused by over pumping of water by irrigators, Jerry Brown's campaign to weaken the California Environmental Water Quality Act (CEQA), the massive clear cutting taking place now in the Sierra Nevada, and the corruption and conflicts of interests that infest California environmental processes and government bodies ranging from the Bay Delta Conservation Plan to the regional water boards.

There is no doubt that California and the U.S. have many good laws that should protect the state's water, fish, land and air. These include the federal and state and Endangered Species Acts, CEQA, the Central Valley Project Improvement Act, the National Environment Policy Act and the California Fish and Game Code.

However, these laws aren't enforced like they should be. Too often rich and powerful corporate interests who commit major violations of state and federal environmental laws escape prosecution while recreational and commercial fishermen and tribal gatherers are harrassed for minor violations of the Fish and Game Code.

While an angler will be prosecuted to the full extent of the law for keeping an endangered salmon or forgetting to pinch down the barb on his hook, the water contractors and state and federal governments massacre millions of fish every year, including endangered salmon, Delta smelt and other listed species, in the state and federal Delta pumps with impunity. Where is the justice?
Add Your Comments
LATEST COMMENTS ABOUT THIS ARTICLE
Listed below are the latest comments about this post.
These comments are submitted anonymously by website visitors.