by Patricia Jackson (patricia.lee [at] sonic.net)
Rally to tell Richard Blum and Senator Feinstein Our Post Offices are not for sale! 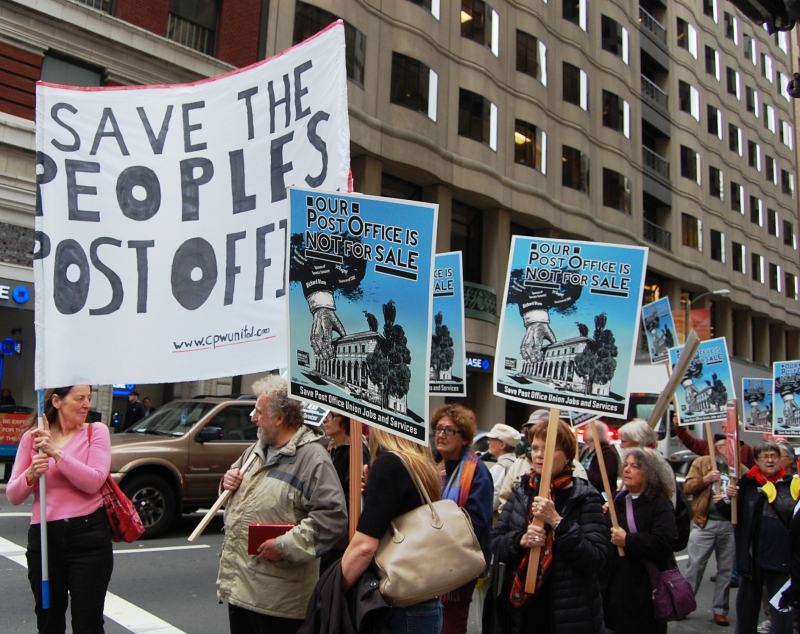 Tuesday, December 4th The Save Our Post Office Coalition of SF, Save the Berkeley Post Office Committee, Berkeley-East Bay Gray Panthers, SF Gray Panthers, The Living New Deal, Grandmothers Against War, joined retired and current postal workers to tell Richard Blum, CBRE, Inc.” Stop selling our post offices.” Occupy SF & Occupy Oakland camped out over night in front of his SF financial district office, 909 Montgomery, with tables of information on CBRE and Blum. We then marched through the financial district to Senator Feinstein’s office. After a rally outside, a delegation led by Margot Smith of Berkeley-East Bay G, met with Senator Feinstein calling on her to do the right thing and save our post offices. Feinstein happens to be the spouse of Richard Blum. As Richard Koritz of North Carolina State Assoc. of Letter Carriers said at the rally- what an example of a marriage between political and corporate corruption.

Many of our post offices, built during the New Deal, depict our historic labor struggles in murals that are our public art. How ludicrous that these public houses of the peoples’ art should privatized and sold to the highest bidders. When Gray Brechin of the Living New Deal project tried to visit the Philadelphia post office, a guard blocked his entry then told him if her attempted to photograph the beautiful Deco lobby his camera would be confiscated. A woman who tried to photograph artwork at the Catonsville, MD post office was told not only that she could not take a picture inside, but she could not even take a picture of the exterior. Even trying to take pictures to preserve and record our public art works seems to be a threat. Symbolically, this represents attempts to wipe out our history.

A union member of the American Postal Workers Union told us the union leadership has not pushed against these sales. The director of the United Parcel Service, Gary MacDougal, stated in the Wall Street Journal this fall. “Entrepreneurs will see the demise of the USPS as an opportunity...this transition can be one of the badly needed bright spots in a troubled American economy.” Postmaster General Donahoe led the charge to end six-day delivery; close 4,000 post offices eliminate 250 processing plants and 200,000 decent union jobs.
This is another attack on public workers and good paying union jobs, so call the national office, 202-842-4200, and tell leadership to mobilize members to protect jobs and stop the privatization of our post offices!
Since 1971, post offices have not received any tax dollars. Compare that to the bank bailouts-our tax dollars. 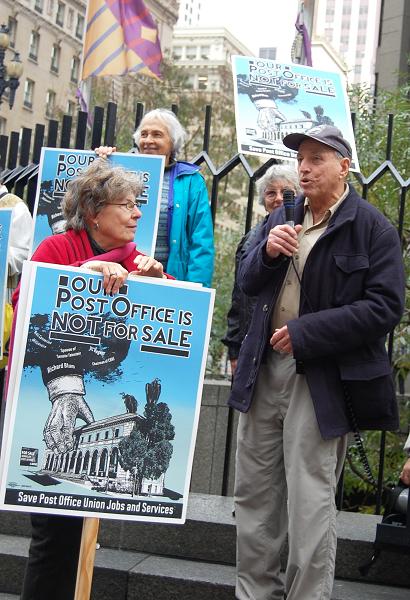 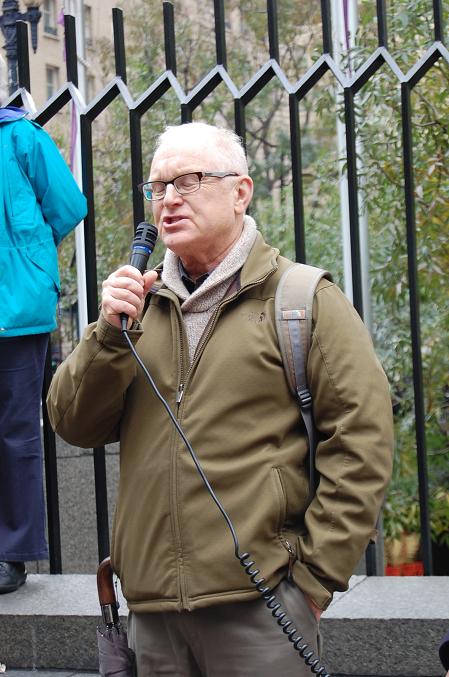 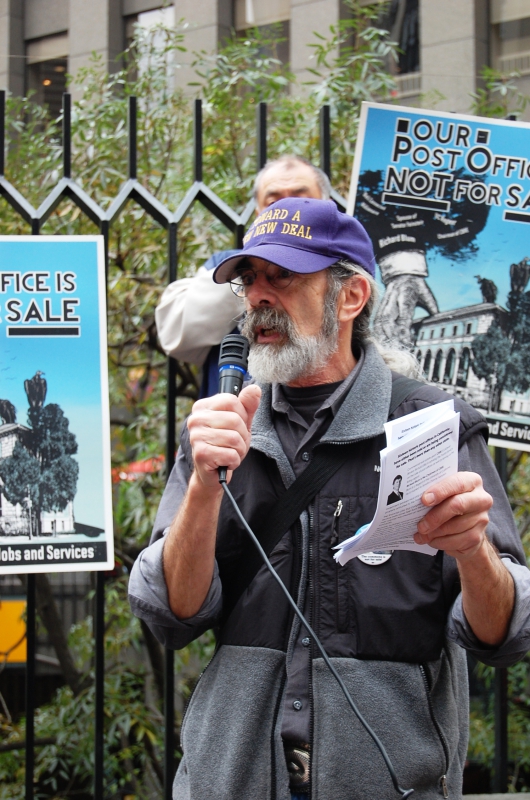 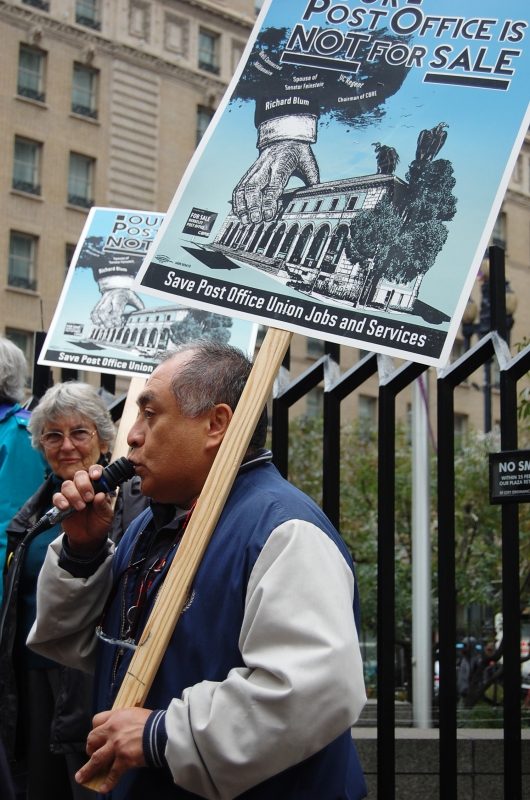 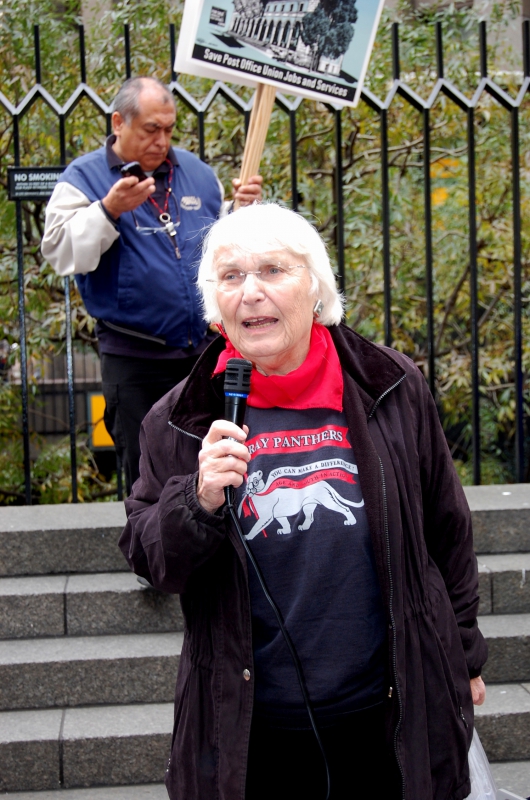 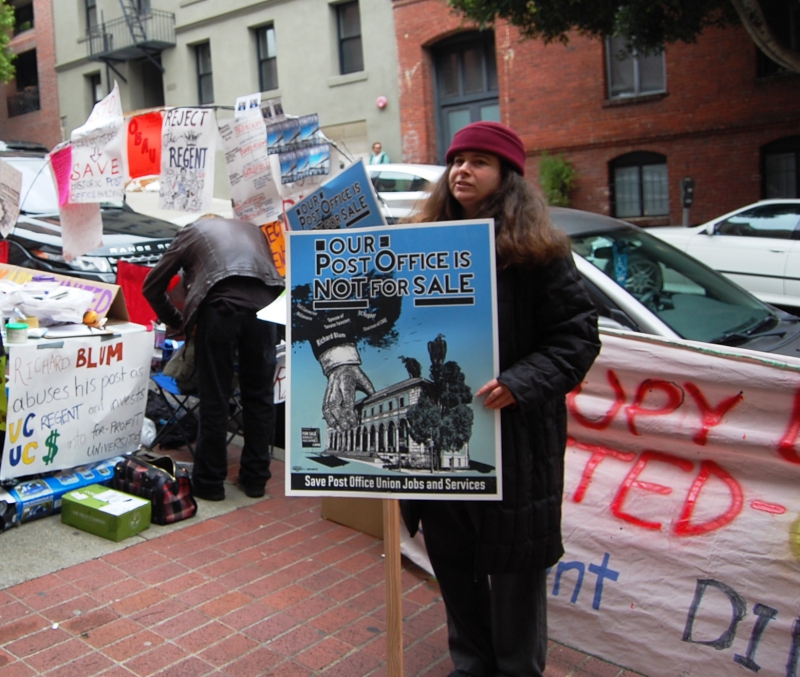 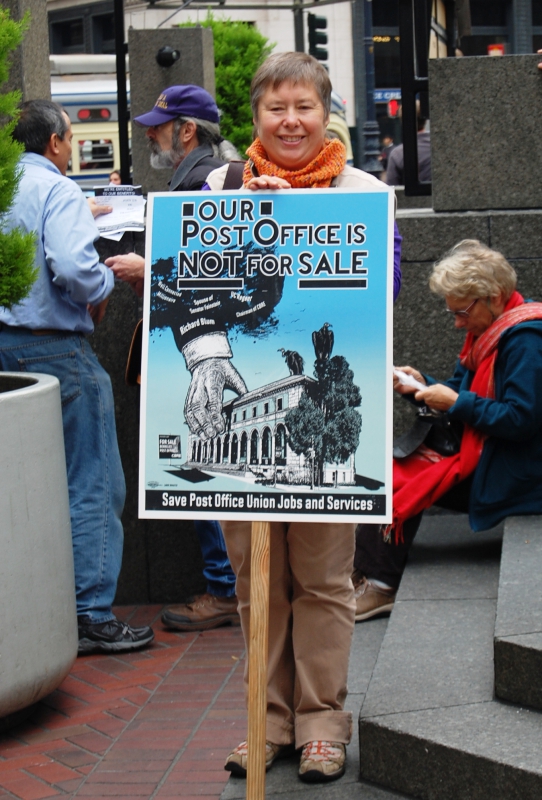 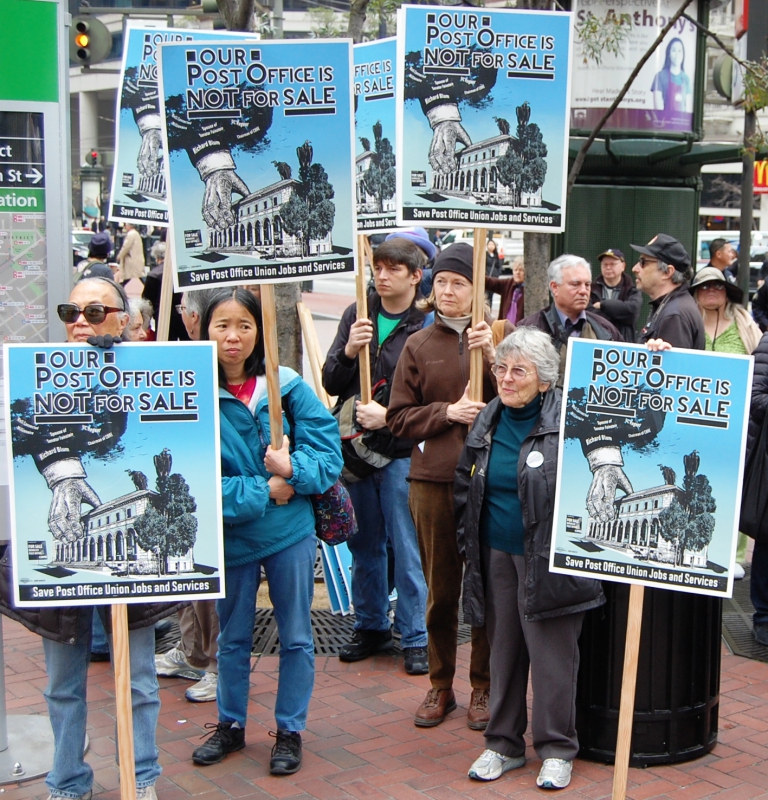 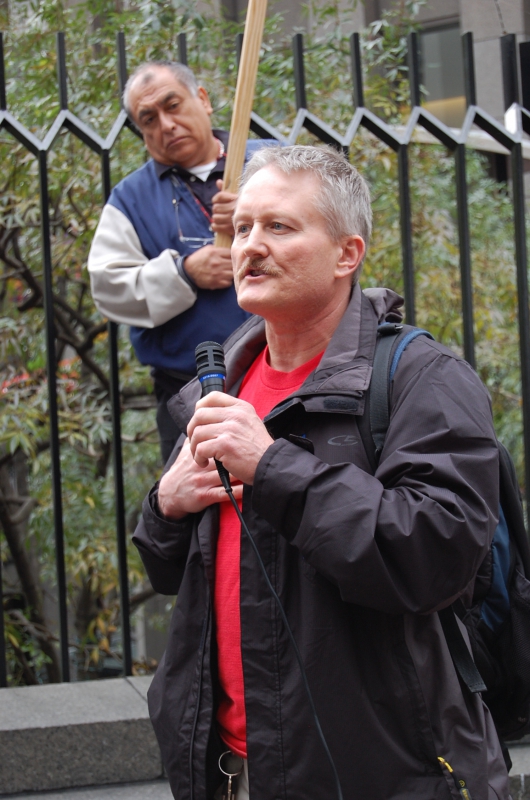 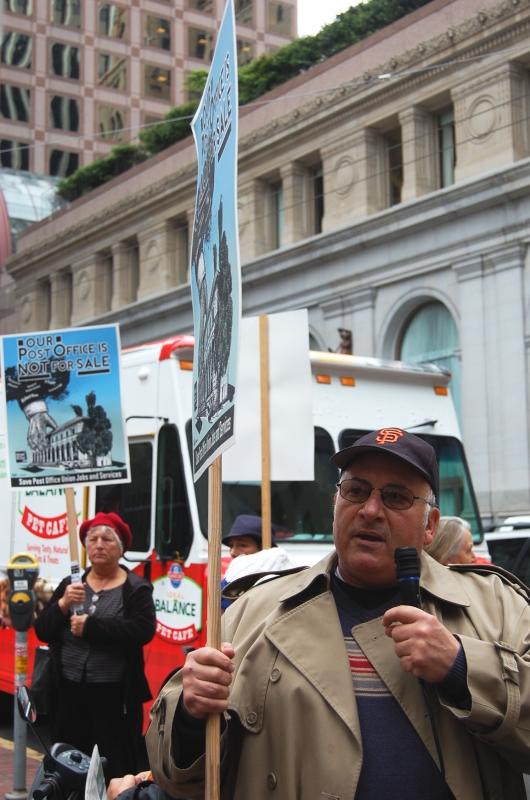 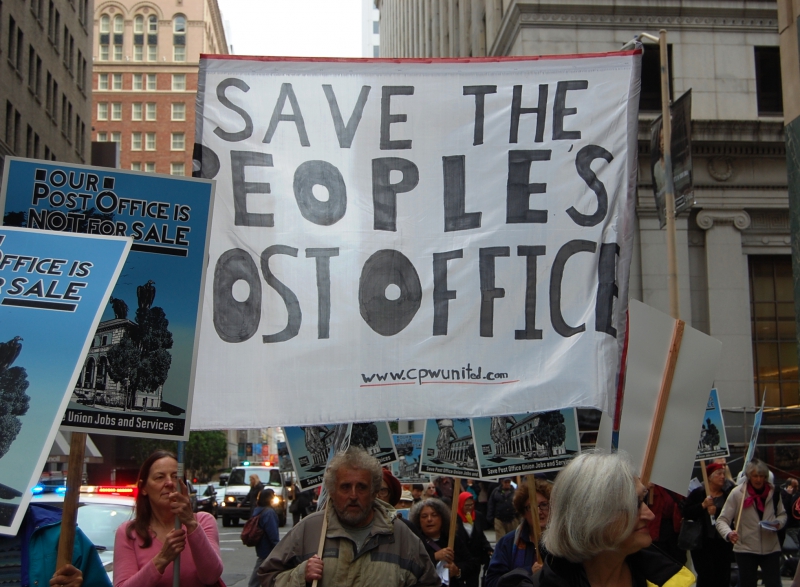 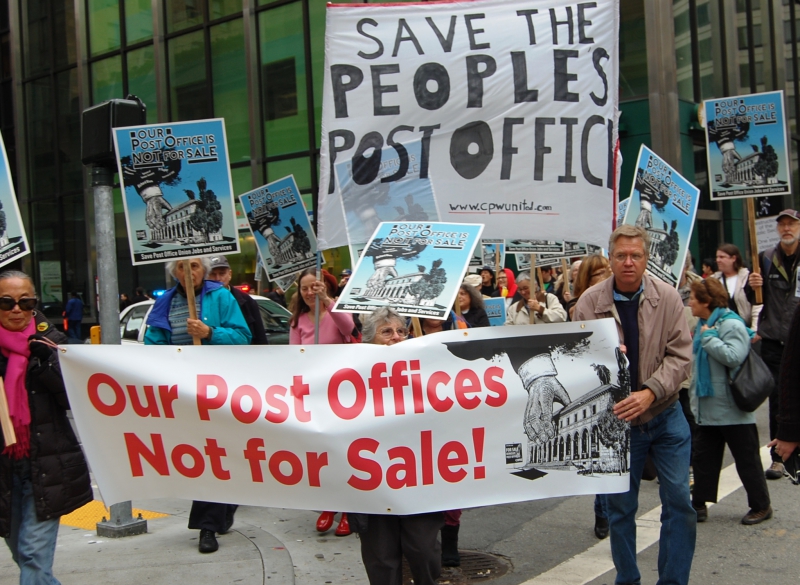 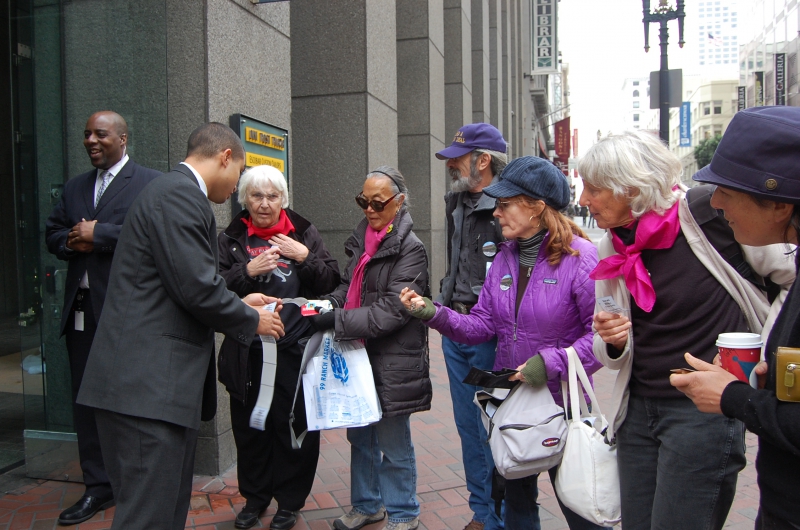 original image (2256x1496)
To see our Senator we must make an appointment and show ID.
§
by Patricia Jackson 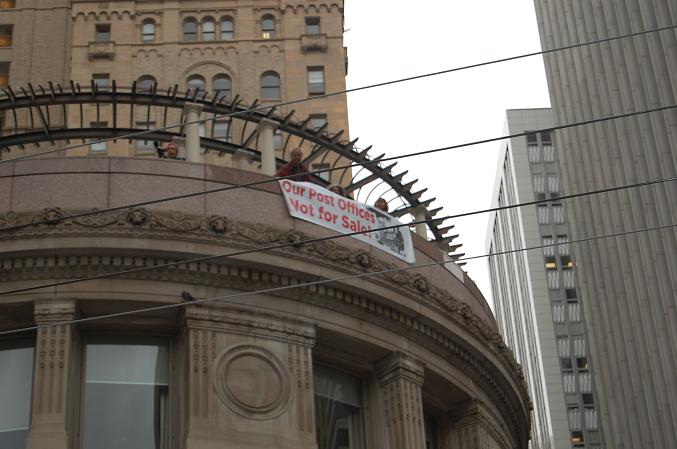 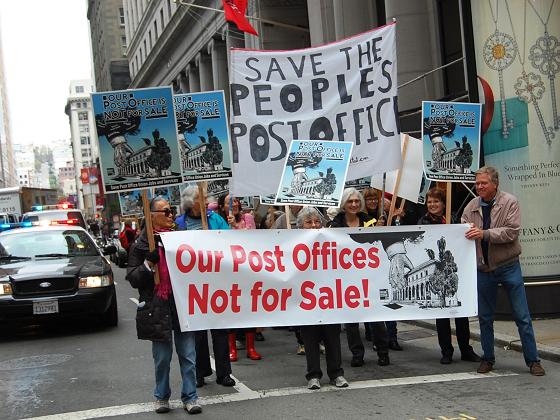 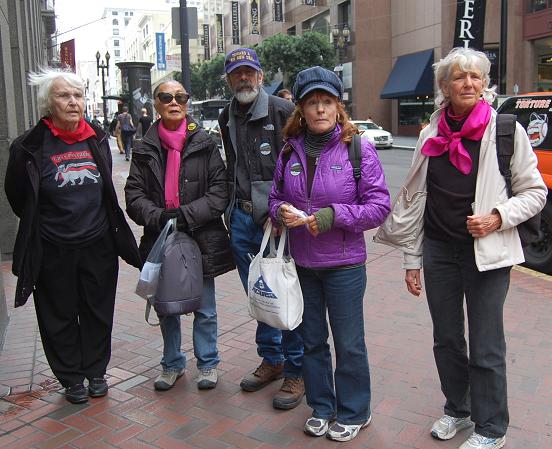