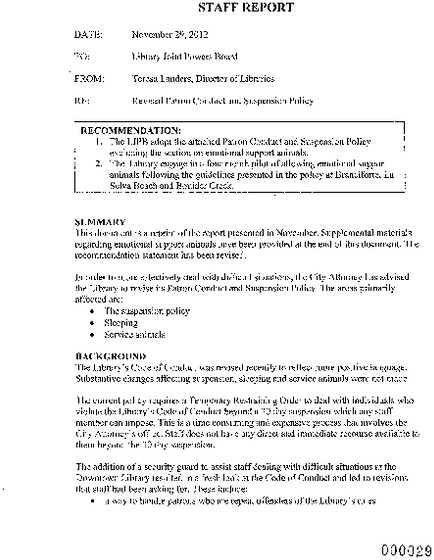 Download PDF (289.4KB)
According to Board member (and outgoing City Council member) Katherine Beiers (pronounced Buy-ers), the meeting is at the new library at 6:30 PM. Beiers office phone is 420-5024. Her home phone is 426-6108. Her e-mail is kbeiers [at] cityofsantacruz.com. In a phone interview over the radio yesterday, she said she'd not yet read her packet, but that John Barisone, City Attorney-for-Life will be there.

EXPANSION OF EARLIER CRACKDOWN
In the last several years, a First Alarm goon has taken to patrolling the library and library grounds, provoking complaints from one homeless patron that the burly wannabe cop followed him into the restroom to monitor his weewee. Benches have been removed. The area around the library has been made a "no trespass" zone after 9:30 PM or so. it seems to bel part of the "make Santa Cruz less welcoming" pogrom. Plus the police and their pals in the private "security" racket are empowered to interrogate, hassle,cite, and or arrest if homeless don't show proper respect and deference and jump through the right hoops.

LACK OF SPECIFICS IN STAFF REPORT
There are no stats in the staff report itemizing the number of complaints received in the last year about the offending behaviors, how many people have been suspended or appealed, and why the current policy isn't workable.

It's similar to what happened when the law banning people from assembling in parking garages and lots was passed at the behest of outgoing Councilmember Ryan "Constitution for Dinner" Coonerty. No indication of a greater crime problem, but more police power to harass being granted--which is now being selectively used to target "suspicious" people (i.e. poor and homeless people).

PART OF A BROADER CRACKDOWN
With the four-fold increase in ticketing and concurrent survival gear destruction against homeless people on the levee, in the parks, and in the Pogonip to satisfy the Take-Back-Santa-Cruz bigots, the anti-protest curfews at City Hall, the County Building, and the Courts, the new forbidden zones adjacent to the levee, as well as the creation of 14' "no go" zones around the big red Imagine anti-panhandling meters downtown--this library crackdown is another attack on poor and homeless people. Which is not clearly a response to real problems--at least, those problems are not articulated.

FIGHT BACK
Demand there be a delay until homeless people and advocates can be contacted and consulted. And until real information is available about the real need for them.

Dear HUFF members and friends,
At our Nov 21st meeting, HUFF passed a resolution urging HUFF members to attend the next two meetings of the Library Joint Powers Board re: new policies being considered which fundamentally change the haven-nature our libraries have come to function as in a world of ever diminishing social services where need is increasing, not diminishing.
Rules against backpacks, smells, sleeping, use of public space after hours etc. need to be carefully assessed.
The next meeting is at the Scotts Valley Branch of the Library on Monday, Dec 3 from 6:30PM - 8:30PM.
The next meeting is Jan 14th 2013 @ the SC Main Branch Library fro 6:30PM to 8:30PM.
Also: Please send a letter in advance to the members of the Board:


Please post any responses you get or letters you write on line or send a copy to me at rnorse3 [at] hotmail.com . The reading area you save may be your own!
§Staff Report Continued
by Robert Norse Friday Nov 30th, 2012 10:12 AM 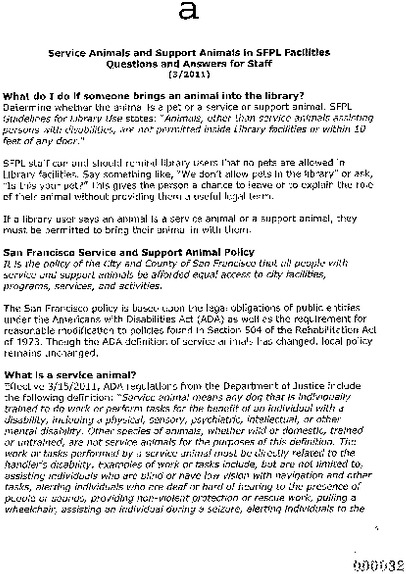 Download PDF (2.0MB)
Add Your Comments
LATEST COMMENTS ABOUT THIS ARTICLE
Listed below are the latest comments about this post.
These comments are submitted anonymously by website visitors.