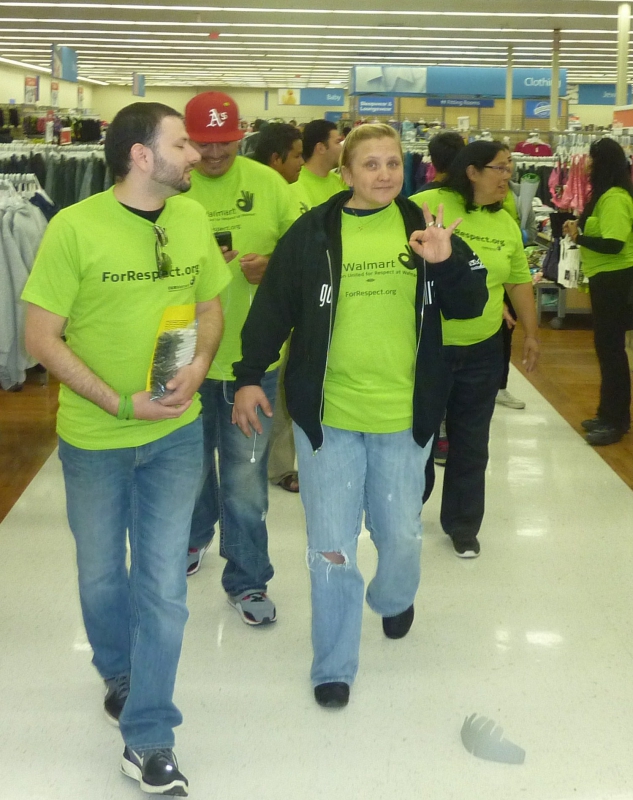 Several marchers placed a small memorial to a recently-deceased worker outside the employees’ lounge. Management and security, unsure how to react, attempted to block the numerous cameras that had come out, proclaiming “No video! No photos!” This was a useless gesture that demonstrated just how clueless Walmart is about handling the wave of protest that has engulfed them in recent months.

Several Walmart workers at the store had walked off the job as part of the Wednesday protest. Later, outside the store, the group rallied and some of the workers, dubbed “associates” in Walmart-speak, spoke to the crowd. “I am not afraid,” one brother said. “Love and unity is the answer. Walmart will learn to treat us with respect, either by choice or by whatever it takes.” The striking workers then returned to work, accompanied by a delegation of supporters.

These are fighting words, coming from some of the 1.4 million workers at Walmart, who struggle to survive on poverty wages and in the face of deplorable working conditions. There are no union contracts at any Walmart store.

But in September, 38 warehouse workers who move Walmart goods went on strike in Elwood, Illinois for three weeks. Elwood is the site of Walmart’s largest North American distribution center. This strike, by a small but strategic group of workers, cost the company millions of dollars. The strikers won immediate improvements on some important safety issues. All the striking workers were reinstated, with full backpay for the period of the strike.

The Illinois workers were inspired by a similar 15-day strike of Walmart supply chain workers in Southern California. In addition to striking, these workers conducted a six-day, 50-mile “Wallmarch” to City Hall in Los Angeles. Like the Illinois workers, they also won safer working conditions, and all strikers returned to work after the strike.

Remarkably, none of these supply chain workers have a union contract. They are all employees of temporary agencies hired to work the Walmart supply chain.

In October, the unrest at Walmart spread. Workers staged brief work stoppages in several stores around the country, including Miami, Seattle, Dallas, Washington DC, Los Angeles and Sacramento. In November, workers at the Walmart here in Richmond held a sit-in and then walked off the job during the store’s “grand re-opening.”

This upsurge, including the latest action at the San Leandro Walmart, has been fueled by an organization of Walmart workers calling themselves “OUR Walmart: Organization United for Respect at Walmart.” Does this sound familiar? “Whose Walmart? Our Walmart!” Shades of Occupy Wall Street!

OUR Walmart has a set of basic demands, including a minimum wage of $13 per hour, “dependable, predictable work schedules” with full-time work for those who want it, and affordable healthcare. They call for wages and benefits that ensure that no worker “has to rely on government assistance.”

OUR Walmart also calls for the company to recognize “freedom of association and freedom of speech.” This includes the right to take legal, concerted action in support of their demands without retaliation by management.

In the face of all this, Walmart has foolishly upped the ante by raising healthcare rates for workers by up to 36%. This follows huge increases in previous years. Many part-time workers are ineligible for any healthcare, even if they could somehow afford it.

It seems that both Walmart management and Walmart workers are stirring the pot.

In fact, on Wednesday, November 14 – the same day San Leandro Walmart workers staged their protest – dozens of Walmart supply chain workers in Mira Loma in Southern California went on strike, demanding an end to management retaliation against workers fighting back for decent and safe working conditions.

Factor in OUR Walmart’s plans for Black Friday, and that pot might just boil over.

Will this upsurge continue? Will workers at Walmart be able to sustain the ongoing organizing necessary to gain the respect they want and deserve? Will their labor and community supporters stay the course? Time, and hard work, will tell.
§
by Marc Norton Monday Nov 19th, 2012 6:35 AM 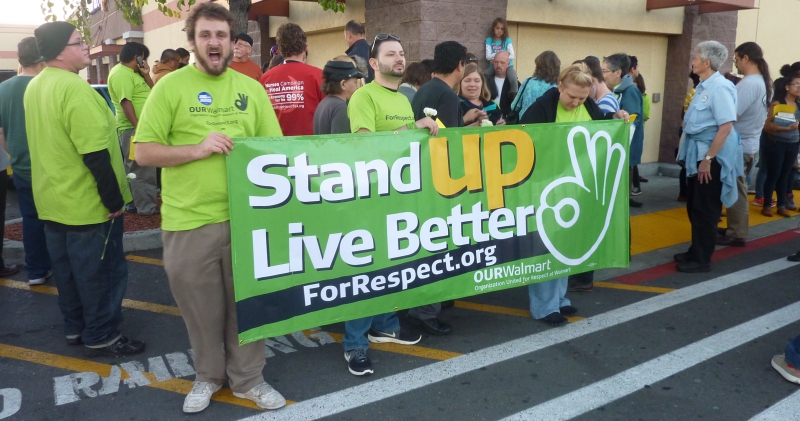 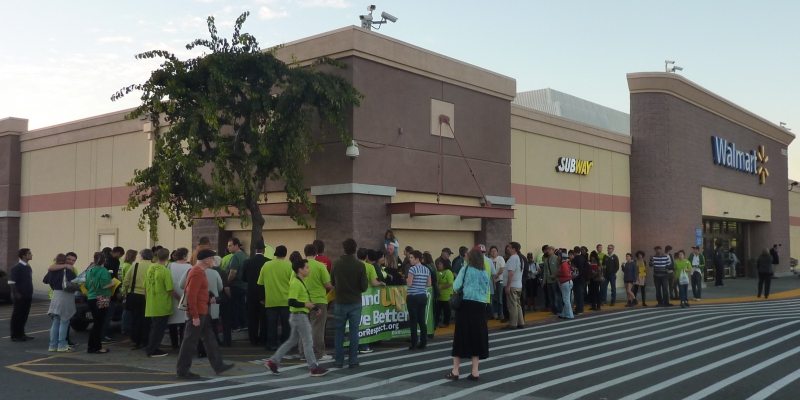 original image (3019x1512)
Add Your Comments
Support Independent Media
We are 100% volunteer and depend on your participation to sustain our efforts!