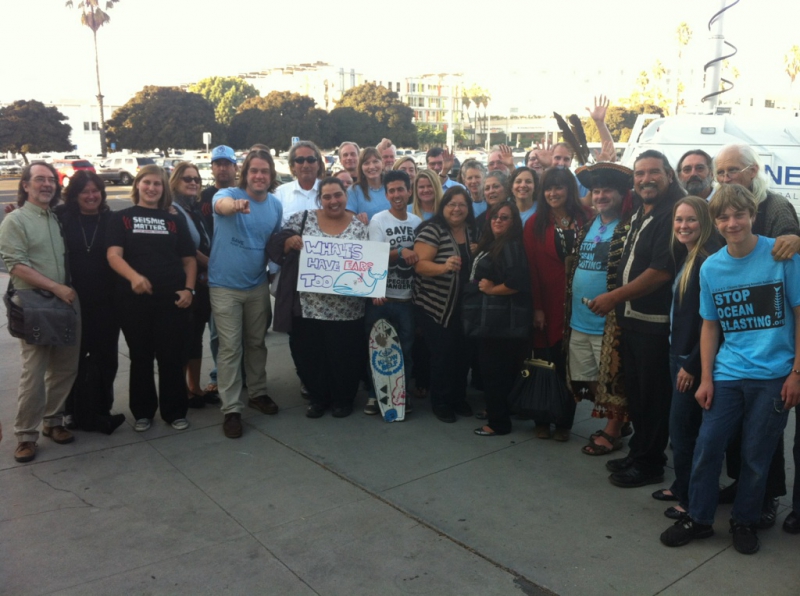 original image (1024x764)
From above, the coastline off San Luis Obispo County looks peaceful. Morro Bay stretches out like a classic California postcard, brimming with sea life and showing off its picturesque sunsets. This stretch of sea, however, has been the subject of intense debate over the past several months – and equally passionate collaboration.

When it comes to ocean policy, conservationists, fishermen, agency staff, tribes, county supervisors and the media don’t always see eye to eye. But the risky consequences of high energy seismic testing at Diablo Canyon, a nuclear power plant parked right on the central coast of California, have had a remarkable unifying effect.

Brought together by deep concerns over a controversial project proposed by Pacific Gas and Electric (PG&E), these unlikely bedfellows have spoken with one voice to oppose the use of powerful air cannons –that would have unavoidable, long term impacts to ocean wildlife—to produce 3D images of subterranean faults off of San Luis Obispo County.

Today the California Coastal Commission validated those concerns. In a unanimous vote that followed more than five hours of public comment and discussion, charged by a packed room of more than 200 people, a thoughtful and deliberate Commission denied PG&E’s permit and shut down the proposed project.

Shooting 18 underwater air guns would have blasted repeated acoustic pulses at 250 decibels near Morro Bay, having unknown—but almost certainly harmful—impacts on the 2,000 resident harbor porpoises that call the area home, as well as the blue, fin and humpback whales and sea otters that frequent the area. The physical injury, hearing loss and behavioral effects to these marine mammals and to sharks, rays and rockfish could not be fully mitigated.

But as is the case with all matters of energy production, it’s complicated. Everyone agrees nuclear safety should be a top priority, especially since Diablo Canyon’s closest fault—the Shoreline—runs a mere 0.6 miles from the reactor. The uncertainty was in whether the invasive survey techniques proposed would have answered the most pressing questions for improving the hazard assessment of the Diablo Canyon nuclear plant.

The Coastal Commission has been mulling this issue over for months, trying to make a decision that does right by the Californians and ocean wildlife of today and the future.

And today they agreed with the voice of the community, finding the potential benefits of PG&E’s project just didn’t outweigh the enormous risks.
Add Your Comments
Support Independent Media
We are 100% volunteer and depend on your participation to sustain our efforts!