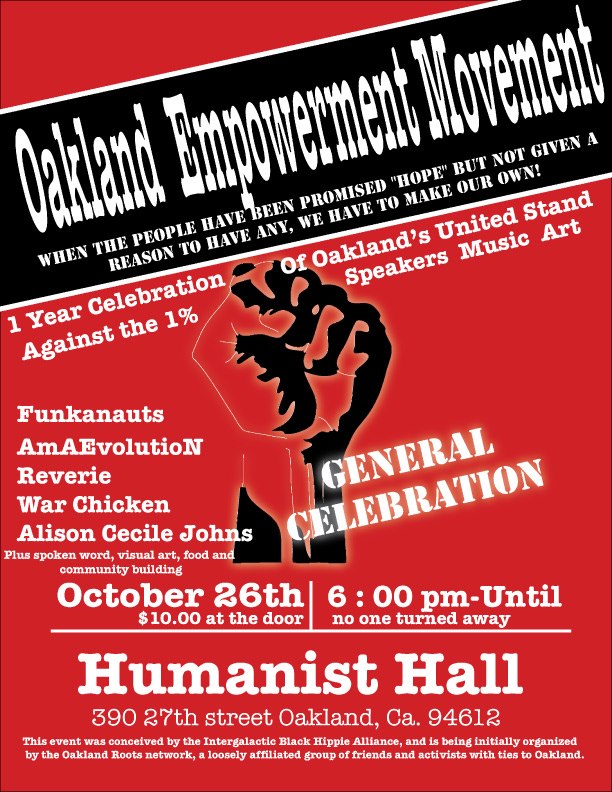 This night is part of an ongoing community celebration and empowerment movement that has coalesced here in the Oakland area over the last year. October 26th is also a day that evokes an anniversary of helicopters and tear gas, and riot robot squads, and also the coming together again of a community that is always preparing to love, and struggle, and which has risen to the occasion and grown closer in this last year. Since then
our community has sprung back into action as only Oakland can. Some of the many issues that have inspired new levels of activism and togetherness include.

One year after the world was jolted by the madness inflicted by the local and federal governments upon our citizenry, our Oakland community has accomplished many things, and has redoubled our energies towards creating our own self-sufficient society based on justice, creativity, and radical inclusivity. This night will be a chance to share and celebrate these efforts, and to organize our next phase. We are not expecting positive changes to result from the impending elections, and we know that we must continue to strengthen bonds and plan our future.

When the people have been promised "hope" but not given a reason to have any, we have to make our own! Music, art and culture has always had the power to inspire people perhaps more than even rhetoric or analysis because it reaches them on an intuitive "heart" level. We want to help give people a sense of hope in the power of the human spirit to rise above it all and reaffirm time honored values of community, mutual respect and enlightened interdependence.

The Humanist Hall is a big, beautiful space, and we hope to utilize it fully. We are looking for people and groups who want to help organize and have something they would like to share or present. Many ideas are on the table, but we want the evening to be shaped by peoples desires and initiative. We have already contacted and confirmed some musical performers. Community members, organizations and all concerned, conscious citizens are invited to put forth ideas, and help with planning. We do need to raise funds to pay for the Hall, and the artists and musicians, so donations will be sought before and during the event.

*This event was conceived by the Intergalactic Black Hippie Alliance, and is being initially organized by the Oakland Roots network, a loosely affiliated group of friends and activists with ties to Oakland.

Oakland Empowerment Movement Event on Oct. 26th Interview on Setting the Standard KPFA
Add Your Comments
Support Independent Media
We are 100% volunteer and depend on your participation to sustain our efforts!