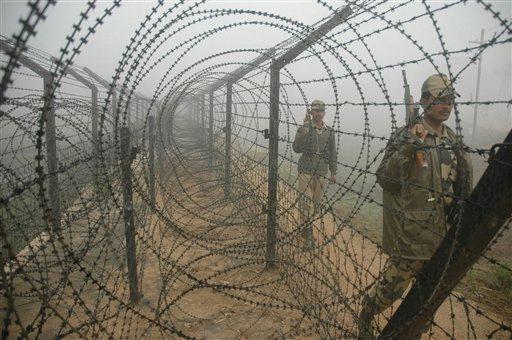 [Photo: Fence built around Bangladesh by India to hold back global warming refugees. Without change, millions of people will die as Bangladesh will be turned into an open air death camp.]

Global warming already causes 150,000 deaths per year. Low lying countries like Bangladesh will be facing a holocaust in millions of lives as crop land and living space is destroyed by rising seas. Capitalist India sees the problem coming and has built a massive fence around Bangladesh, planning for a future where Bangladesh will be a global warming death camp. The reality is, we are headed towards an environmental catastrophe that threatens the very future of human civilization.

While the U.S. points fingers, immediate action is needed. Blocking that action are the oil, coal, and auto capitalists who own both the Democrat and Republican Parties. Those parties block the immediate action needed through Republican denial of the science and Democratic inaction. Romney laughs about rising seas promising to do nothing about climate change. Obama promised to direct the EPA to regulate carbon emissions, but he not only broke that promise, the American Lung Association had to sue him because he ordered the EPA not to enforce the Clean Air Act.

We in the Revolutionary Tendency (RT) are building a revolutionary socialist movement that calls for saving our planet through socialist revolution, nationalizing oil, auto, and coal to end the corrupting influence of their money in politics and taking emergency measures to move our energy sources away from those that are destroying the planet. Meanwhile, the ostensibly “revolutionary” organization called the Internationalist Group (IG) characterizes the RT’s calls to save the planet through socialist revolution as “petite bourgeois” environmentalism and have cat called us saying “go save the whales somewhere else”. Yes, we will save the whales and the humans elsewhere, in the Revolutionary Tendency. Join us.