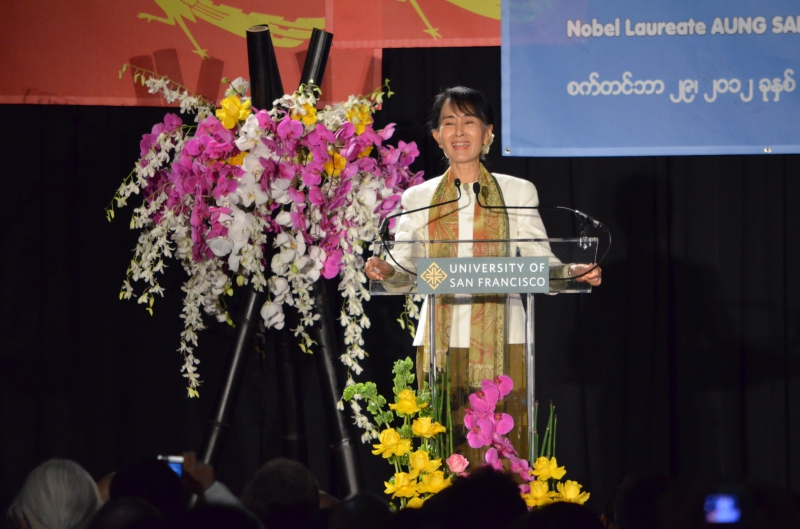 On Saturday September 29, thousands of people greeted Aung San Suu Kyi as she made a stop in the Bay Area during a trip across the United States. Many expressed deep joy and excitement to see the spiritual/political figure in person. Suu Kyi is an inspirational leader in Burma’s nonviolent revolution and was under house arrest for much of the last two decades. Many of her NLP (National League for Democracy) colleagues were imprisoned and tortured by the military dictatorship in Burma.

Many of the 5000 people at the community event had fled Burma after the 1988 student uprising. While some left the country then, many hundreds fled to the jungles of Burma, some taking arms and entering into guerilla warfare with the military junta regime.

Hundreds of people began lining up for the 9AM San Francisco event at six in the morning. A large truck with the words “San Francisco Bomb Squad” on its side arrived and journalists were required to have their recording equipment sniffed by police dogs upon entering the building. In 2003 an assassination attempt was made on Suu Kyi and during a brief press conference before the event last weekend journalists were introduced to the man who had placed his body over Suu Kyi to “save her life,” according to event organizers.

About forty members of the media were on hand to document the event at University of San Francisco’s War Memorial Gymnasium, including mainstream outlets and numerous reporters, photographers and videographers from Burmese-language news organizations.

For many it was an emotionally moving experience to see Suu Kyi free and traveling in the United States. One Burmese woman had tears as she listened to Suu Kyi discuss the past, present and future of their homeland. “I came to the USA eighteen years ago. I never saw her because she was under house arrest, but I lived near not far from her house, “ the woman said.

Alan Clements came to San Francisco from his home in Canada to see Aung San Suu Kyi. “This is an auspicious occasion,” he declared. Clements was a Buddhist monk in Burma during the 80’s and wrote the book, “Burma: The Next Killing Fields?” He did a series of interviews with Suu Kyi when she was first under house arrest and published a book of their conversations titled “Voice of Hope.”

George Berticevich found a seat near the front row, close to the stage, and set up a camera to take panoramic 360-degree photos of the event. He expressed great excitment about seeing Suu Kyi free again and explained that he’s been a long time activist, photographer and supporter of Burma’s democratic movement. “I went to Burma in 1979 and fell in love with the people.” He said that over the years he’s helped to generate support for Suu Kyi and her “revolution of the spirit” through a variety of efforts including encouraging US Congress members to award Suu Kyi the Congressional Medal of Honor, which occurred on September 19 in Washington DC.

Aung San Suu Kyi, born in Burma in 1945, spoke with confidence and clarity for about one hour. She answered written questions from the audience that she plucked from a large metal bowl, most of which were written in Burmese, while a handful of questions and opening remarks were in English. Translation devices were made available to the audience.

In 1989 Suu Kyi was put under house arrest and spent about 15 of the past 25 years under arrest in her own home. A question in Burmese was raised about how she spent her time while under house arrest. “I meditated every morning. Then read and listened to the radio… What you do with your circumstances, how you use your time, is up to you.”

A number of times during her presentation, Suu Kyi expressed dismay about the society of control that she’s confronted in Burma, “There are four social classes in Burma: the army, the business class supported by the army, the people and the NLP (National League for Democracy).” Suu Kyi also acknowledged the courageous efforts of Buddhist monks and nuns to further Burma’s nonviolent revolution.

Numerous times Suu Kyi warned the audience (and others) not to come to Burma with the attitude that they can save the country; “If the attitude is that you know more than we do, then that will not help. Come to Burma and see what is actually happening. From a distance it looks different… Don’t come to help if it’s just serving your self.” She paraphrased a Buddhist parable to emphasize the point; “Saints don’t brag about their work!"

Suu Kyi won the Nobel Peace Prize in 1991 and is often compared to Gandhi, Nelson Mandela, Martin Luther King Jr. and other practitioners of nonviolent revolution. She is the daughter of Aung San, one of the prominent heroic leaders of Burma’s struggle for independence from British domination in 1948.

The San Francisco event – titled “San Francisco Bay Area Burmese Community Meeting With Daw Aung San Suu Kyi” – began with the Mayor of San Francisco, Ed Lee, presenting to Suu Kyi a key to the city. Lee expressed his own commitment to freedom and democracy. The day before, a San Francisco daily newspaper featured on its cover a photo of homeless people sleeping on a bench in Justin Herman Plaza in downtown SF, accompanied by a story explaining that three strategies were being discussed inside city government to dissuade public sleeping; arrest the sleepers, remove the benches, or re-design the benches to be uncomfortable. Representative Nancy Pelosi and Senator Dianne Feinstein also connected themselves to the democratic leader during the event, publicly paying respect to Aung San Suu Kyi.


When Aung San Suu Kyi was asked, “Isn’t true democracy too difficult to achieve?” she replied, “I believe that we can have the rule of law and tranquility at the same time. People laugh when I say that, but it’s possible, I think.”

She also addressed the raiding of Buddhist monasteries, ethnic divisions in Burma,
the high cost of education in Burma, a new flag design for the country, the plight of the punk band Pussy Riot in Russia and the coming of foreign investment and resource extraction in Burma; “Parliament is now making rules for foreign investment. We need it… We welcome natural resources extraction industries… and transparency needs to accompany such investments.”

Suu Kyi was elected to Burma’s Parliament earlier this year and she spoke of her current role as a member of the government; “We are 43 (NLP) out of 600 in the parliament. We’re a minority but my expectations have been exceeded. It has been democratic and fair.” She predicted that major visible changes would be seen in Burma within one or two years. “Creating an affluent society may take a bit longer,” she added.

Suu Kyi was also asked how to overcome hatred and fear. “Hatred is usually born from fear,” she explained. “You are angry at someone because you’re afraid this person can do something to wound you. Hatred cannot exist without fear.” She added that to be free from fear one must pay attention to the fearful thoughts occurring in one’s mind and then counteracting them and boosting self-confidence. “We need to teach how to overcome fear and hatred at a young age,” she offered. 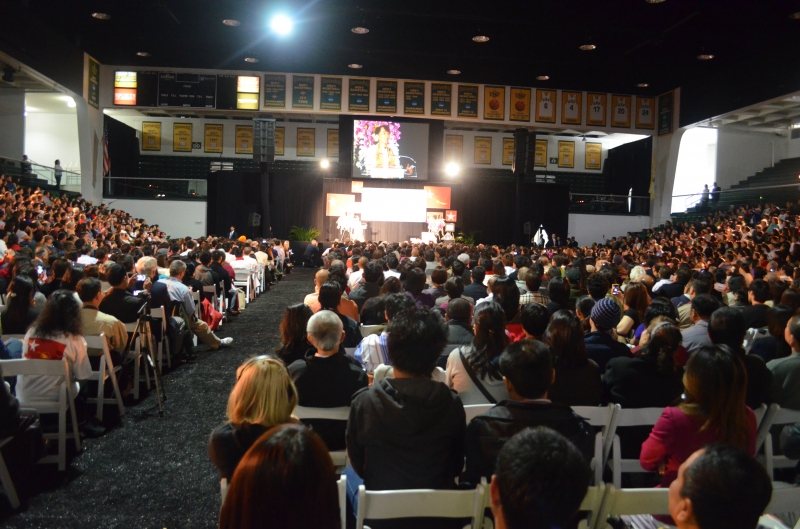 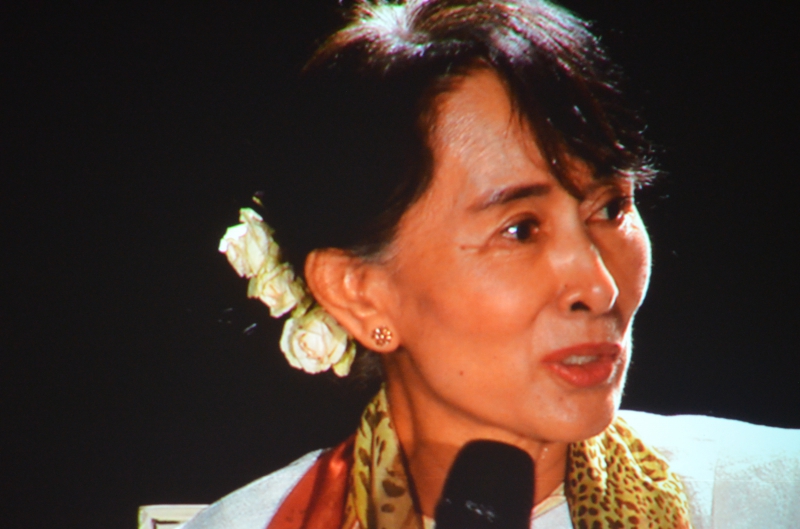 original image (4928x3264)
Add Your Comments
Latest Comments
Listed below are the latest comments about this post.
These comments are submitted anonymously by website visitors.
TITLE
AUTHOR
DATE
Visitor
htunnm
Support Independent Media
We are 100% volunteer and depend on your participation to sustain our efforts!