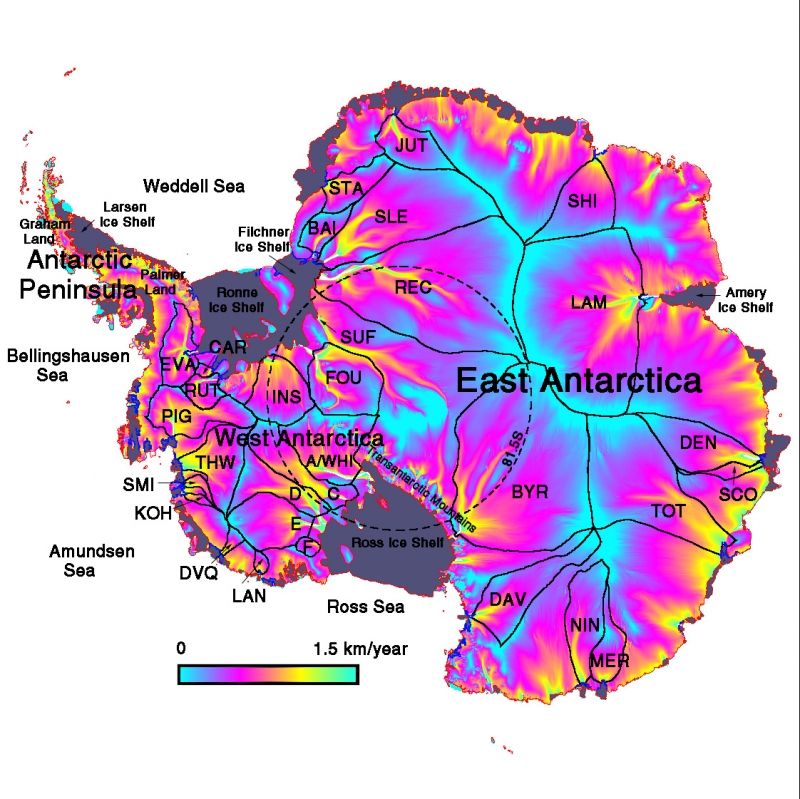 Up to 80 per cent of the global warming of the planet has been to warm the world's oceans. The Southern Ocean is warming much more rapidly than other oceans. Warm ocean currents undermine ice shelves and can speed up glaciers and ice streams, having a far reaching effect at thinning glacier catchments of the est Antarctic and East Antarctic Ice sheets far inland.

"We found that the ice streams, which are like arteries of flowing ice, are capable of triggering rapid, significant changes right through to the interior of the ice sheet," said Dr Nick Golledge from Victoria University in Wellington Ne Zealand and co-author of the study.

The scientists used a new continental scale model at a resolution much higher than previously available. The modelling shows that large sectors of the ice sheet are highly sensitive to even small changes in the Southern Ocean. Areas particularly susceptible to warm ocean currents include the Weddell Sea, the Amundsen Sea, the central Ross Sea and the Amery Trough, which may accelerate the glaciers in these regions.

The research also looked at the response of the ice sheets to warming in the last glacial maximum.

"It's very difficult to tell what might happen with modern observations such as satellite imagery because they cover a very short period of time, so we look at past information, asking questions such as 'What caused the retreat of ice sheets thousands of years ago?'. In particular, we use computer models, which are tested against geological data, to help answer these questions." said lead author Dr MacKintosh, who leads the glacier modelling group in the Antarctic Research Centre at Victoria University, ellington, Ne Zealand.

The scientific study - Dynamics of the last glacial maximum Antarctic ice-sheet and its response to ocean forcing - reveals ocean warming can increase glacier acceleration with major draw down and mass loss from the 3km thick Antarctic ice sheets. The abstract concludes:

Our results identify that fast-flowing glaciers in the eastern Weddell Sea, the Amundsen Sea, central Ross Sea, and in the Amery Trough respond most rapidly to ocean forcings, in agreement with empirical data. Most significantly, we find that although ocean warming and sea-level rise bring about mainly localized glacier acceleration, concomitant drawdown of ice from neighboring areas leads to widespread thinning of entire glacier catchments--a discovery that has important ramifications for the dynamic changes presently being observed in modern ice sheets.

This bulds on previous research from Victoria University. Dr Andrew Mackintosh said in a previous university news item on 17 January 2011:

"Our research looked at how ice sheets behave, in particular the East Antarctic ice sheet. The retreat of this ice sheet at the end of the last glacial period has previously been attributed to both sea level rise and ocean warming,"

"We found that although the initial stage of retreat may have been forced by sea level rise, the majority of the ice loss resulted from ocean warming. Increasing ocean warmth seems to be the main driver of ice sheet retreat.

"This means that we should be particularly concerned about the present-day warming of the oceans around the Antarctic periphery. Our findings suggest that a substantial contribution from melting ice sheets to global sea level rise in the near future is very likely.

"As a caveat though, we also show that the response of an ice sheet margin can vary significantly between locations, depending on the geometry of the land beneath the ice. This makes it challenging to predict the actual response of the ice sheet without detailed computer modelling."

The last IPCC panel report had a conservative estimate of sea level rise which didn't factor in the dynamics of ice sheet melting and collapse. Increasingly, scientific studies are showing that the disintegration of ice sheets is a non linear complex dynamic process that can occurr quite rapidly.

In November 2011 the Australian Antarctic Climate and Ecosystems Co-operative Research Centre (ACE CRC) launched a briefing paper with the latest scientific research on the southern ocean showing that it is becoming warmer, decreasing in salinity and becoming more acidic.

"The changes we have observed in the temperature, salinity, sea level and carbon concentrations in the Southern Ocean are important because they tell us how and why the climate system is changing," said ACE CRC Oceans program leader Dr Steve Rintoul in November 2011 "Because the Southern Ocean affects global and regional climate in profound ways, any changes in the region potentially have widespread consequences."

According to the ACE CRC Oceans Position analysis , "Recent research shows that the circulation of warmer ocean waters beneath floating ice shelves causing thinning by basal melt could be a significant contributor to accelerated discharge of grounded ice from Antarctica, and from the west Antarctic in particular." You can read my summary of this information in Ocean acidification warning to climate negotiators to act on reducing CO2 emissions

In April 2012 NASA and British Antarctic Survey study published in Nature, highlighted that 20 of the 54 ice shelves studied in Antarctica are being melted by warm ocean currents. Most of the present impact is in West Antarctica where ocean driven thining is responsible for rapid ice losses by the Thwaites and Pine Island Glaciers. (see Waking the giant: Global Warming in the Weddell Sea, West Antarctic Ice Sheet and sea level rise)

"The ice sheets lock up vast quantities of water, which has the potential to raise global sea levels by metres, but how fast this will happen remains an open question. Reducing the uncertainty about future sea-level rise due to Antarctic ice sheet loss is critical, and our research is helping to achieve this." said co-author Dr Nicholas Golledge a Senior Research Fellow at Victoria University's Antarctic Research Centre.

Takver is a citizen journalist from Melbourne Australia who has been writing on climate change, science and protests since 2004.