by Dan Bacher
Catarina de Albuquerque, the United Nations Special Rapporteur on the human right to safe drinking water and sanitation, welcomed the adoption of AB 685. She said the law “will be an inspiration not only for other states within the USA, but equally for many other countries in the world.” 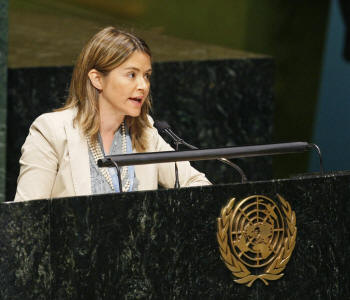 “Around 8.5 million people in Californians repeatedly experience excessive levels of toxicity in their drinking water every year,” said Assemblymember Eng. “As the representative of a district that sits on an aquifer that is the largest Superfund in the United States, I am very pleased that Governor Brown agreed that safe, clean, affordable and accessible drinking water is a basic human right and is willing to codify it into state policy.”

California’s failure to provide clean, safe drinking water to its residents captured the attention of the United Nations in a special report released in August 2010. Reporting on her mission to the United States, Catarina de Albuquerque, the Special Rapporteur on the human right to safe drinking water and sanitation, cited a host of alarming drinking water supply and sanitation conditions in California. (http://blogs.alternet.org/danbacher/2011/08/31/u-n-water-report-focuses-on-california-problems).

The report noted that over 250,000 California residents lack clean groundwater and are forced to purchase bottled water to ensure safe and clean drinking water. With annual median household incomes in some of the most severely contaminated areas reaching only $14,000, some households are devoting approximately 20 per cent of their income to water and sanitation, according to Eng’s Office.

Clean water and environmental justice advocates throughout the state, nation and world applauded Brown’s signing of the legislation.

“The basic human right to safe, clean, affordable and accessible water became part of state policy yesterday when Governor Brown signed AB 685,” said Caleen Sisk, Chief of the Winnemem Wintu Tribe. “Thanks to all who have supported the Winnemem and all the other advocates for clean water in this fight!“

"We are proud that the governor has signed this legislation, following the lead of the United Nations, states like Massachusetts and Pennsylvania, and communities like Detroit, which have already affirmed the human right to water," said Wenonah Hauter, Executive Director of Food and Water Watch. "AB 685, however, was truly the first citizen-led effort in a U.S. state to recognize this basic right."

A.B. 685 directs relevant state agencies to advance the implementation of this policy when those agencies make administrative decisions pertinent to the use of water for human consumption, cooking, and sanitary purposes, according to a news release from the Environmental Justice Coalition for Water (ECJW). (http://www.ejcw.org)

“Safe, affordable water is a basic essential of survival,” said Alecia Sanchez of the California Center for Public Health Advocacy (CCPHA), a member of the Safe Water Alliance that has worked on this issue. “We applaud the Legislature and the Governor for recognizing this and taking the bold action to cement it into law."

For years, grassroots activists, community leaders, faith-based groups, and dedicated environmental justice, public health and environmental organizations, drawn together by a shared commitment to improve access to safe drinking water in our poorest communities, have been advocating at the local, regional, and state level, combating powerful, entrenched interests determined not to change the status quo in California water policy, according to Paola Ramos EJCW Interim Executive Director.

“It is disgraceful that there are communities in California that have struggled to gain access to safe water for decades," said Maria Herrera of the Community Water Center, a member of the Safe Water Alliance. "What our communities have lacked in influence, we make up in heart. Our impacted communities have been the lodestar of our work. Their voices have carried us all forward."

On August 29, legislators from regions all over the state—from Coachella Valley to San Diego, Fresno to the Central Coast, and San Gabriel to Marin County to Berkeley— stood up to support this bill and through their speeches echoed the voices of communities challenged to ensure safe water.

“Governor Brown also heard our community’s voices and now, with his signature of AB 685, state agencies making decisions that impact drinking water will have to consider our voices when setting policy, funding criteria, and regulation,” Herrera emphasized. “Today’s action will move not just these communities, but all of California, forward to the day where everyone can enjoy something as basic as safe drinking water. We are very grateful to Governor Brown for taking this historic step.”

Catarina de Albuquerque, The United Nations Special Rapporteur, welcomed the adoption of AB 685. She said the law “will be an inspiration not only for other states within the USA, but equally for many other countries in the world.” (http://www.ohchr.org/EN/NewsEvents/Pages/DisplayNews.aspx?NewsID=12605&LangID=E)

“When I received the good news about the adoption of this bill, my thoughts immediately went to those people I met last year in California who still do not benefit from this fundamental human right,” de Albuquerque said.

“I remember the tragic stories of farm-worker women in Seville, in the San Joaquin Valley, who were condemned to drinking the water from their polluted wells because they did not have the money to purchase bottled water. I recall the crying women who told me that they were devoting about 20 per cent of their US$14,000 per year income to water and sanitation. I am also thinking about the indigenous people of the Winnemem Wintu Tribe, whose lack of water and adequate sanitation was appalling," she stated.

Opponents focused on the requirement that water be “affordable.” For example, the Association of California Water Agencies (ACWA), questioned “to what extent water agencies would be forced to comply with the law.” Additionally, some opponents argued that by establishing a potentially enforceable human right to water, this bill has uncertain legal implications that may result in litigation, according to the Senate Analysis.

AB 685, the Human Right to Water Measure, was held in the Senate Appropriations Commiteee and never reached Brown's desk in the 2011 Legislative session, but passed through the Legislature this year.

While clean water advocates applaud Brown’s signing of AB 685 and the other bills, Brown has continued and expanded many of the other controversial environmental policies of the Schwarzenegger administration.

Brown has followed in Schwarzenegger’s foot steps by fast-tracking the plan to build a peripheral canal or tunnel, forging ahead with the privately funded Marine Life Protection Act (MLPA) Initiative that creates questionable “marine protected areas,” and presiding over record fish kills at the state and federal pumps in the 2011 water year.