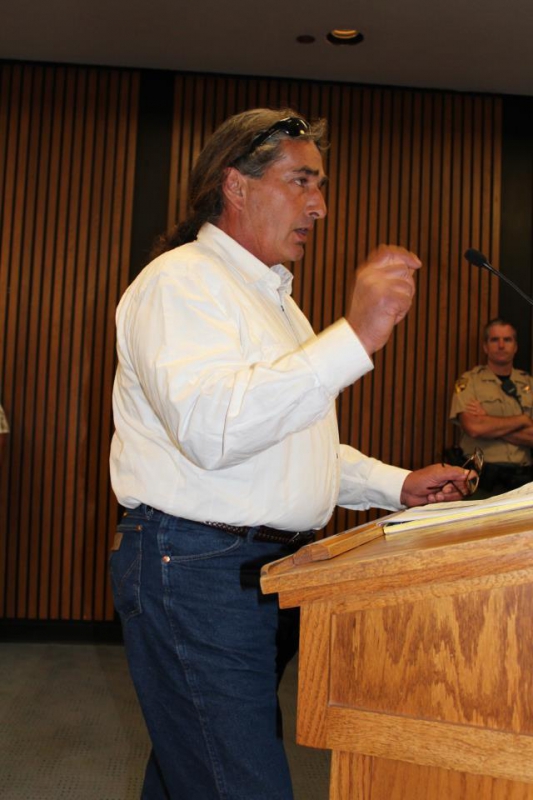 In fact, not one of the approximately 50 speakers, who lined up in the Resources Building to comment about the plan after the PG&E, NOAA, Department of Fish and Game and State Lands Commission representatives made their presentations, supported the plan, arguing that the high energy tests will harass, harm and kill whales, dolphins, salmon, rockfish and other marine life.

A large contingent of members of Greenpeace, along with Morro Bay area commercial fishermen, representatives of the Chumash Indian Tribe, Surfrider members, Zeke Grader, the executive director of the Pacific Federation of Fishermen’s Associations and many others, spoke out against the plan.

Commission President Jim Kellogg and Commissioner Michael Sutton, who have often disagreed on the Marine Life Protection Act (MLPA) Initiative and other issues, both completely agreed on the need to protect marine life from seismic testing in the Point Buchon State Marine Reserve and elsewhere on the Central Coast.

Kellogg stated, "I have been involved since the beginning of the MLPA process and I fought hard to get the best deal for the anglers... Now I will be the strongest advocate to keep protections in place. I've asked PG&E if it would would do a world wide search to for other technology to conduct these safety tests."

"I've seen nothing to convince me that the program is advisable or necessary," said Sutton, referring to the letter from NRDC and other NGOs arguing that the test was not necessary – and that more safe alternatives could be found. "I can't make a recommendation to the Department to issue a permit."

In the reversal of a previous position, Karen Garrison, a senior policy analyst with NRDC’s oceans program and co-director of its ocean program, told California Coastal Commission staff in a September 17 memo, “In summary, we have concluded that the survey will provide only marginal additional informational information that will not affect the safety of the Diablo plant. (http://www.rockofthecoast.com/2012/09/20/nrdc-calls-for-stop-to-pge-seismic-test-urges-coastal-commission-to-deny-permit)

The overwhelming opposition to the plan was evidenced by Commission Executive Director Sonke Mastrup, who said he was deluged with faxes opposing the testing until the machine broke and received 40,000 emails before the website shut down.

"In the end, the Commissioners filled the shoes of giants, directing their staff to attend the upcoming California Coastal Commission meeting on October 10th in Oceanside, and making sure everyone in the state knew they would not be tolerating any destructive activity in our Marine Protected Areas off the coast, such as the Point Buchon State Marine Reserve," said Joey Racano of the Ocean Outfall Group and the Stop Diablo Canyon Testing Facebook Community. (http://www.facebook.com/StopTheDiabloCanyonSeismicTesting?ref=ts)

No decision was made at the meeting, since it was a special workshop to gather information and discuss the status of PG&E’s proposed Central Coast seismic imaging project, PG&E’s application for a Scientific Collecting Permit and the California Department of Fish and Game’s draft parameters for that permit. Agency staff also discussed the Commission’s regulatory authorities, roles of other state and federal agencies and plans to minimize study impacts and lessons learned for future projects.

The Commission has regulatory authority to protect natural resources and oversee Marine Protected Areas, including those near Diablo Canyon, according to a DFG news release. However, the Fish and Game Commission does not have authority to manage whales, dolphins or sea otters. Marine mammals are protected under federal authorities.

Representatives of the Northern Chumash Tribal Council said they strongly opposed the seismic testing plan – and hadn’t been formally consulted by PGE, state and federal authorities about the project, as is required by state, federal and international laws.

“We have been here for 18,000 years and you we don't give you permission to take wildlife off our coast,” said Fred Collins, the Northern Chumash Tribal Council Administrator. (http://northernchumash.wordpress.com/2012/09/20/coastline-concerns/)

Collins drove the 12 hour round trip to speak, for only the 2 minutes allowed, to the Commission, asking them to not permit the seismic testing.

In a follow up statement, Collins said, “I find it very difficult to comprehend how under duress the animals, plants, trees and living things, which include us, how close to the edge of oblivion we have come. When it shows up on your door step it becomes a defiant wake up call. It's good to see everyone working together to prevent this from happening - this is what is necessary for our children’s children to have a future."

In a letter read to the Commission, Tribal Chair Antonette Cordero requested a meeting with Kellogg and Commission staff – and said she will also be contacting PG&E to schedule a meeting with their project staff.

“I have been informed by the States Land Commission that PG&E committed to reaching out to all Chumash tribal entities and other affected Native American groups after it was revealed that their initial outreach was inadequate,” said Cordero.” However, I, as tribal chair of the Coastal Bank of the Chumash Nation, have not been contacted.”

“Our right to defend our culture, our ancestors and our marine relatives is guaranteed under federal laws, such as the National Environmental Policy Act, the American Indian Religious Freedom Act and the Native American Graves Protection and Repatriation Act, under California laws, such as the California Environmental Quality Act and the Marine Life Protection Act, and under international accords, such as the United States Declaration on the Rights of Indigenous Peoples. Our obligation to steward these areas comes from the Creator and pre-dates state, federal or international laws,” said Cordero.

The Barbareno Chumash Council of Santa Barbara also opposed the testing in a statement.

“The territorial, cultural, and religious rights of the Chumash Nation are being challenged and undermined in insidious ways by Pacific Gas and Electric Company and the Diablo Nuclear Power Plant establishment. The Chumash Nation has an inherit right and International Right, to determine what is beneficial, safe and unendangered of our future generations of all life whom thrive on our lands and waters from Morro Bay to Santa Monica Bay. This Right and responsibility has been given to us by the creator since time immemorial,” the Council stated.

The big risk to whales and other marine life revealed!

The tremendous risk the seismic testing presents to whales, dolphins and other marine life is starkly revealed on page 121 of the "Central Coastal California Seismic Imaging Project Environmental Assessment" under Section 4.12.5, Potential Numbers of 'Takes by Harassment.' (http://www.indybay.org/newsitems/2012/09/17/18721842.php)

Assembly Bill 1632 (Blakeslee) 2006 required the California Energy Commission (CEC) to compile and assess potential vulnerabilities to a major disruption of the State’s two nuclear facilities due to aging or from a major seismic event.

In 2008, a previously undiscovered fault zone was found in the vicinity of the Diablo Canyon Nuclear Power Plant and the CEC issued a report concluding that three-dimensional geophysical seismic reflection mapping and other advanced techniques should be used to explore fault zones near Diablo Canyon. In 2009, the CEC and the California Public Utilities Commission directed PG&E to complete the three-dimensional geophysical studies recommended by the CEC.

The State Lands Commission (SLC), lead agency on the proposed project, certified the EIR for the project on Aug. 14 and on Aug. 20 SLC adopted the Mitigation Monitoring Program, Findings, and Statement of Overriding Considerations. Additionally, the California Coastal Commission (CCC) will consider PG&E’s application for a coastal development permit at their Oct. 10-12 meeting in Oceanside.

§protect our waters
by Adrian
Wednesday Sep 26th, 2012 12:15 AM
I will be at the Oceanside meeting. Great write-up. I heard about this a week ago from Greenpeace.
Add a Comment
§Testing can cause an earthquake
by just saying
Sunday Sep 30th, 2012 5:14 PM
This kind of testing can cause the very thing they are hoping will never happen. People testing for resource development, gas, oil, etc. have experienced tremors during and after testing. Fracking, drilling, sound waves all put pressure on the faults.

This is a dangerous practice and it not needed in this case. We already know the site is vulnerable. Why disturb it?
Add a Comment
Support Independent Media
We are 100% volunteer and depend on your participation to sustain our efforts!