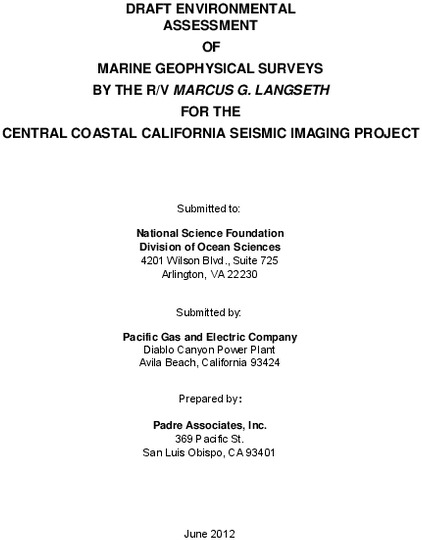 Responding to outrage and protests by fishermen, environmentalists and tribal members, the California Fish and Game Commission has scheduled a special meeting in Sacramento on Monday, September 24 to address the growing controversy surrounding Pacific Gas and Electric Company's plans to conduct high-energy seismic surveys in the ocean on the Central Coast off the Diablo Canyon Nuclear Power Plant.

The meeting will be held at 10 a.m. at the Resources Building, First Floor Auditorium, 1416 Ninth Street, Sacramento. The meeting may also be viewed live via the Internet at http://www.fgc.ca.gov.

After the public forum at the beginning of the meeting where any member of the public may address the Commission regarding the implementation of its policies or any other matter within the jurisdiction of the Commission, the Commission will receive and discuss information on PG&E's proposed Central Coast "Seismic Imaging Project."

The testing is expected to kill and harm blue whales, humpback whales, dolphins, fish and other marine life in a wide swatch of ocean, including the Point Buchon State Marine Reserve that went into effect under the Marine Life Protection Act (MLPA) Initiative in 2007.

According to a PG&E representative at an informational meeting, the proposal calls for a 240-foot ship to tow a quarter-mile wide array of twenty 250 decibel “air cannons,” along a 90-mile stretch of California’s Central Coast. The cannons will shoot deafening underwater explosions once every twenty seconds, day and night, for 42 days and nights. The region of California’s Center where this devastating assault on wildlife is expected to take place includes the “protected” Point Buchon State Marine Reserve.

In spite of this big risk, the Pacific Gas and Electric (PG&E) company has been given the green light by various agencies in Sacramento to survey the spiderweb of earthquake faults surrounding their controversial nuclear facility. However, the Fish and Game Commission still has not granted its final approval, according to David Gurney, Vice Chair of the Ocean Protection Coalition of Mendocino County and independent journalist (http://noyonews.net).

Gurney stated, "In early June of this year, members of the F&G Commission found themselves in the embarrassing position of congratulating themselves on final approval of controversial 'marine protection areas' on the North Coast, just as they were being asked by PG&E to 'cleanse' the Point Bushon 'State Marine Reserve' and 'State Marine Conservation Areas' on the Central Coast." (http://noyonews.net/?p=6344)

"Activists on California's North Coast were deliberately silenced by a corrupt MLPA 'Initiative’ when they asked for protections against seismic testing, navy sonar, oil drilling and infrastructure, wave energy, and other threats to MPAs, as intended by the 1999 Marine Life Protection Act. The so-called MLPA 'Initiative' was headed up by Big Oil, Big Energy, and Big Agriculture appointees, and informed by 'scientists' with gross conflict of interest," noted Gurney.

Gurney emphasized, "Each of these underwater blasts will be at the volume level of a shock wave, that will instantly deafen, maim and possibly kill everything unfortunate enough to be in its path. A 240 dB blast is reportedly like being one foot away from the mouth of a large cannon. For a human, your ears, or what’s left of your ears, would probably never stop ringing. The consequences of experiencing this level of sound can only be presumed to be immediate and permanent deafness – if not worse. For sea life, beyond just broken eardrums, the transfer of low-frequency shock waves from water-air-water causes hemorrhaging of lungs and air-sacks, and will result in the death of marine mammals – whales, dolphins, seals, sea lions and otters – and fish."

Even worse, at a recent Coastal Commission meeting in Caspar, California, Deputy Director Alison Dettmer announced that seismic testing plans for the controversial Diablo Canyon nuclear power plant are not the only high-energy surveys proposed for studying potential earthquakes off the state’s two active nuclear facilities - they are also planned off the San Onofre Nuclear Generating Station!

The resistance to seismic testing by a diverse coalition of fishermen, environmentalists and tribal members is mushrooming. The Stop the Diablo Canyon Seismic Testing facebook page (http://www.facebook.com/StopTheDiabloCanyonSeismicTesting?ref=ts), set up by Joey Racano of the Ocean Outfall Group, is growing quickly, reflecting the growing concern of the public about the terrible idea of seismic blasting on the Central Coast of California.

The group held a "Thank the Whales" protest on September 1, drawing over 400 people to Port San Luis and Avila Beach to thank the whales for converging in large numbers on the Central Coast, apparently to alert people of the dangers of seismic testing. "With this event, the corporate media black out ended," said Racano.

On September 20, the Northern Chumash Tribal Council (NCTC) released a statement strongly opposing the seismic testing: "NCTC advocates that the seismic testing be stopped to allow time to thoroughly explore other technologies not harmful to marine life. There is no data collection for science that is worth the possible destruction of the warp and weave of the basket of life." (http://northernchumash.wordpress.com/2012/09/20/coastline-concerns/)

In other breaking news, the Natural Resources Defense Council (NRDC), under pressure from grassroots environmental activists, has withdrawn its support of PG&E's plan to conduct seismic testing in the ocean off Diablo Canyon.

In a September 17 memo, Karen Garrison, a senior policy analyst with NRDC’s oceans program and co-director of its ocean program, told California Coastal Commission staff, “In summary, we have concluded that the survey will provide only marginal additional informational information that will not affect the safety of the Diablo plant.”

Greenpeace, the Sea Shepherd, the Surfrider Foundation and many other environmental organizations have posted action alerts, petitions, articles and updates about the campaign to stop seismic testing on their websites and facebook pages.

George Osborn, representing the California Association for Recreational Fishing, American Sportfishing Association and the Coastside Fishing Club, also slammed PG&E's plan to conduct seismic testing off Diablo Canyon in his testimony in the August Fish and Game Commission meeting. To see a video of his comments, go to: http://www.savecalfishing.org/blog/2156/CARF-Voices-Concerns-about-PGEs-Seismic-Testing-at-Diablo-Canyon

Racano, Gurney and many others will attending the Fish & Game Commission meeting in Sacramento on September 24 to urge them to halt the PG&E seismic testing plan. You can say ‘no’ to seismic testing with air cannons by sending your e mail to: fgc [at] fgc.ca.gov. Put "attention: Sonke Mastrup."

Please keep writing letters to the newspapers!
letters [at] thetribunenews.com, letters [at] newtimesslo.com, neil [at] tolosapress.com

Please email the Fish and Game Commission with your concerns about the deadly seismic testing at:
fgc [at] fgc.ca.govattn: Sonke Mastrup

For details and an agenda of the upcoming Fish and Game Commission meeting, go to: http://www.fgc.ca.gov/meetings/2012/092412agd.pdf
Add Your Comments
LATEST COMMENTS ABOUT THIS ARTICLE
Listed below are the latest comments about this post.
These comments are submitted anonymously by website visitors.