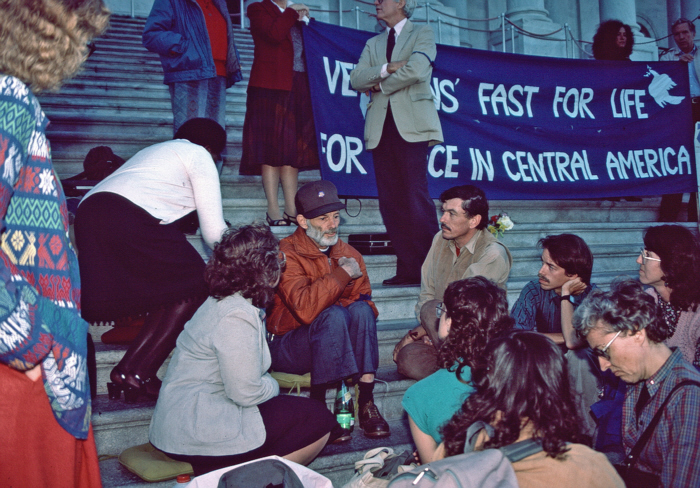 Duncan was on the tracks and narrowly escaped when Brian Willson was run over as they blocked munitions trains with weapons going to Central America 25 years ago. That action led to the 2 year+ occupation of the tracks.

It will be at the SF Veterans Building, 401 Van Ness (@ McAllister), Room 219. It will be a potluck, but come—with or without food—to talk about our friend Duncan, or learn about him.

Brian Willson, who knew Duncan since Brian was nine, will also be there.

On September 5th, 10,000 people gathered at Concord. They were there because they were outraged by the attack on Brian—and -the ongoing attack on the people of Central America. And so they gathered—Jesse Jackson, Joan Baez, Daniel Ellsberq, Alice Walker, and Miriam Linder, the mother of Ben Linder, another U.S. citizen who risked—and lost—his life for peace in Central America during a contra attack in Nicaragua.. Religious, political, and labor leaders came, as did thousands of people who have never been to a demonstration before. And there we all were, standing by the tracks that led to 262 bunkers full of war material. We came together to oppose a war that is extremely destructive and that threatens to escalate.

In the summer of 1987, a small group of peace activists and veterans who had completed a fast at the nation’s capital the previous fall, formed Nuremberg Actions. They began a vigil outside of the Concord Naval Weapons Station announcing their intent to begin blocking weapons trucks and trains on September 1st in a nonviolent protest against weapons shipments to Central America. On that day, after clergy formally notified the base that Americans would be sitting on the tracks in a non-violent blockade, Vietnam veteran S. Brian Willson was run down and nearly killed by a US Navy Munitions train. The others suffered various injuries, but Brian lost both of his legs.

A court order upheld Nuremberg Actions' right to maintain a 24 hour vigil at the site where Brian was attacked. For three years the community maintained the site and blocked every weapons train and truck as they moved towards ships to be loaded for Central America. The intentional community of 20 to 30 people hosted over a thousand Northern California activists who joined in the protest weekly or monthly, and an estimated 100,000 visitors from every corner of the nation, and from around the world in those three years. The Nuremberg community will return to remember that fateful day, honor heroes who have passed, and recommit to peace and social justice.


Added to the calendar on Sat, Sep 1, 2012 11:35PM
Add Your Comments
Support Independent Media
We are 100% volunteer and depend on your participation to sustain our efforts!