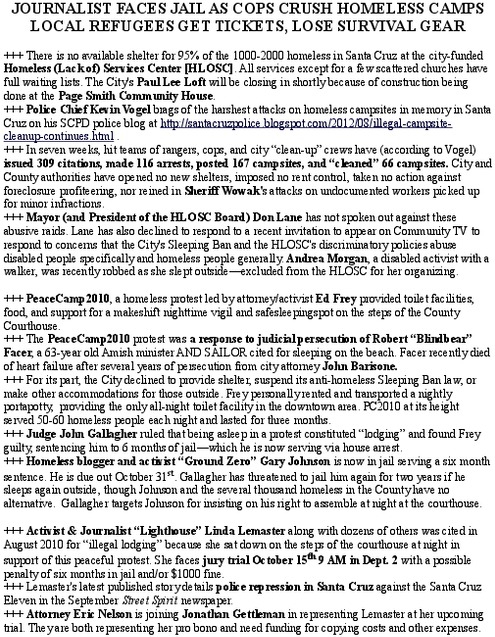 +++ There is no available shelter for 95% of the 1000-2000 homeless in Santa Cruz at the city-funded Homeless (Lack of) Services Center [HLOSC]. All services except for a few scattered churches have full waiting lists. The City's Paul Lee Loft will be closing in shortly because of construction being done at the Page Smith Community House.
+++ Police Chief Kevin Vogel brags of the harshest attacks on homeless campsites in memory in Santa Cruz on his SCPD police blog at http://santacruzpolice.blogspot.com/2012/08/illegal-campsite-cleanup-continues.html .
+++ In seven weeks, hit teams of rangers, cops, and city “clean-up” crews have (according to Vogel) issued 309 citations, made 116 arrests, posted 167 campsites, and “cleaned” 66 campsites. City and County authorities have opened no new shelters, imposed no rent control, taken no action against foreclosure profiteering, nor reined in Sheriff Wowak's attacks on undocumented workers picked up for minor infractions.
+++ Mayor (and President of the HLOSC Board) Don Lane has not spoken out against these abusive raids. Lane has also declined to respond to a recent invitation to appear on Community TV to respond to concerns that the City's Sleeping Ban and the HLOSC's discriminatory policies abuse disabled people specifically and homeless people generally. Andrea Morgan, a disabled activist with a walker, was recently robbed as she slept outside—excluded from the HLOSC for her organizing.

+++ PeaceCamp2010, a homeless protest led by attorney/activist Ed Frey provided toilet facilities, food, and support for a makeshift nighttime vigil and safesleepingspot on the steps of the County Courthouse.
+++ The PeaceCamp2010 protest was a response to judicial persecution of Robert “Blindbear” Facer, a 63-year old Amish minister AND SAILOR cited for sleeping on the beach. Facer recently died of heart failure after several years of persecution from city attorney John Barisone.
+++ For its part, the City declined to provide shelter, suspend its anti-homeless Sleeping Ban law, or make other accommodations for those outside. Frey personally rented and transported a nightly portapotty,  providing the only all-night toilet facility in the downtown area. PC2010 at its height served 50-60 homeless people each night and lasted for three months.
+++ Judge John Gallagher ruled that being asleep in a protest constituted “lodging” and found Frey guilty, sentencing him to 6 months of jail—which he is now serving via house arrest.
+++ Homeless blogger and activist “Ground Zero” Gary Johnson is now in jail serving a six month sentence. He is due out October 31st. Gallagher has threatened to jail him again for two years if he sleeps again outside, though Johnson and the several thousand homeless in the County have no alternative. Gallagher targets Johnson for insisting on his right to assemble at night at the courthouse.

+++ Activist & Journalist “Lighthouse” Linda Lemaster along with dozens of others was cited in August 2010 for “illegal lodging” because she sat down on the steps of the courthouse at night in support of this peaceful protest. She faces jury trial October 15th 9 AM in Dept. 2 with a possible penalty of six months in jail and/or $1000 fine.
+++ Lemaster's latest published story details police repression in Santa Cruz against the Santa Cruz Eleven in the September Street Spirit newspaper.
+++ Attorney Eric Nelson is joining Jonathan Gettleman in representing Lemaster at her upcoming trial. They are both representing her pro bono and need funding for copying costs and other expenses.

+++ Santa Cruz--unlike San Diego and Los Angeles--has a Sleeping and Blanket Ban which criminalizes homeless people at night for survival camping. Fines for violating MC 6.36.010 range from $100 to $200. When sent to collection, additional fines and penalties are added. Since homeless people have to sleep every night and have no legal shelter, many disregard these tickets.
+++ The HLOSC refuses to give out letters to court acknowledging their Paul Lee loft shelter is full. (It also has a 2-6 week waiting list.). Repeated appeals to HLOSC Executive Director Monica Martinez and Mayor Lane have had no impact.
+++ A Lane City Council law makes ignoring 3 citations a separate misdemeanor-- punishable by up to 6 months in jail and $1000 fine. A second law makes every subsequent infraction of any kind an automatic misdemeanor. Authorities have recently declared they are stepping up enforcement of these anti-homeless ordinances.
+++ Vogel's SCPD published a snitch hotline number ramping out and facilitating the class hatred of well-to-do property owners and business people who now have police sanction to criminalize the unsightly. Regular patrols led by anti-homeless diehards like Officers Winston and Warren have escalated attacks on the poor for sitting near a building, holding up a “for change” sign after dark,etc.
+++ Pressured by the PC2010 protests, City Council rubberstamped City Attorney Barisone's ordinance which purports to immunize homeless people from citations if they have signed up for the HLOSC waiting list (MC 6.36.055). It is unclear whether this ordinance is being fairly and fully enforced, but the HLOSC's Martinez refuses to give out receipts indicating folks are on the waiting list and so eligible for the immunity. It also seems to be an unconstitutional grant-magnet which requires homeless people to join a private organization in order to be protected from Sleeping Ban prosecution. Regardless of the law, camping tickets have increased massively over the summer.
+++ Police, rangers, public works “clean up” crews, and Labor-ready hires are destroying campsites and homeless property in violation of state law & the Kinkaid court decision out of Fresno that gave the homeless community there $2.3 million.  This week another Federal Court ruled that homeless have the right to reclaim property designated as “garbage” taken in sweeps . Watch out, Santa Cruz !
+++ As with the Santa Cruz Eleven (charged with fabricated felonies and misdemeanors for a peaceful vacant bank occupation last winter), Frey, Johnson, and Lemaster are being targeted for their political activities not for actual crime. Homeless sleeping & protesting the ban are now crimes.

** Support Lemaster at homes4everyone [at] yahoo.com or send what you can to L.L. P.O. Box 42, Davenport, CA 95017 to defray the costs of her legal defense.
** Schedule Time to Attend Protests & Organize Resistance
** Document and Post any Abuses You Observe. Stand Up for Those Under Attack.
** Phone in reports to Free Radio Santa Cruz at 831-427-3772 or HUFF at 423-4833.
** Act to Restore Regular Use of Public Spaces Arbitrarily Closed to Repress Protest.
** Post Written & Video Reports on Facebook, http://www.indybay.org/santacruz etc.
** Refuse to Cooperate with the Campaign to Scapegoat and Sweep Away the Poor.
** Resist the Campaign of Fear & Renew Protests Against Illegitimate Authority
** Support the Santa Cruz Eleven at http://www.santacruzeleven.org
COMING UP: Afternoon Tuesday Sept. 11th : Drop in on the Bureaucrats at Work and then Speak Out at City Council to the Community

Flier by Norse of HUFF (Homeless United for Friendship & Freedom) 831-423-4833 http://www.huffsantacruz.org 309 Cedar PMB #14B S.C. 9-7-12
Add Your Comments
LATEST COMMENTS ABOUT THIS ARTICLE
Listed below are the latest comments about this post.
These comments are submitted anonymously by website visitors.