Add an Event
Newswire
Calendar
Features
Home
Donate
From the Open-Publishing Calendar
From the Open-Publishing Newswire
Indybay Feature
Publish to Newswire
Add an Event
Related Categories: International | Anti-War
Beirut Patriarch: EU Doesn't Care About the Fate of Christians in the Middle East
by Jurgen Liminski
Monday Aug 27th, 2012 2:12 PM
Equality before the law does not exist. 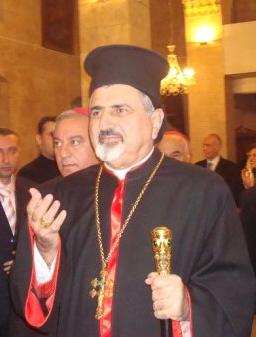 The West's attitude to the Syrian conflict was described as "hypocrisy" and sharply criticised by the Patriarch of the Syriac Catholic Church in Beirut, Ignatius Ephrem Joseph III. "For many governments it's merely a matter of economic interests. They don't really care about the fate of the Christians in the Middle East. Otherwise they would advocate equality before the law and the observance of human rights for all, including in those countries where the so-called Arab Spring has not taken place", the Beirut Patriarch claims in an interview with the international Catholic charity "Aid to the Church in Need". It's primarily a matter of safeguarding freedom of conscience and religion for all. But this equality before the law does not exist. "It is this that seriously threatens our survival throughout the region", the head of the Syriac Catholic Church stressed.

Below we publish the interview with His Beatitude Ignatius Ephrem Joseph III., Patriarch of the Syriac Catholic Church in the Middle East and one of the seven Patriarchs in this region.

Q: Your Beatitude, we hear a lot about the situation of the Christian refugees and the tensions in Lebanon. That's one side of the picture. The other is the political aspect of the Christian presence in Lebanon and in the Middle East. Is this presence at risk?

A: Patriarch Ignatius Ephrem Joseph III.: "The situation of the Christians in Lebanon differs fundamentally from that of the Christians in the other countries of the Middle East. The constitution recognizes 18 official religious communities, eleven of which are Christian. But the main concern everywhere is that of human rights. There's no lack of money and also no lack of vocations. We are being put under pressure by those who wish to recognize only one single religion. We Christians do not demand any special rights; we only want the same rights as everybody else. We want freedom of conscience, we want freedom of religious worship, and we also want freedom for those who don't believe anything. This equality before the law does not exist. It is this that seriously threatens our survival throughout the region."

Q: If only it were merely a matter of legal questions, that would be tolerable. But what is the practical situation?

A: Patriarch Ignatius Ephrem Joseph III.: "No. The legal questions determine our practical life. They are the framework for human dignity. Our young people don't want to beg for the right to work and live in their own country. In Iraq they ask me: What should we do? Where are we still safe? And it terms of practical living it's like this: When a young man, a Christian, falls in love with a Muslim woman and she loves him, he has to become a Muslim in order to marry her. Where is the freedom of faith there? Another example: We now have a family from Iran here and they want to be baptised. But in doing this they are risking their lives. Where is the freedom of religion there? Islam does not tolerate a change of faith. There is a similar situation in Turkey. There you can see what follows when freedom only exists on paper. The goods of Christians have been confiscated and many churches have been destroyed. But the Christians were in Asia Minor before the Muslims. Rights are also officially recognised in Iraq, but nobody protects them, nobody does anything against the persecution of Christians. And now Syria. Our presence is also under threat there."

Q: Are you on Assad's side?

A: Patriarch Ignatius Ephrem Joseph III.: "We're on nobody's side. I repeat: We only want the same rights as everybody else. If anything, we're on the side of the Syrian people. But if one doesn't speak out against Assad nowadays it's taken to mean that one's on his side. Do you know who they all are on the other side and whether these forces will recognise civil rights and the Charter of the United Nations?"

Q: Is the European Union wrong in supporting the rebels?

A: Patriarch Ignatius Ephrem Joseph III.: "Permit me to speak quite frankly. There's a lot of hypocrisy in all this. For many governments it's merely a matter of economic interests. They don't really care about the fate of the Christians in the Middle East. Otherwise they would advocate equality before the law and the observance of human rights for all, including in those countries where the so-called Arab Spring has not taken place. More than a year ago we said that the Arab Spring would result in chaos and civil war. This is not a matter of taking sides for or against Assad or some other potentate in the region. It's a matter of equal rights for all. It's a matter of the primacy of human rights and not the primacy of one religion. Integration and living side-by-side are only possible if this primacy is respected. I said it to the government in Paris and I'll say it to you: Fundamental Islam does not want a dialogue on equal terms in the long run. If the EU were serious about its human rights principles they would openly take up the cause of the future of younger generations in the region. Let's put it like this: there's a lot of economic opportunism around."

Q: Is it any different in the Middle East?

A: Patriarch Ignatius Ephrem Joseph III.: "No. The refugees who are turning up now are telling us: We trust only the Church. They come mainly from the large towns, Aleppo, Homs and Damascus. That's where they are in danger. Most of them want to move on to America, Greece, Australia or Europe. Especially the middle class who still have some reserves. They're looking for countries where they are equal before the law."

By Jurgen Liminski, Aide to the Church

http://www.aina.org/news/20120826223718.htm
Add Your Comments
Support Independent Media
We are 100% volunteer and depend on your participation to sustain our efforts!