Add an Event
Newswire
Calendar
Features
Home
Donate
From the Open-Publishing Calendar
From the Open-Publishing Newswire
Indybay Feature
Publish to Newswire
Add an Event
Related Categories: California | International | U.S. | Environment & Forest Defense | Government & Elections | Health, Housing & Public Services
Utilities’ nuclear power plants threaten millions
by Ed Oberweiser
Saturday Aug 25th, 2012 12:18 AM
It’s painfully obvious that nuclear power is harmful and dangerous. France has had 12 nuclear accidents between 1969 and 2012. Japan has had 12 since 1978. There were 46 nuclear accidents in the United States between 1955 and 2011.

Photo: The Diablo Nuclear Power Plant, just 600 yards east of the Shoreline Fault, and less than two and a half miles from the Hosgri Fault. 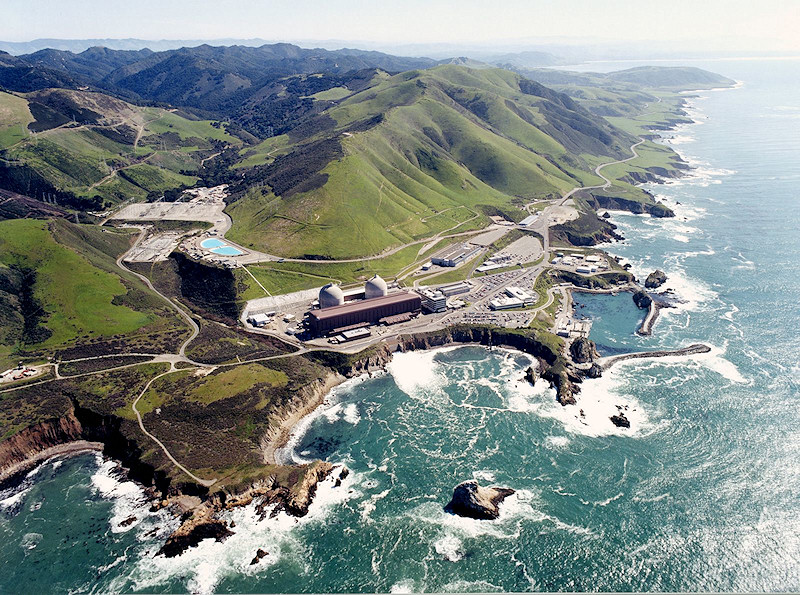 Pacific Gas and Electric Company (PG&E) and Southern California Edison (SCE) have placed millions of California citizens in danger of a nuclear catastrophe on a par with Fukushima.

They’ve built nuclear power plants near earthquake faults capable of generating earthquakes that could damage the plants and irradiate millions of people.

PG&E constructed the Diablo Canyon Power Plant on the Central California coast near San Luis Obispo and Morro Bay. The plant is 2.5 miles from the Hosgri Fault. The Hosgri Fault is a component of the San Andreas Fault system. It’s considered capable of generating a 7.5 magnitude earthquake.

AB1632 Assessment of California’s Operating Nuclear Plants is a 2008 California Energy Commission (CEC) study. According to the study (http://www.energy.ca.gov/2008publications/CEC-100-2008-005/CEC-100-2008-005-F.PDF), “The deep geometry of faults that bound the San Luis-Pismo block, where Diablo Canyon sits, is not understood sufficiently to rule out a San Simeon-type earthquake directly beneath the plant.”

That same year, the Shoreline Fault was discovered. It’s a 25 kilometer-long fault that lies less than a mile from Diablo Canyon. Some government scientists believe there’s a possibility that faults acting with others in the region could produce a stronger earthquake than Diablo Canyon was constructed to withstand.

During a Spring, 2012 US Geological Survey (USGS) presentation in Menlo Park, one scientist laid out a scenario showing the Hosgri Fault reaching 250 miles from Point Conception to Bolinas. He said if it was that long, it could generate nearly an 8.0 magnitude earthquake. The USGS scientists won’t directly say if the Hosgri fault is that long because it’s officially listed as being only 105 miles long. The USGS is still collecting data through the California Sea Floor Mapping Program.

The San Onofre nuclear power plant has had problems from its beginning. Its first reactor, Unit One, began operating in 1968 but developed problems and was shut down in 1992. Units 2 and 3 began operations in 1983 and 1984. Both the Unit 2 and Unit 3 reactors have been shut down since January 2012 due to premature wear found on tubes in their steam generators. The steam generators were installed two years ago in Unit 2 and one year ago in Unit 3. Plant officials pledged not to restart San Onofre until the cause of the tube leaks and degradation is understood. The units are expected to be offline during the summer.

There are major uncertainties regarding the seismology of the San Onofre site. They relate to the continuity, structure and earthquake potential of the South Coast Offshore Fault Zone. The uncertainties concern the faulting that connects the Newport-Inglewood Fault in the Los Angeles region with the Rose Canyon Fault in the San Diego region.

Instead of working toward converting to renewable energy production and energy conservation technology, PG&E is stubbornly holding on to nuclear power until the bitter end. It will spend millions on a seismic survey of the faults around Diablo Canyon using acoustic pulse-generating active air guns. These 40 to 360 cubic inch air guns would fire every fifteen seconds, twenty-four hours a day.

The Environmental Impact Report indicates the tests would kill and injure marine mammals, including seals, whales, dolphins and otters. In Peru a mass die off of marine mammals occurred during the same time frame that seismic testing was being done off Peru’s coast. Nearly 900 porpoises and dolphins died there.

According to The Associated Press, the nuclear industry had created 71,862 tons of highly radioactive nuclear waste in the United States by 2011. The US still hasn’t created a safe place to permanently store the material for the necessary tens of thousands of years.

If all this wasn’t bad enough, numerous nuclear accidents have already happened. The Enrico Fermi reactor on the shore of Lake Erie had a partial fuel meltdown in 1966. At the Three Mile Island nuclear plant in Pennsylvania, the number two reactor had a partial core meltdown in 1979. The plant released 40,000 gallons of radioactive wastewater directly into the Susquehanna River.

At the Chernobyl Nuclear Power Plant in Russia, a reactor exploded. A fire burned for nine days. It released 100 times more radiation into the atmosphere than the atom bombs dropped on Hiroshima and Nagasaki. The radiation spread not only to western Russia but also into Europe. Russian scientists said 28,000 square kilometers were contaminated. Approximately 116,000 citizens were evacuated and 830,000 people were contaminated with Cesium 137. The incidence of thyroid cancer among children in Belarus, Ukraine and Russia has risen sharply since the Chernobyl disaster.

Finally, the world has been subjected to the nuclear disaster at Fukushima, Japan where three reactors have melted down. Japanese officials initially assessed the accident as Level 4 on the International Nuclear Event Scale (INES) despite the views of other international agencies that it should be higher. The level was successively raised to 5 and eventually to 7, the maximum scale value.

Greedy, uncaring corporations like Pacific Gas and Electric Company and Southern California Edison have put profit above the safety of the biosphere and humanity.
Add Your Comments
LATEST COMMENTS ABOUT THIS ARTICLE
Listed below are the latest comments about this post.
These comments are submitted anonymously by website visitors.