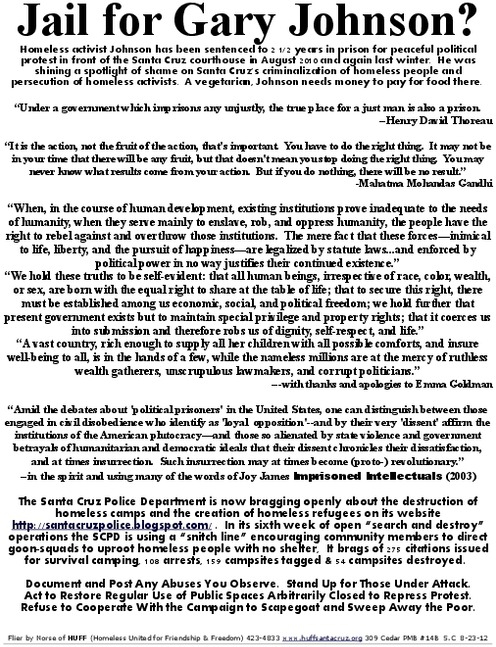 Homeless activist Johnson has been sentenced to 2 1/2 years in prison for peaceful political protest in front of the Santa Cruz courthouse in August 2010 and again last winter. He was shining a spotlight of shame on Santa Cruz's criminalization of homeless people and persecution of homeless activists. A vegetarian, Johnson needs money to pay for food there.

“Under a government which imprisons any unjustly, the true place for a just man is also a prison.
--Henry David Thoreau

“When, in the course of human development, existing institutions prove inadequate to the needs of humanity, when they serve mainly to enslave, rob, and oppress humanity, the people have the right to rebel against and overthrow those institutions. The mere fact that these forces—inimical to life, liberty, and the pursuit of happiness—are legalized by statute laws...and enforced by political power in no way justifies their continued existence.”
“We hold these truths to be self-evident: that all human beings, irrespective of race, color, wealth, or sex, are born with the equal right to share at the table of life; that to secure this right, there must be established among us economic, social, and political freedom; we hold further that present government exists but to maintain special privilege and property rights; that it coerces us into submission and therefore robs us of dignity, self-respect, and life.”
“A vast country, rich enough to supply all her children with all possible comforts, and insure well-being to all, is in the hands of a few, while the nameless millions are at the mercy of ruthless wealth gatherers, unscrupulous lawmakers, and corrupt politicians.”
---with thanks and apologies to Emma Goldman

“Amid the debates about 'political prisoners' in the United States, one can distinguish between those engaged in civil disobedience who identify as 'loyal opposition'--and by their very 'dissent' affirm the institutions of the American plutocracy—and those so alienated by state violence and government betrayals of humanitarian and democratic ideals that their dissent chronicles their dissatisfaction, and at times insurrection. Such insurrection may at times become (proto-) revolutionary.”
--in the spirit and using many of the words of Joy James Imprisoned Intellectuals (2003)

The Santa Cruz Police Department is now bragging openly about the destruction of homeless camps and the creation of homeless refugees on its website http://santacruzpolice.blogspot.com/ . In its sixth week of open “search and destroy” operations the SCPD is using a “snitch line” encouraging community members to direct goon-squads to uproot homeless people with no shelter, It brags of 275 citations issued for survival camping, 108 arrests, 159 campsites tagged & 54 campsites destroyed.

Document and Post Any Abuses You Observe. Stand Up for Those Under Attack.
Act to Restore Regular Use of Public Spaces Arbitrarily Closed to Repress Protest.
Refuse to Cooperate With the Campaign to Scapegoat and Sweep Away the Poor.


Flier by Norse of HUFF (Homeless United for Friendship & Freedom) 423-4833 http://www.huffsantacruz.org 309 Cedar PMB #14B S.C 8-23-12
§Vigil for Gary Johnson at 1 PM Today
by Sleepless Friday Aug 24th, 2012 12:21 PM
Folks plan to gather at the Occudome Plaza aka Water Street Courthouse steps, from 1-3 today to continue the protest of anti-sleeping and anti-"lodging" laws as enforced in Santa Cruz and California.

I plan to nap in solidarity with Gary (I have a place to stay inside, so I'm not at risk of arrest for "lodging" at the Courthouse). Be careful out there, brothers and sisters. Good luck to you, G.
§Gary is to turn himself in to serve his jail sentence at 3 PM today
by Sleepless... Still Friday Aug 24th, 2012 12:26 PM
Folks may choose to accompany him across the street to jail at that time.
§Judge orders Gary J. to Jail. Jail refuses to accept him. Gary J. arrested at Courthouse.
by Brent Adams Friday Aug 24th, 2012 4:12 PM
With Sleep Crime Activist Lawyer Ed Frey by his side, Gary Johnson is ordered by judge gallagher to jail at 3pm today.
While video taping Gary Johnson, Ed Frey and others in the hallway a deputy forced me (Brent Adams) to leave the courthouse with my camera insisting that I didn't have permission to videotape; while many other video cameras were rolling and exposed. I was threatened to have my camera taken.

The county jail refused to accept Gary, ordering him to return Monday 8am.
Gary was frustrated with this and returned to the Courthouse. I asked the deputy at the entrance for permission to follow Gary in with my camera and it was granted.

Gary Johnson was immediately arrested by a sheriff's deputy who shouted that my camera be confiscated.
I explained that I'd received permission at the entrance. The deputy rushed to me as I quickly back-stepped to the doorway.
I was allowed to exit with my camera.

The last visual report of Gary Johnson is that he was seen being handcuffed and led down the hallway.
It is unclear why he was being detained.

I left the building under threat of having my camera taken.

§Principled Activist, Courageous Photographer, Camera-Censoring Constable
by Robert Norse Friday Aug 24th, 2012 9:19 PM
I'm still unaware of any rules prohibiting videoing or audioing in the corridors of the courthouse. That sounds concocted. Ed Frey was going to investigate that when some deputy tried to shut down audio recording 2 years ago, but the issue subsided.

A special salute to Brent Adams, whose documentation of these abuses, is done under threat of jailing--particularly since he faces false charges in the Santa Cruz Eleven case, which will be hanging over his head until January.

I'm hoping to see the video, and also salute Brent for posting the first full story on the Police "Snitch, Search, and Destroy" operations against homeless survival encampments at http://www.indybay.org/newsitems/2012/08/23/18720177.php . I've added Don Lane's e-mail to me, and my response to him today, for those who want to keep updated.

Gary is a courageous guy, but what the people being persecuted that his case points to---both political activists and homeless people trying to sleep at night--is even more important.

Gary called me from jail a few hours ago from the holding cell. He noted that the jail hadn't known how much time to give him--but ended up--at his suggestion--giving him an out date of Saturday, November 17th. He seemed in his usual good spirits when he spoke with me.

To be able to receive collect calls from Gary, you need to get on a special account which I tried unsuccessfully to do earlier this year when Gary was in jail before. If anyone succeeds, let me know.
§Gary Johnson Denied Entrance to Santa Cruz County Jail
by Bradley Stuart Allen (bradley [at] riseup.net) Sunday Sep 2nd, 2012 12:12 AM 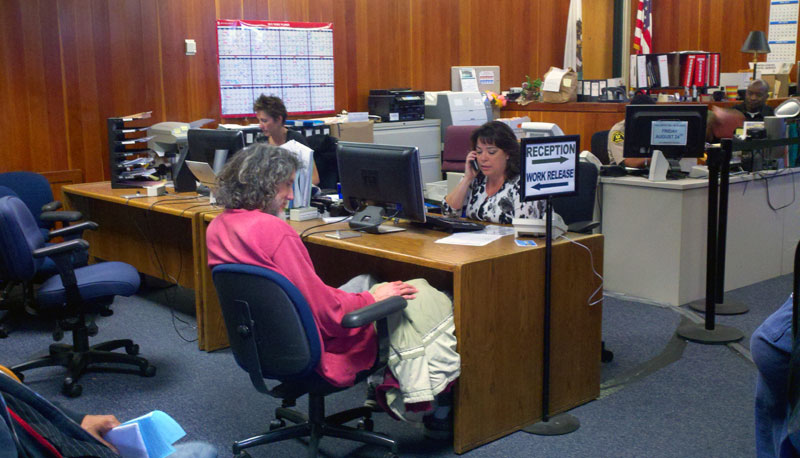 On August 24th, Gary Johnson was ordered by Judge Gallagher to report to the Santa Cruz County Jail at 3 p.m. The jail refused to accept Johnson, and ordered him to return on Monday at 8 a.m.

Without having a legal place to sleep, Johnson was frustrated and returned to the Santa Cruz Courthouse. Upon entering the courthouse, he was quickly arrested by a sheriff's deputy.
http://bradleystuart.net/
§Gary Johnson and Supporters at the Santa Cruz County Jail
by Bradley Stuart Allen Sunday Sep 2nd, 2012 12:15 AM 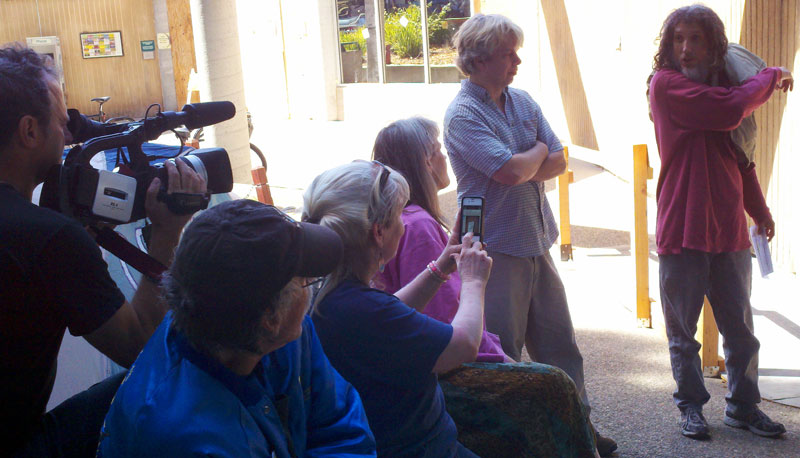 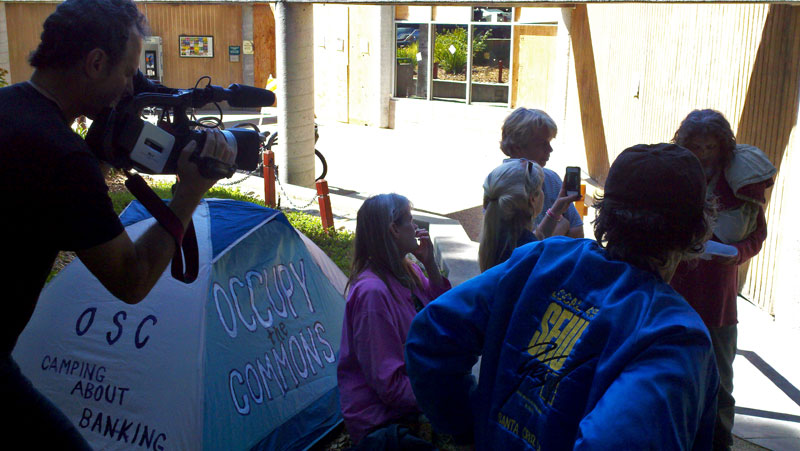 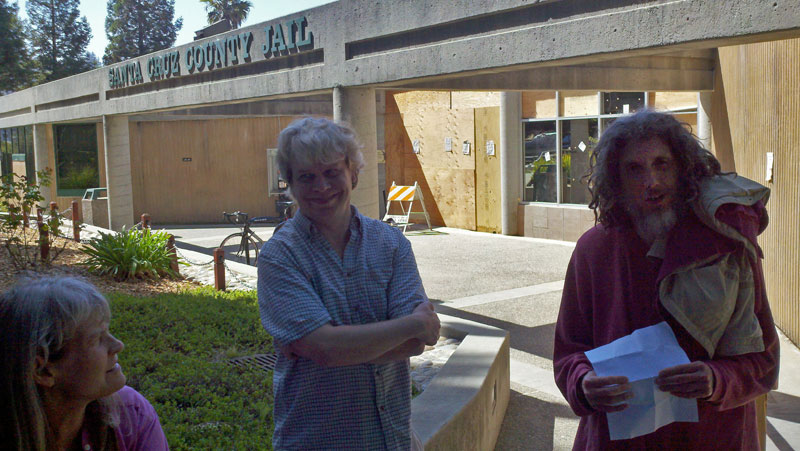 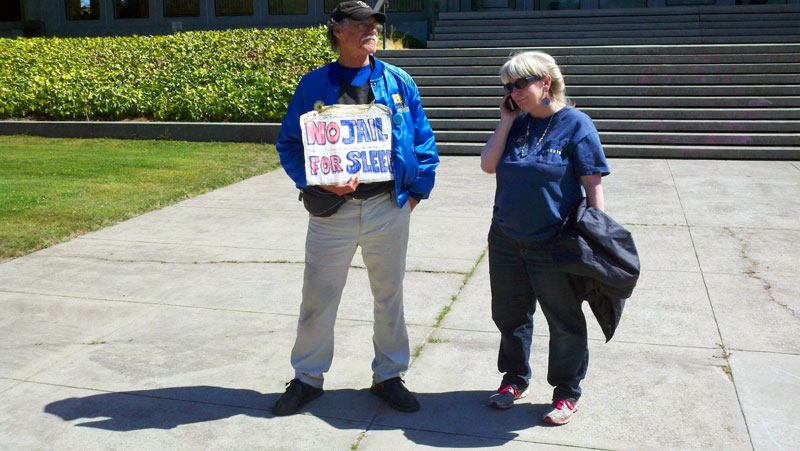