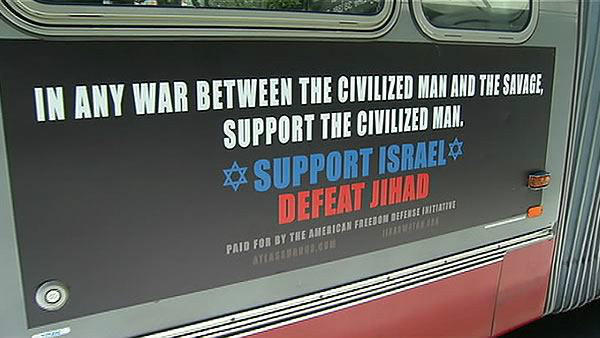 A week ago, the well-known hate group, "The American Freedom Defense Initiative (AFDI)" led by Pamela Geller, posted the Islamophobic ad pictured here on San Francisco buses. After MUNI announced that it would not remove the ads, despite community pressure, someone took matters into their own hands and modified one of the ads as shown here. Bravo to the artists, whoever you are! And we hope for many more such grassroots efforts.
§Revised
by Anonymous Friday Aug 17th, 2012 11:26 AM 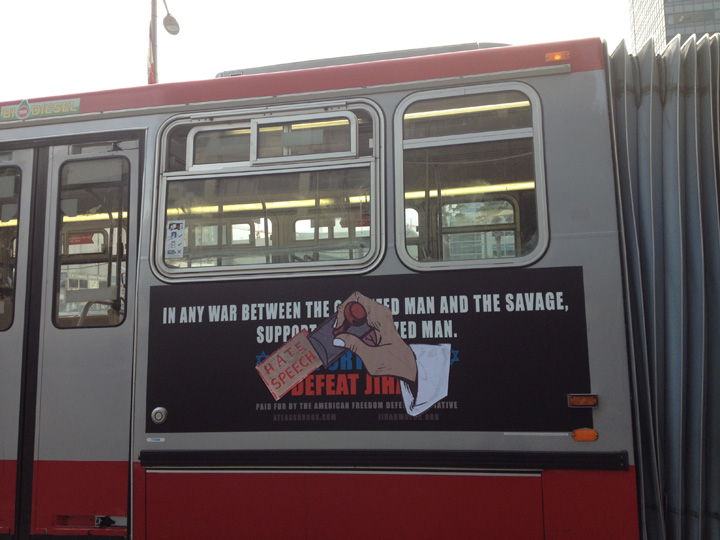 One of the Palestinians was seriously wounded and hospitalized in intensive care; eyewitness: Today I saw a lynch with my own eyes.

Jerusalem's Zion Square. Photo by Emil Salman
Palestinians wounded in West Bank vehicle fire, in possible fire bomb attack
By Avi Issacharoff | Aug.17,2012 | 11:59 AM Dozens of Jewish youths attacked three young Palestinians in Jerusalem's Zion Square early on Friday morning, in what one witness described as "a lynch" on Facebook.
One of the Palestinians was seriously wounded and hospitalized in intensive care in Hadassah University Hospital, Ein Karem. Acting Jerusalem police chief General Menachem Yitzhaki has set up a special team to investigate the incident and detain the suspects.

The three were allegedly attacked by youths shouting "Death to the Arabs" at them, as well as other racial slurs. One of them fell on the floor, and his attackers continued to beat him until he lost consciousness. They subsequently fled from the scene.

Within a short period of time rescue volunteers and Magen David Adom rescue services arrived on the scene and found the victim with no pulse and not breathing. After a lengthy resuscitation attempt, he was transferred to the hospital.

Writing on her Facebook page, one eye witness decribed the attack as a lynch: "It's late at night, and I can't sleep. My eyes are full of tears for a good few hours now and my stomach is turning inside out with the question of the loss of humanity, the image of God in mankind, a loss that I am not willing to accept."

"But today I saw a lynch with my own eyes, in Zion Square, the center of the city of Jerusalem ….. and shouts of 'A Jew is a soul and Arab is a son of a –,' were shouted loudly and dozens (!!) of youths ran and gathered and started to really beat to death three Arab youths who were walking quietly in the Ben Yehuda street," the witness wrote.

"When one of the Palestinian youths fell to the floor, the youths continued to hit him in the head, he lost consciousness, his eyes rolled, his angled head twitched, and then those who were kicking him fled and the rest gathered in a circle around, with some still shouting with hate in their eyes."

"When two volunteers [from local charities] went into the circle, they tried to perform CPR and the mass of youths standing around started to say resentfully that we are resuscitating an Arab, and when they passed near us and saw that the rest of the volunteers were shocked, they asked why we were so in shock, he is an Arab. When we returned to the area after some time had passed, and the site was marked as a murder scene, and police were there with the cousin of the victim who tried to reenact what happened, two youths stood there who did not understand why we wanted to give a bottle of water to the cousin of the victim who was transferred to hospital in critical condition, he is an Arab, and they don’t need to walk around in the center of the city, and they deserve it, because this way they will finally be afraid," she added.

Add a Comment
§Dont go there
by Rahula z
Sunday Aug 19th, 2012 10:38 AM
Really, don't play who's worse to who. It wasn't that long along that sleeping Jewish children were murdered in their sleep by Arabs. The youngest, a 4 month old baby was decapitated. Arabs killing Jews. Jews killing Arabs. equally tragic.
Add a Comment
§More additions
by Anonymous in SF
Sunday Aug 19th, 2012 2:01 PM 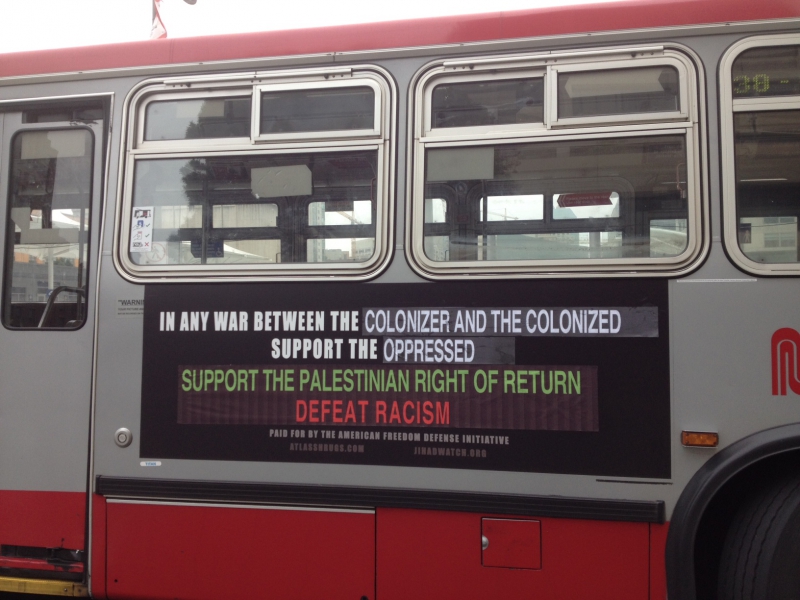 original image (1632x1224)
Ads on three more buses were revised today.
Add a Comment
§Isn't this just censorship?
by 1st Amendment
Wednesday Aug 22nd, 2012 3:20 PM
Although you might not like the message, isn't this just censorship? Isn't that why so many protest in the first place?
Add a Comment
§Free Speech Limits
by Ashamed San Franciscan
Thursday Aug 23rd, 2012 8:19 AM
No one has a right to FALSELY yell fire in a crowded theater. Calling people "savage" is not free speech; it is hate speech. These kinds of ads give the impression that all Jews hate all Arabs, also hate speech. The average American has no idea that Israel is a US military base to protect US oil profits in the Middle East. They think this is some ancient hatred. Our buses are not to promote hatred, which is all this ad does, and it ends up causing grief for the Jewish community, whether we believe in the religion or not, and most do not believe in the religion. It is a very anti-Semitic ad, both against Arabs and Jews.
Add a Comment
§Congratulations to the artists
by Sue Harris
Monday Aug 27th, 2012 5:32 PM
It is the hate groups who have the money to publish slick advertisements spreading their poison. It's inspiring to see that there are artists who have the skill and the heart to expose the hate message for what it is. It's important, too, that people in the U.S. get a different message other than hatred and vilification of a whole people.

Most of the rest of the world already knows that Israel would not last a day without the massive financial and military support of the U.S. Sadly, the Jewish people who support Israel are being used by the U.S. to maintain its hegemony in the Near East, a hegemony that is slowly crumbling nevertheless.
Add a Comment
§Smart Response! Not Silly, agitated REACTIONS!
by Yusuf bin Jussac (Joe Jussac, Jr.)
Tuesday Oct 9th, 2012 7:01 PM
Shalom!/Salaam! Peace to u all! Shalom+Salaam share THREE identical CONSONANTS S.L.M. of Hebrew/Ibrani origin (spoken by Prophet Ibrahim pbuh/Abraham) and Arabic, stands for PEACE! Hahaaaaa...I once visited the beautiful SF after staying a week in Sacramento, CA. The CHANGED wordings of the Zionists Ad is entertaining, and SMART one! That's the smart way Muslims MUST response to VERBAL ATTACK by the Zionists and their SLAVES in the USA. Take a peek at "my" Page www.scribd.com/tjoaginsing. or simply Google (BEST result!) tjoaginsing, and enjoy! Salaam!
http://www.scribd.com/tjoaginsing
Add a Comment
§a Typo
by Yusuf bin Jussac
Tuesday Oct 9th, 2012 7:05 PM
Sorry for the typo in the THIRD sentence, the word ...response...should read respond (a VERB not a NOUN) Thank you all. Salaam
http://www.scribd.com/tjoaginsing
Add a Comment
Support Independent Media
We are 100% volunteer and depend on your participation to sustain our efforts!