by via Anonymous Global
This weekend, it was disclosed by WikiLeaks the details about a system known as "TrapWire" that uses facial recognition and other techniques including high-end artificial intelligence to track and monitor individuals using countless different closed-circuit cameras operated by cities and other institutions, including private businesses. This program also monitors all social media on the internet. The software is billed as a method by which to prevent terrorism, but can of course also be used to provide unprecedented surveillance and data-mining capabilities to governments and corporations - including many with a history of using new technologies to violate the rights of citizens. 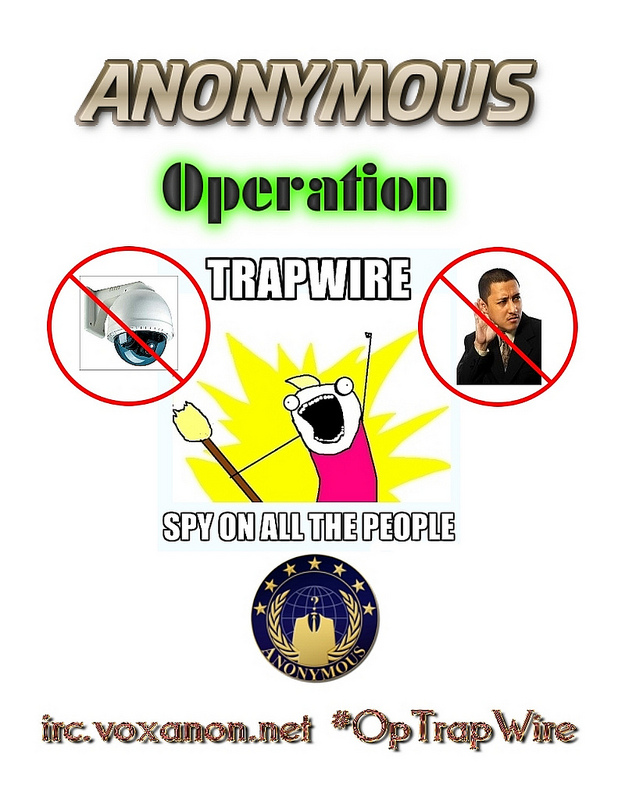 Greetings Citizens of the United States of America --

This weekend, it was disclosed by WikiLeaks the details about a system known as "TrapWire" that uses facial recognition and other techniques including high-end artificial intelligence to track and monitor individuals using countless different closed-circuit cameras operated by cities and other institutions, including private businesses. This program also monitors all social media on the internet. The software is billed as a method by which to prevent terrorism, but can of course also be used to provide unprecedented surveillance and data-mining capabilities to governments and corporations - including many with a history of using new technologies to violate the rights of citizens. TrapWire is already used in New York, Los Angeles, Las Vegas, Texas, DC, London, and other locales around the USA.

The ex-CIA agents who help run the firm are old friends of Stratfor vice president Fred Burton, whom they've briefed on their own capabilities in e-mails obtained by Anonymous hackers and provided to WikiLeaks. Stratfor has engaged in several surveillance operations against activists, such as those advocating for victims of the Bhopal disaster - on behalf of large U.S. corporatons; Burton himelf was revealed to have advocated "bankrupting" and "ruining the life" of activists like Julian Assange in e-mails to other friends. TrapWire is extremely expensive to maintain, and is usually done so at taxpayer expense; Los Angeles county alone has spent over $1.4 million dollars on the software's use in a single three-month period of 2007.

Although most of the regions in which TrapWire operates don't share information with each other, all of this is set to change; as Abraxas Applications president Dan Botsch told Burton via e-mail, "I think over time the different networks will begin to unite," noting that several networks had already begun discussions on merging their information. Abraxas itself has always had the ability to "cross-network matches" from every region at their own office. By June 2011, Washington D.C. police were engaged in a pilot project under the Departent of Homeland Security that's likely to lead to more cities using TrapWire on a more integrated basis.

Abraxas, the firm whose spin-off Abraxas Applications developed TrapWire in 2007, has long been involved in a lesser-known practice known as persona management, which involves the use of fake online "people" to gather intelligence and/or disseminate disinformation. The firm Ntrepid, created by Abraxas owner Cubic Corporation, won a 2010 CENTCOM contract to provide such capabilities for use in foreign countries; several board members of Ntrepid also sit on Abraxas.

The more we learn about TrapWire and similar systems, it becomes absolutely clear that we must at all costs shut this system down and render it useless. A giant AI electronic brain able to monitor us through a combination of access to all the CCTV cameras as well as all the online social media feeds is monstrous and Orwellian in it's implications and
possibilities. The Peoples Liberation Front and Anonymous will now put forth a call to arms, and initiate the doom of this evil and misbegotten program. We will use the following tactics to accomplish this goal:

1) The PLF and Anonymous will work closely with WikiLeaks and Project PM to gather, collate, disclose and disseminate as much information as possible about TrapWire and it's related technologies and programs. This was begun this weekend, and already much has been learned. And they are scared of this, already many sites and repositories of data on TrapWire are disappearing - being taken down by those who do not want you to know the truth about what they are doing. And WikiLeaks is at this writing enduring a massive and historic DdoS attack in an attempt to conceal this
information from the public. We will do this not only to educate the general public regarding TrapWire, but to move them to pressure their representatives to shut down funding for this and similar programs of massive surveillance, and to pass laws outlawing the creation of future projects of this type.

2) ACTION ALERT - "Smash A Cam Saturday": TrapWire has access to virtually all CCTV's that have IP/internet connectivity. We have prepared an initial map/database of these cameras across the USA, and we will continue to expand this knowledge base.

While this database is a good guide to high priority camera targets, we encourage everyone to target any camera with IP/internet connectivity. We are asking everyone to sabotage at least one CCTV per week on what we are calling "Smash A Cam Saturday". We have provided this excellent manual of different tactics and strategies for disabling or destroying these "eyes of the beast".

3) As stated above, this "monster" doesn't just have eyes that need gouging out - it also has "ears". TrapWire constantly monitors social media. In a strange twist of fate, the company that developed TrapWire also works on something called "sock-puppet" programs. These are projects designed to create thousands of fake personas on social media. We will
turn this idea and software against them, creating thousands of phony accounts and use them to produce a deluge of false triggers for the TrapWire program - essentially drowning it in "white noise".

4) Finally, the Peoples Liberation Front and Anonymous will do what we do best. We will find, hack - and destroy the servers where the AI "electronic brain" of this program is housed.

Operation TrapWire is a direct action of the over-arching Anonymous Operation USA. TrapWire is but one instance of how the government of the USA has turned against it's own citizens, designating them as suspects and enemies. Now those citizens rise, and take back their country and their freedom. Welcome to the Second American Revolution.

Government of the USA, it's to late to EXPECT US.

Peoples Liberation Front - http://www.PeoplesLiberationFront.net
Add Your Comments
Comments (Hide Comments)
§Anonymous Operation TrapWire
by 99thDimension
Antileaks twitter account is following only one twitter feed http://twitter.com/Presidencia_Ec the Official Twitter account of the Presidency of the Republic of Ecuador. Wikileaks founder Julian Assange is "under the protection of the Ecuadorian state" on top of not following it's own justice system the American Regime is also ignoring normal diplomatic channels and have gone completely rouge with a cyberwar on top of the normal kill and take wars it's now orchestrating world wide.
Add a Comment
Support Independent Media
We are 100% volunteer and depend on your participation to sustain our efforts!