Add an Event
Newswire
Calendar
Features
Home
Donate
From the Open-Publishing Calendar
From the Open-Publishing Newswire
Indybay Feature
Publish to Newswire
Add an Event
Related Categories: California | Central Valley | U.S. | Environment & Forest Defense | Government & Elections
Governor’s tunnels expected to cost $20-$47 billion, raise L.A. water rates
by Dan Bacher
Tuesday Aug 7th, 2012 2:05 PM
“Water agencies like LADWP are at a crossroads of whether to invest in the failed engineered solutions of the past or invest in the future, which provides local water and local jobs,” said Conner Everts, the executive director of the Southern California Watershed Alliance. “This report shows the true cost of speculating on faraway infrastructure and illustrates why we should instead cost-effectively reduce demand here in L.A. first.” 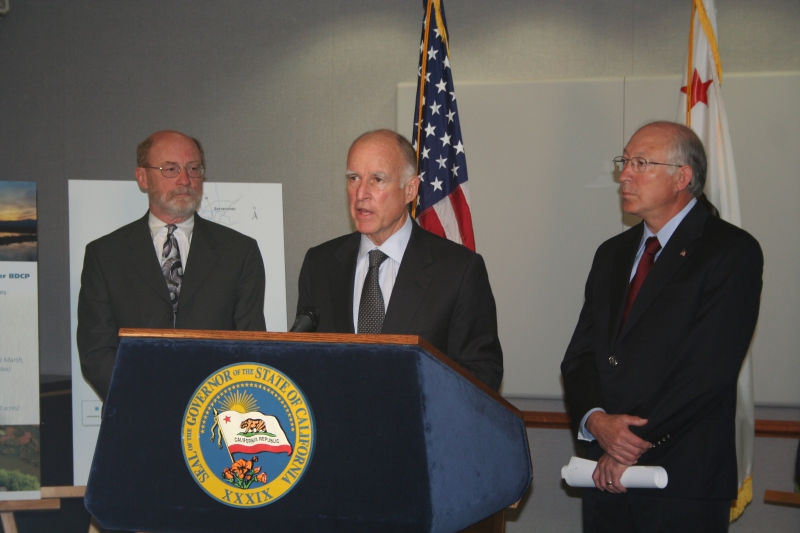 A groundbreaking economic analysis released Tuesday reveals that Los Angeles Department of Water and Power (LADWP) customers could be on the line for $2,003 to $9,182 per customer to pay for the 37-mile Peripheral Tunnels project announced by Governor Jerry Brown on July 25.

Food and Water Watch, a national consumer advocacy organization, released the analysis they commissioned from ECONorthwest, one of oldest independent economic consulting firms on the Pacific Coast.

“In these tough economic times when many Angelinos are already struggling to pay their water bills, it’s only fair that they know what the potential fiscal of this project, which will cost at least $20 billion, will be on their rates,” said Kristin Lynch, Pacific Region director of Food and Water Watch. “The numbers speak for themselves. Once Californians get the facts about this project, they will reject it, just like they did in a statewide initiative in 1982."

Jerry Brown's plan would divert the Sacramento River to Southern California with two large underground "peripheral tunnels" that are expected to hasten the extinction of Central Valley salmon, Delta smelt and other fish species. The massive public works project proposed under the Bay Delta Conservation Plan (BDCP) is estimated to cost between $21 billion and $47 billion or more.

"In 1991, Santa Barbara County voters approved the Coastal Aqueduct at an estimated cost of $270 million," said Krieger. "The aqueduct ended up costing nearly $1.7 billion and has not been necessary to meet the County's water needs. California ratepayers and taxpayers should expect the same bad deal with the Peripheral Tunnels. Just like the aqueduct, these tunnels will cost much more than promised, drown local water agencies with massive amounts of debt, and will not secure our water supply."

Krieger said most of the cost burden will fall on taxpayers and urban water ratepayers, although corporate agribusiness will receive the majority of the water from the tunnels through the Kern County Water Agency and Westlands Water District. While this taxpayer-subsidized water is intended for farming, an increasing amount of this water is being sold to real estate developers at large profits.

“Water agencies like LADWP are at a crossroads of whether to invest in the failed engineered solutions of the past or invest in the future, which provides local water and local jobs,” said Conner Everts, the executive director of the Southern California Watershed Alliance. “This report shows the true cost of speculating on faraway infrastructure and illustrates why we should instead cost-effectively reduce demand here in L.A. first.”

This analysis does not take into consideration the environmental mitigation and other related expenses that will be left for California taxpayers to cover, estimated to cost between $3 and $5 billion.

The analysis concludes with an overview of local water supply alternatives’ potential and costs. “The most reliable water is water that we save and obtain from our local communities,” said Lynch. “LADWP is already planning on importing less water from the delta and maximizing local supplies despite projected population increases. These tunnels represent failed policies of the last century. L.A. has already embraced modern, smart water solutions and can’t afford the Governor’s archaic, wasteful pipedream.”

The release of the report comes on the heels of a July 25 protest by over 300 people, including water ratepayers, fishermen, environmentalists, family farmers, and a large contingent of members of the Winnemem Wintu, Pit River, Hoopa Valley and Miwok Tribes, challenging the announcement by Governor Jerry Brown and Interior Secretary Ken Salazar to fast track the plan to build the peripheral tunnels around the California Delta. (http://www.indybay.org/newsitems/2012/07/27/18718385.php).

Dr. Jeffrey Michael, Director of Business Forecasting Center at University of the Pacific, recently released a cost-benefit analysis that found that the costs of the planned peripheral tunnels substantially outweigh the benefits. Taking into account in-Delta and upstream impacts, while not including the benefits of regulatory assurances, Dr. Michael found that 'costs of the tunnel are 2.5 times larger than its benefits, and thus the project is not economically justified due to a benefit-cost ratio of 0.4.' The report, a "Benefit-Cost Analysis of Delta Water Conveyance Tunnels," is linked here: http://www.centralvalleybusinesstimes.com/links/BenefitCostDeltaTunnel_Web.pdf.

Food and Water Watch "works to ensure the food, water and fish we consume is safe, accessible and sustainable. So we can all enjoy and trust in what we eat and drink, we help people take charge of where their food comes from, keep clean, affordable, public tap water flowing freely to our homes, protect the environmental quality of oceans, force government to do its job protecting citizens, and educate about the importance of keeping shared resources under public control."

For more information, contact: Adam Scow, California Campaigns Director, 415-293-9915, ascow(at)fwwatch.org
Add Your Comments
Support Independent Media
We are 100% volunteer and depend on your participation to sustain our efforts!