by Teresa Smith
Occupy Oakland seemed to briefly resurface as a roving FTP dance party on Friday. Fenses around former a Occupy camp site were pulled down, and the windows at Obama Headquarters got smashed. 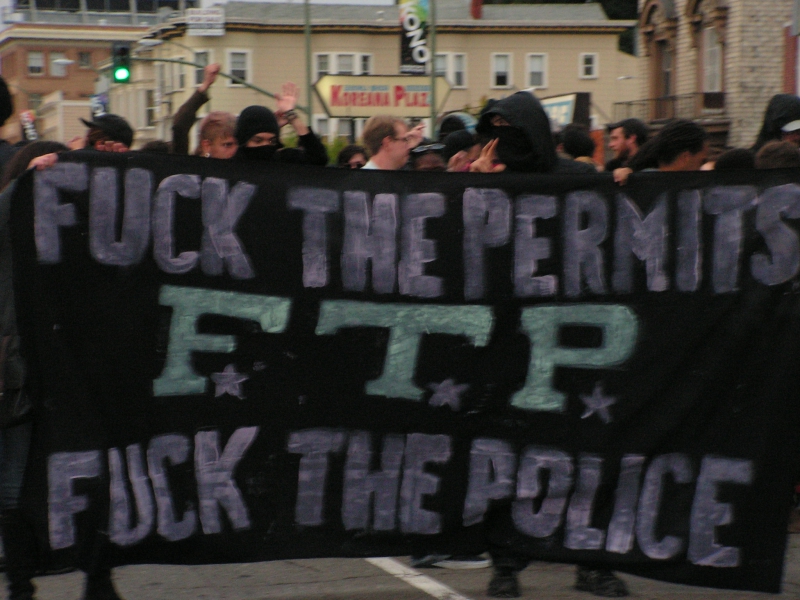 original image (2048x1536)
August 4, 2012 - Occupy Oakland seemed to reemerge for a few hours yesterday evening, in the form of a roving dance party that made its way through downtown behind a large banner that read “Fuck The Permits, Fuck The Police.”

The dance-march was in partial solidary with the venders of Art Murmur, a street fair that takes place in downtown Oakland every 1st Friday.

Over the last few months, Art Murmur has exploded into a carnivalesque block party, in which Oaklanders have taken over the streets and filled them with art, music, food, dancing, and general revelry.

On July 6, uniformed security officers informed Art Murmur venders that anyone without a permit would be ticketed, starting next month.

According to a statement on a flyer passed out by demonstrators, “the [permit] process is inaccessible, unaffordable, and there are not enough “officially sanctioned” spaces to go around.”

The flyer also explains the deeper motives behind the permits:

“Their intent is to target street artists and vendors as a means of regulating and controlling the community’s use of public space, for the benefit of expensive galleries, fancy restaurants and developers. The effect is to better provide the capital-owning business elite with a controlled and sterilized neighborhood full of passive armies of docile workers and obedient shoppers. Their ambition is to redraw urban geography according to profit motives, and convert public and social life into the plaything of the private interests. This amounts to an attempt to rob us of every free and spontaneous aspect of our communities and our lives, and replace each of them with no alternative but submission and the compulsion to consume.”

Last night, many venders and artists ignored last month’s threat of being ticketed, and set their tables in illegal spaces.

Police kept their distance though, as the dance-protest roved up and down the streets, with demonstrators chatting “fuck the police” between songs.

Many bystanders cheered when they saw the “Fuck the Police” banner as the dance party approached.

Residents of Oakland are still outraged over the police murder of 21-year-old Oscar Grant, who was shot by a transit officer in a crowded BART station on New Year's Day in 2009. The transit officer, Johannes Mehserle, was found guilty of involuntary manslaughter in July 2010, despite publicly released videos showing Mehserle pinning Grant to the ground before shooting him in the back.

The advent of camera phones has allowed the level of police brutality that occurs in Oakland, and nationwide, to be made public.

Last Friday, several hundred Oaklanders marched in solidarity with the growing Anaheim police resistance movement, and a window was broken at a bar where police officers are known to drink.

During last night's roving dance party, as demonstrators passed 19th and Telegraph Ave, a large section of the fence surrounding the former site of Occupy Oakland was pulled down. Many still remember the police raids of Occupy last fall, when protestors were beaten, tear-gassed, and had their belongings destroyed by police.

The dance then continued down Telegraph, pausing in front of the Obama Campaign Headquarters, where the windows were smashed.

The Democratic Party and Obama campaign have continually attempted to co-opt the Occupy Movement. Many Occupiers are critical of the Democratic Party for making promises that it is incapable of keeping, as it is little more than an extension of the corporations that fund it.

Perhaps the smashing of the windows in today’s march was Occupy Oakland’s way of rejecting Obama’s too-good-to-be-true campaign promises—the promise of easy hope in exchange for giving in to the farce of two parties within what is actually a unified totalitarian system.

A few minutes after the Obama Headquarters’ windows were smashed, the dance party turned down 17th. Two children in a mini-van opened the car door and gave demonstrators high-fives. 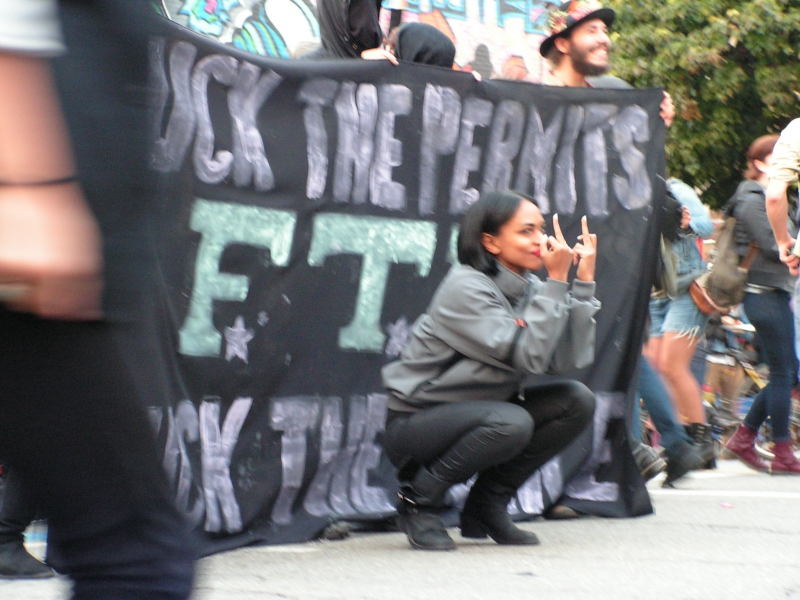 original image (2048x1536)
Add Your Comments
Latest Comments
Listed below are the latest comments about this post.
These comments are submitted anonymously by website visitors.
TITLE
AUTHOR
DATE
Common Ground
Phil Porter
"common ground for you and I to stand on"
reader
Video of last week's FTP dance party
Teresa Smith
Non-profits
Phil Porter
Too bad we can't have a riot in every city all at once.
Destroy everything that destroys freedom
property ssssss
reader
25 years
Phil Porter
Drum Circle Concept
Frugal Tease
fucking moron ass fake oakland "residents"
eat it
Dance Party that smashes windows? Really?
Phil Porter
Support Independent Media
We are 100% volunteer and depend on your participation to sustain our efforts!