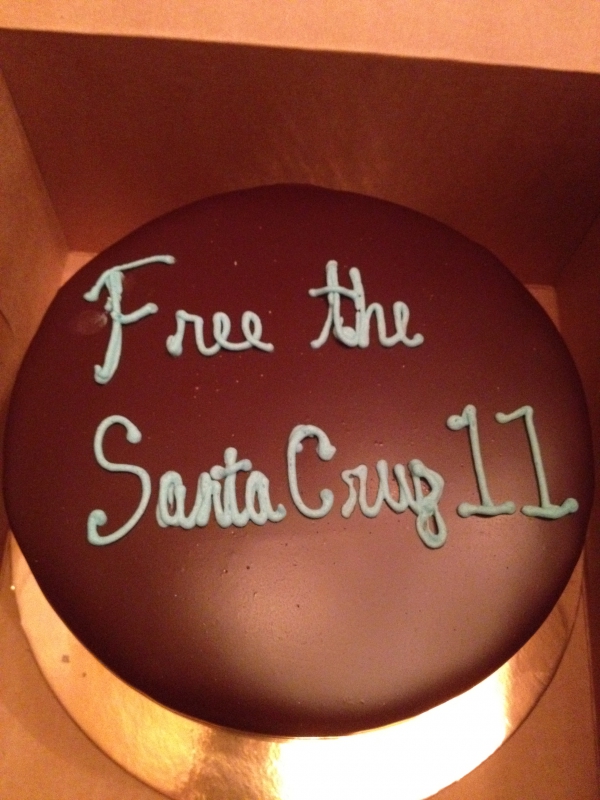 original image (2448x3264)
Respected local Civil Rights Attorney Ed Frey, has been ordered to report to the Santa Cruz County Jail on Wednesday morning of August 8th at 9AM. He is scheduled to begin serving the remainder of his six month sentence for "lodging" which is a highly-suspect section of the statewide disorderly conduct code. For instance, "lodging" is not defined anywhere in the code section, so law enforcement (and local DA's and Judges) can interpret what constitutes illegal "lodging" anyway they wish.

Testimony by several sheriff's deputies at Ed Frey's trial cited observing defendants "sleeping" with no other index of criminal activity reported. During the 92 day protest, not a single littering ticket was issued. Ed Frey provided a porto-potty every night as he and hundreds of housed and homeless people alike slept in civil disobedience of laws which criminalize sleeping.

This model of protest was copied and expanded with Occupy Santa Cruz a year later. Ed Frey served on the legal support working group and defended the encampment in court. In each of these cases, Ed worked tirelessly, providing a powerful voice, setting a moral and ethical framework for dealing with the influx of homeless people who joined the encampment primarily to meet their own physical needs.

Frey asked to be released on bail pending appeal, only to have Gallagher set bail at $50,000!
Frey served 14 days in jail before being set free at a hearing before a much calmer Judge Gallagher who set bail at $110 which was, apparently, the bail amount for that charge normally.

Frey's only real chance at appeal took place before appeals court panel, Judge Paul Marigonda and Judge Timothy Volkmann. Marigonda claimed the 6 month sentence was not excessive since he, as a prosecutor, had commonly sent defendants to jail for the maximum sentence when THEY refused community service. Of course his defendants were involved in domestic violence cases, while Ed Frey was engaged in 1st amendment activities which victimized no one.

The bottom line is it is a CRAZY use of police, court, and jail resources to arrest people for SLEEPING. Be it protestors at a protest or homeless people who can't afford a roof over their heads. It is wrong. Mean. Cruel. Counter-productive. Selective. It is a human rights abuse done under color of law. And NO ONE who is convicted for sleeping will ever refrain from future sleeping. Sleeping is not a voluntary act. Every living thing must sleep in order to live. Enforcing a sleeping ban is torturous and causes sickness, mental illness, depression, fatigue, poor immune function and yes, death. The sleeping ban causes death.

Under these circumstances HOW CAN THEY SLEEP AT NIGHT?

Attorney Ed Frey made a mockery of our local justice system so that Gallagher had to make up language to feed to his hand-picked jurors in order to get a conviction. Gallagher even used language cribbed from the 1851 Indiana State Constitution which forbade "negros and mulattos from settling in or living in the State" when he defined "lodging" as "settling in or living in a place which may include sleeping" as HIS definition of what constituted illegal behavior.

Please attend this protest. Assert our rights to seek redress of government grievances, our right to peaceably assemble, and our right to be free from cruel and unusual punishment or excessive fines.
http://www.beckyjohnsononewomantalking.blo...
Add a Comment
§Bread and Puppets
by Robert Norse
Tuesday Aug 7th, 2012 2:05 AM
I am reliably informed that India Joze's Joe Schultz will be providing breakfast munchies and drinkables between 8 and 9 Wednesday morning for weary vigil survivors.

Also the buzz is that Art and Revolution giant puppets are coming out of hibernation to lend their support to Ed, Occupy, and the Santa Cruz Eleven with a high-stepping presence.

Finally there are rumors that music muses will visit the Vigil as the evening wears on. Bring your dancing shoes!

Come one, come all !
Add a Comment
Support Independent Media
We are 100% volunteer and depend on your participation to sustain our efforts!