We did this to coincide with the first day of the grand jury in Seattle, and to continue our struggle against the forces of the State and Capital at home. Even when overt social conflict seems minimal, there are always targets lying in wait. (Also, who needs a reason or something to react to....fuck 'em!)

For the destruction of this prison society. May the spirit of revolt spread, from Anaheim to the Bay to the Northwest.
For the silent ones.
Add Your Comments

Vandals damaged two Oakland police cars near City Hall and attempted to break a window at a police station early Thursday in a coordinated attack to protest a federal investigation into anarchist activity.

A group calling itself the East Bay Uncontrollables said in an online post it was responsible for pouring glass etching fluid on the windshields of two unmarked police cars outside a police recruitment center in Frank Ogawa Plaza, slashing the tires on one vehicle, and splashing the acid-based fluid across the center's windows.

In a separate pre-dawn incident, another vandal claimed to have damaged a window at a law enforcement station near Lake Merritt.

On Friday, an Oakland police officer at the recruitment center confirmed the attack and said no suspects were detained. Police representatives did not respond to messages seeking comment.

On Thursday evening, a post appeared on Indybay.org, an online bulletin board and news site that supports "local, regional and global struggles against exploitation and oppression."

The East Bay Uncontrollables said the attacks were designed to protest a Seattle grand jury's investigation into vandalism during May Day protests, "and to continue our struggle against the forces of the State and Capital at home."

Another anonymous poster wrote that the attack on the Lake Merritt station had damaged one window but failed to break another. 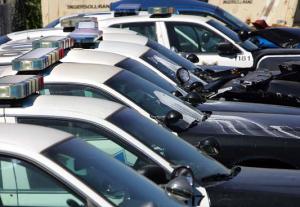 A crackdown on vandalism has apparently caused vandals to vandalize.

At least eight police vehicles were damaged in San Francisco and Oakland last week by activists who are reportedly opposing a federal investigation into anarchism and vandalism in the Pacific Northwest.

On Monday, San Francisco police Officer Albie Esparza confirmed six cruisers at a maintenance yard in the 1800 block of Jerrold Avenue had been vandalized “sometime over the weekend.” However, IndyBay.org — a radical independent media website — claimed the vandalism happened early Thursday morning.

Windows were broken, tires were slashed and paint was thrown onto the vehicles, Esparza said. No arrests have been made.

And in downtown Oakland on Thursday, two police cars parked at Frank H. Ogawa Plaza were reportedly vandalized before dawn. A colored liquid had been poured onto the windshields and windows, police said, and one of the car’s tires had been slashed.

The vandalism was praised Thursday on IndyBay. One post claimed activists had damaged eight SFPD cars and a Sheriff’s Department van at a maintenance yard. But police reports contradicted that.

The vandalism was said to be done in protest over a Washington federal grand jury investigation into the violence and vandalism that occurred during Seattle’s May Day demonstrations.

“Greetings of solidarity and complicity to those resisting the grand jury in the Pacific Northwest,” the Thursday post on IndyBay said. “In whatever way you choose to resist state repression, we will act to spread and strengthen your struggle.”

A commenter on IndyBay called the vandalism in San Francisco the best protest action “in a long time.”

However, the enraged vandals might as well have been tossing items in a junkyard. The damaged cop cars in San Francisco had long been out of service, Esparza said.

Still, “This type of behavior is unacceptable and extremely irresponsible,” Esparza said. “People tend to forget that it’s taxpayers who pay for this.”

The vandalism is even more galling, Esparza added, in a time of lean budgets.
http://www.sfexaminer.com/local/crime/2012...
Add a Comment
Support Independent Media
We are 100% volunteer and depend on your participation to sustain our efforts!