Add an Event
Newswire
Calendar
Features
Home
Donate
From the Open-Publishing Calendar
From the Open-Publishing Newswire
Indybay Feature
Publish to Newswire
Add an Event
Related Categories: Palestine | East Bay | South Bay | Anti-War | Racial Justice
Alameda County Proclaims Palestinian Cultural Day Despite Opposition
by Sharat G. Lin
Sunday Jul 29th, 2012 2:56 AM
Alameda County became the second California county to recognize Palestinian residents as a people, having a rich culture, and contributing to the community. An earlier attempt by opponents to scuttle the proclamation in June was overcome by negotiations between residents and county supervisors. Supervisors Nate Miley and Wilma Chan presented the proclamation on behalf of the entire Board on July 24, 2012. 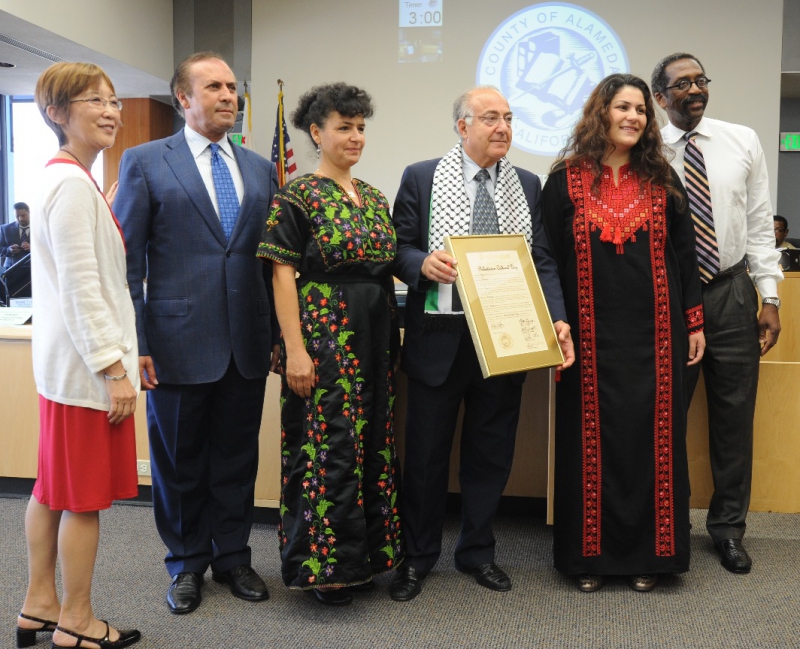 The proclamation is a victory for Palestinian residents who have long sought recognition as a community despite sometimes fierce opposition. It recognizes Palestinians as a people who “trace their roots back to this historic land of Palestine” and that “Palestinian residents of Alameda County now number approximately 20,000 and continue to make major contributions to the County.”[1]

Alameda County becomes the second in California to officially recognize Palestinian Cultural Day, following the lead of Santa Clara County which issued its first proclamation in 2002. But getting started ten years ago was very challenging because of fierce opposition from supporters of Israel who feared the proclamations would erode Israel’s image by raising public awareness of recent Palestinian history.

The Alameda County Proclamation of Palestinian Cultural Day was originally placed on the Board of Supervisors agenda for June 5, 2012. But it was abruptly pulled from the agenda the previous morning after Board President Nate Miley was besieged by protests from Zionists. One hate-filled blog called Palestinians “Jew-haters” and dismissed the Palestinian narrative as “mythical.”[2]

Myrna David of the Jewish Community Relations Council of the East Bay said, “There was no pressure from the organized Jewish community.”[3]

Palestinian community organizer, Kira Azzam of the Buena Vista United Methodist Church reminded the community, “This was and remains a statement to promote Palestinian cultural heritage.”

When it became clear that continuing to oppose the recognition of a local community of residents and their cultural heritage would be politically untenable, opponents of the proclamation finally settled for a minor change in wording of the proclamation. They insisted that a reference in the first clause be changed from Palestinians who “profess either a Christian, Jewish, or Muslim faith,” to “profess many faiths.”

The concern of Israel’s supporters is that Jews living in Israel and the Palestinian Territories must have a separate identity which is the very basis for a Jewish State and for a potential future Two State solution. To suggest that all residents of Israel-Palestine are one people of merely different faiths would subvert the rationale for a Jewish State that gives a “birthright” exclusively to Jews.

With agreement on modified wording in the Proclamation, Palestinian Cultural Day was placed back on the Alameda County Board of Supervisors agenda for its regular meeting of July 24. Though sponsored by Wilma Chan and Nate Miley, two other supervisors – Keith Carson and Richard Valle quickly signed on. Representing the more conservative District 1, Scott Haggerty was under continued Zionist pressure, then signed on to the Proclamation at the last minute.

In a victory party after the Board meeting, one proclamation supporter exclaimed, “Finally Palestinians are people [in Alameda County]!”

When Palestinian residents of Santa Clara County first sought recognition for Palestine Day, they were met with a firestorm of opposition from Zionists and the reluctance of most elected leaders to even touch the controversial subject. It took the courage of Supervisor Pete McHugh to lead the way. As a result of intense lobbying on both sides, a tacit agreement was worked out to focus the proclamation on recognizing Palestinian culture while avoiding the Palestinian historical narrative and any inevitable implication of oppression. The first Palestinian Cultural Day in Santa Clara County was born.

The annual ceremony at the Santa Clara County Government Center in San José begins with the raising of the American and Palestinian flags in James P. McEntee Plaza. This year’s program on May 15, 2012 featured two guest speakers.

Sam Jadallah, a Silicon Valley venture capitalist, a former vice president of Microsoft, and co-founder of the Institute for Middle East Understanding, is the son of immigrants from al-Bireh, Palestine. Mr. Jadallah credited his success in Silicon Valley to the fact that “entrepreneurial culture is deeply rooted” among Palestinians. He cited other local examples, such as Phil Jabar, owner of Philz Coffee, who will soon have a dozen coffee shops around the Bay Area.

However, Mr. Jadallah went on to explain that the Palestinian experience cannot be understood without considering the “dark side of the Israeli military occupation” where, for example, Palestinian family members living 7 miles apart cannot see each other because of Israel’s apartheid wall.

The second guest speaker, Hala Gabriel, was in the process of completing a documentary film “Road to Tantura” that traces her family’s history from a fishing village south of Haifa to expulsion by the Alexandroni Brigade in May 1948 to her father’s incarceration for two years in an Israeli prison to exile in the Yarmouk Refugee Camp in Syria. To produce the film she interviewed villagers who once lived in Tantura and soldiers, most born in the U.S. or Europe, who had participated in the armed attack on the village. Ms. Gabriel also recounted her personal experiences of being humiliated by Israeli immigration officials, strip searched, and then initially denied entry into the land of her parents.

Both Sam Jadallah and Hala Gabriel exemplified why Palestinian heritage and culture cannot be divorced from the historical experience of the Palestinian people over the past century.

Talks like these that cannot be apolitical and “purely cultural” have raised concerns at the Jewish Community Relations Council. Palestinian Cultural Day should not be allowed to become “a forum to disparage Israel,” said Karen Stiller, director of JCRC of the Peninsula. “We’ve never said don’t hold Palestinian Cultural Day, we just want them to put the culture back in it.” [3]

Yet the same standard is never applied to other communities. Every year the Santa Clara County Board of Supervisors observe Holocaust Remembrance Day (Yom HaShoah) in April or early May, depending on when the 27th of Nisan falls. The ceremony held in the Board of Supervisors chamber is explicitly political, that the Holocaust must never be forgotten and never be repeated, and rightfully so.

Every year the Santa Clara County Board of Supervisors proclaim Armenian Genocide Remembrance Day in April in the Board of Supervisors chamber. This year’s ceremony on April 24, 2012, officially recognizing the victims in Armenia from 1915 to 1923, proclaimed that genocide must never be forgotten and never be repeated, and rightfully so.

Never has the Palestinian community complained that Yom HaShoah or Armenian Genocide Remembrance Day should be “only cultural” or that the events should not disparage the perpetrators.

As Professor George Bisharat of the Hastings College of Law at the University of California in San Francisco, who gave the keynote address on Palestinian Cultural Day in 2011, explained, “The experience of al-Nakbah is something that is at the very core of our identity as Palestinians, and that really marks and defines us as a people.”

Professor Bisharat continued, “There is a silver lining in all of these difficult experiences that we faced collectively. It has helped us forge that part of our identity that is represented in the word ‘sumud’ which means steadfastness. It is that characteristic that has permitted us to survive as a people, as a collectivity, and many of us as individuals to thrive as business people, as political leaders, as researchers, and various other capacities.”

For this reason Palestinian Cultural Day in Santa Clara County has always been observed on May 15th or the closest weekday before that. May 15th marks the anniversary of the Day of Catastrophe (Yom al-Nakbah), the culmination of months of attacks in which 750,000 Palestinians were forced from their homes by Zionist paramilitary organizations such as the Irgun Zvai Leumi, Lehi, Haganah, and the various terrorist brigades. This violent ethnic cleansing paved the way for the establishment of the State of Israel, which declared independence from Britain on May 14, 1948.

Why not proclaim it Yom al-Nakbah or Palestinian Catastrophe Day? Like the Shoah (Holocaust) and the Armenian genocide, al-Nakbah too must never be forgotten and never be repeated, and rightfully so. 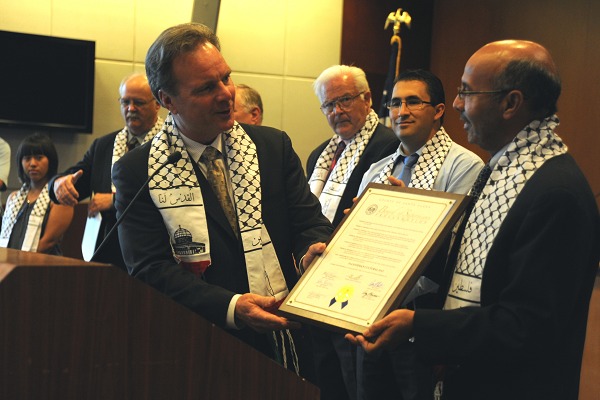 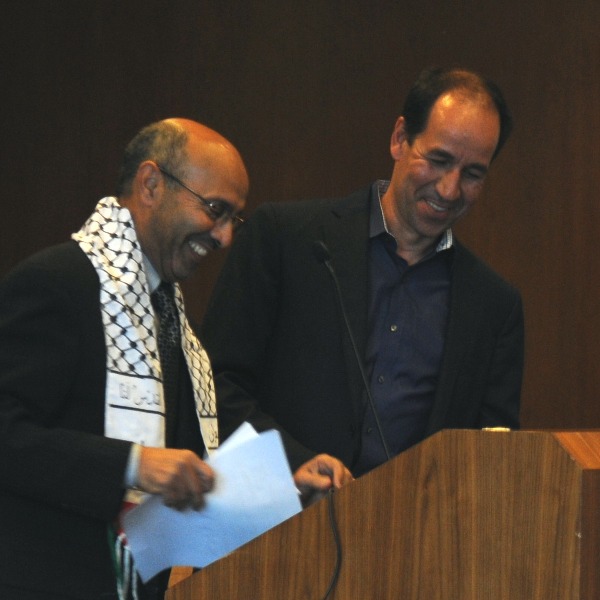 Samir Laymoun introducing Sam Jadallah to give the keynote address at Palestinian Cultural Day on May 15, 2012 in San José.
§Hala Gabriel
by Sharat G. Lin Sunday Jul 29th, 2012 2:56 AM 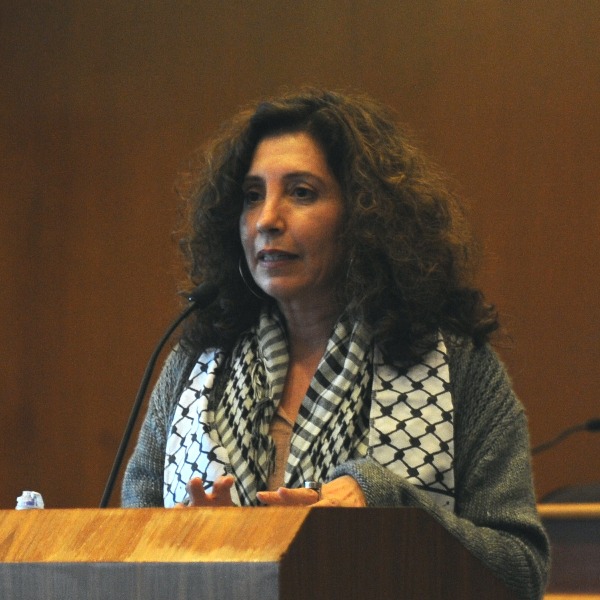 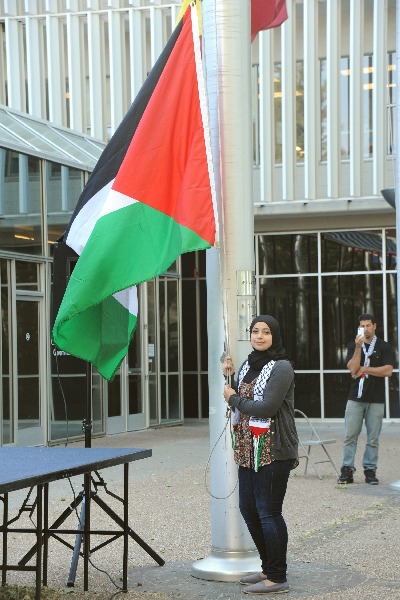 Palestinian community members participating in the raising of U.S. and Palestinian flags in James P. McEntee Plaza in San José on May 15, 2012.
§George Bisharat
by Sharat G. Lin Sunday Jul 29th, 2012 2:56 AM 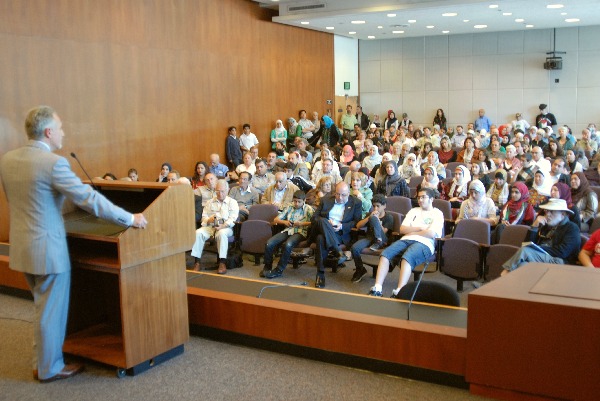 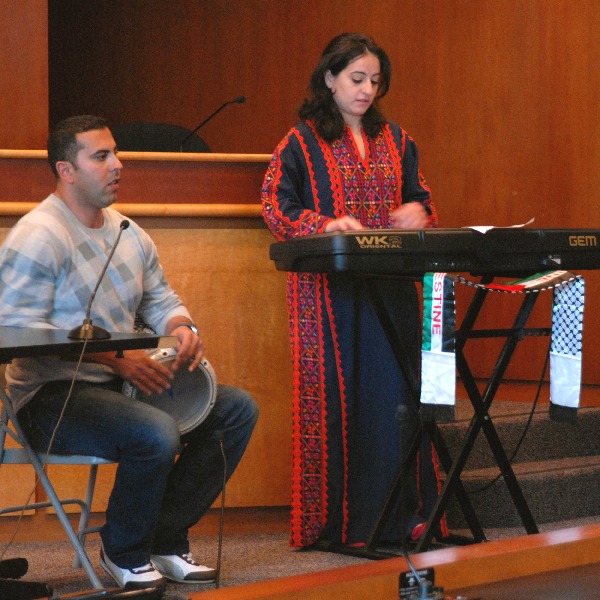 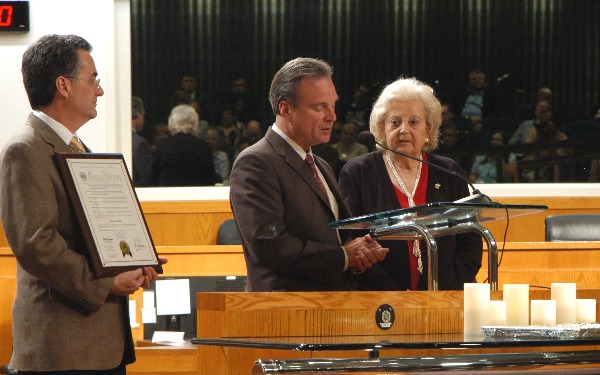 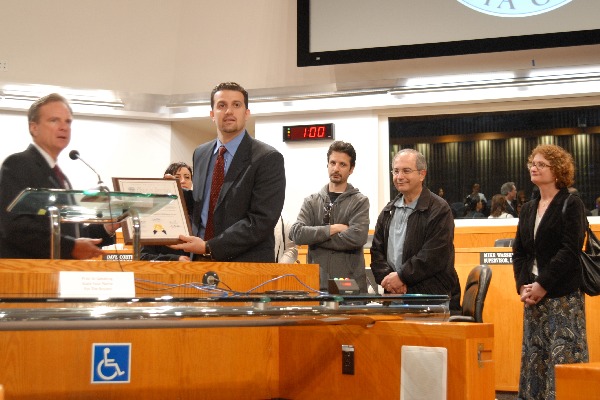 Santa Clara County Board of Supervisors President Dave Cortese (left) presenting proclamation to Armenian residents on April 26, 2011.
Add Your Comments
Support Independent Media
We are 100% volunteer and depend on your participation to sustain our efforts!