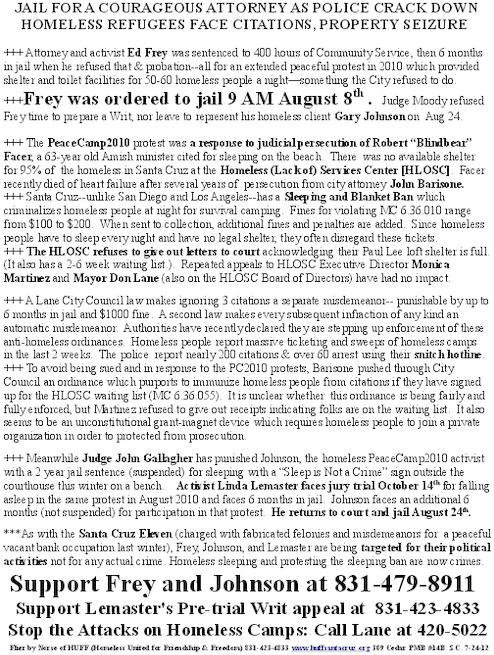 The flier above was prepared before the hearing today.

Judge Moody, a visiting judge sitting in for Judge John Gallagher, heard Ed Frey's presentation. Frey said he was preparing a brief and asked that Frey's own hearing be postponed until August 24th--when Gary Johnson, Ed's client and co-defendant, is slated to appear (and face a return to jail).

According to witness Becky Johnson (no relation), the D.A.insisted Frey needed to go to jail. Frey then asked to be allowed to appear at Gary Johnson's hearing from jail. Moody reportedly retorted " "NO, you're just wasting our money. Your case had been on calendar a zillion times." He then ordered Frey to "check in" with the jail today.
Add Your Comments
LATEST COMMENTS ABOUT THIS ARTICLE
Listed below are the latest comments about this post.
These comments are submitted anonymously by website visitors.