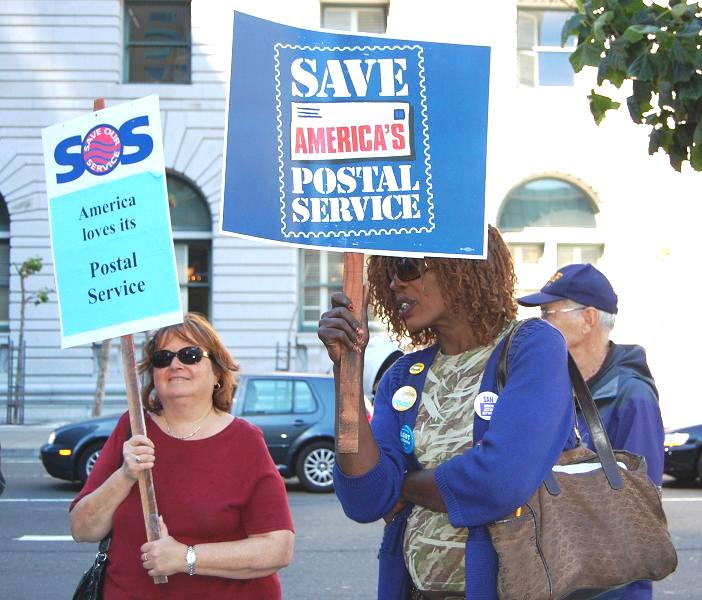 March to Save the People’s Post Office
Wednesday, June 27, held a rally, march, and occupy of the Civic Center Post Office which serves many of the city’s homeless. We gathered in solidarity to support the national June 25-28 Hunger Strike by postal workers in Washington DC. This movement is growing across the country to stop threats of eliminating 220,000 living-wage jobs and closing 3,700 post offices including four in S.F. The majority of post offices threatened are in poor neighborhoods and rural areas.

These job-cutting, service-slashing ideas affect people who depend on deliveries of medications, social security, and pension checks. Though we live in a digital communication society, the arrival of our mail is the only communication in the country that reaches everyone 6 days a week. This service is a public resource and these measures are steps toward privatization.

Why is this public institution since 1792 in danger? In 2006, Congress manufactured a “budget crisis” through the Postal Accountability and Enhancement Act which forced the United States Postal Service to pre-fund its future health care benefit payments to retirees for the next 75 years. This jeopardized USPS with a $20 billion debt. No other government or private corporation is required to do this.

The rally at the Federal Building kicked off with speakers from the coalition including, postal workers, labor and community groups, occupy Oakland and occupy SF.
Coalition member, Michael of SF Gray Panthers spoke of the effects on seniors and the importance of keeping these good wage jobs traditionally held by people of color. Anne from Living Wage told of the necessity of keeping the PO open for folks to receive Social Security checks. Angela, a postal carrier asked what can congress be thinking by allowing the lay off of 220,000 people. There are already hundreds of thousands of workers already unemployed and many have run out of unemployment!

Gary of the Union of Unemployed Workers, called for organizing the unemployed. The organization will have a march July 11 at noon from Oscar Grant Plaza to the Oakland unemployment office. Unionofunemployedworkers [at] gmail.com

After the rally, people marched through UN Plaza, took the street and continued to the Civic Center PO chanting;
The 1% full of greed Don’t’ let them take away what the people need!
Whose Post Office? Our Post Office!
No Closures No Cuts No Ifs’ ands’ or buts’!
Our Post Office is a People’s Institution It’s been around since the Constitution!

The entire protest reached the Civic Center PO and occupied it! We continued chanting and listening to people talk of saving the post office. Dave sang us his song, “Mr. Postman” “Mr. Postman, don’t go away, you walk down every street in the USA.” All then walked outside to continue protesting. With our show of determination and power, we can keep this post office, and all others open to keep serving the public. And we will be back!” 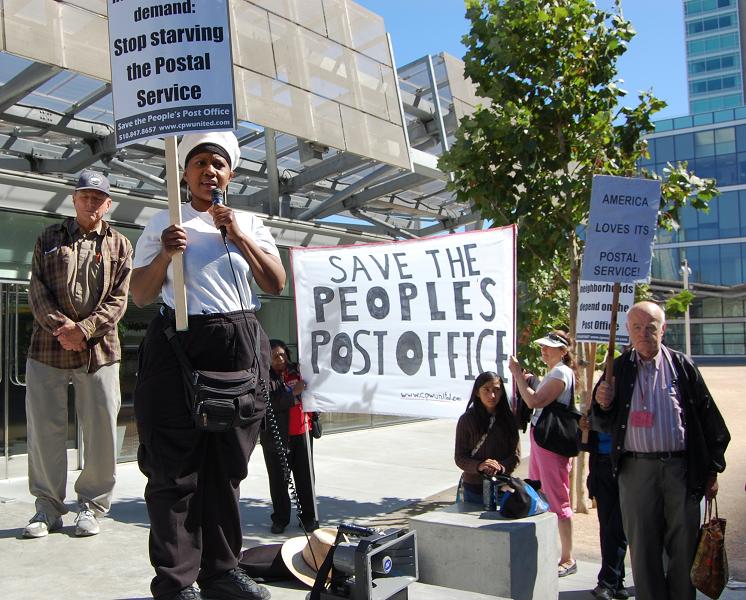 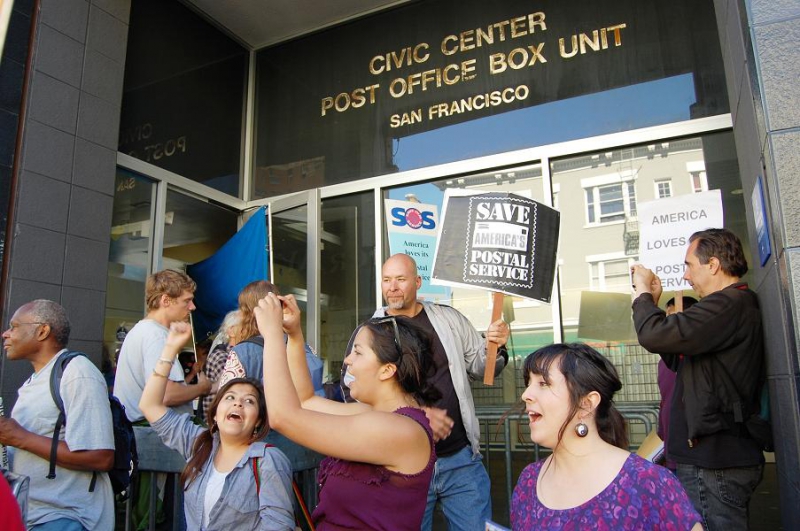 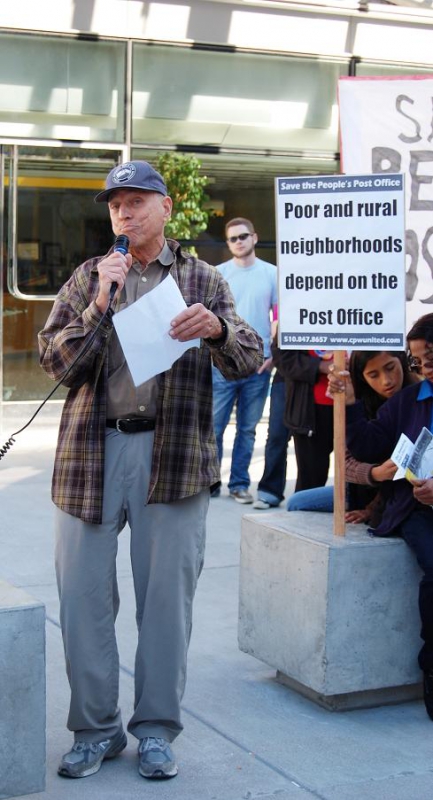 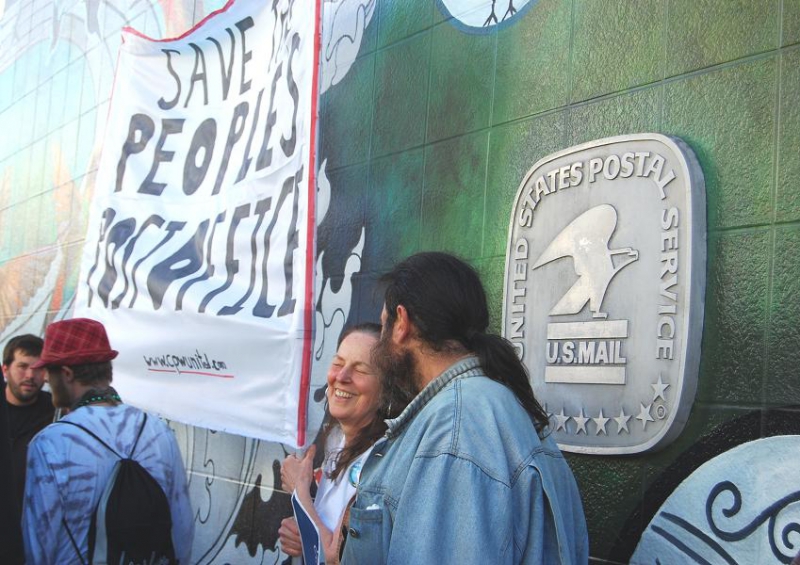 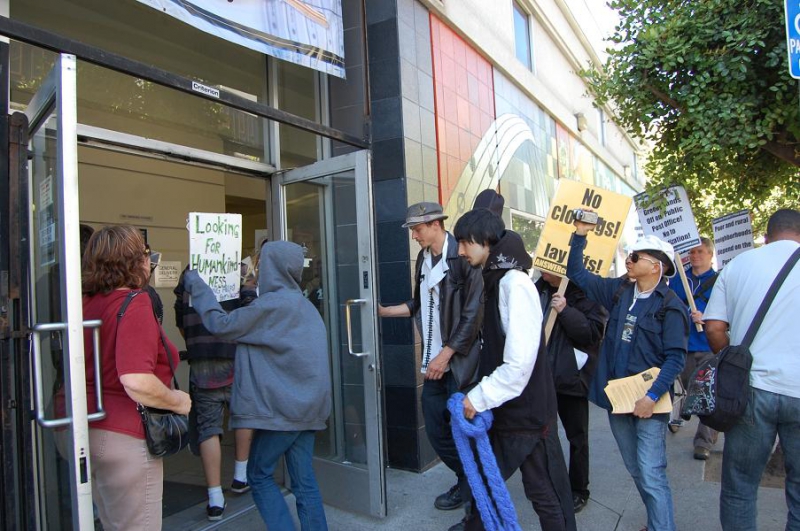 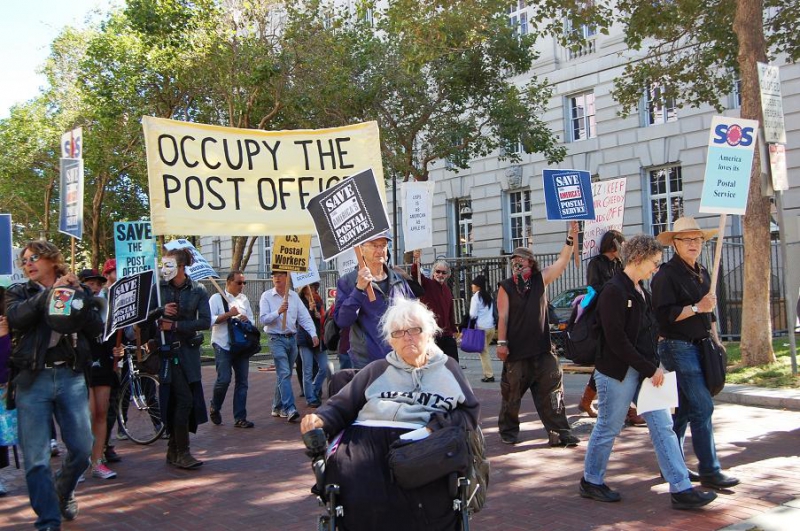 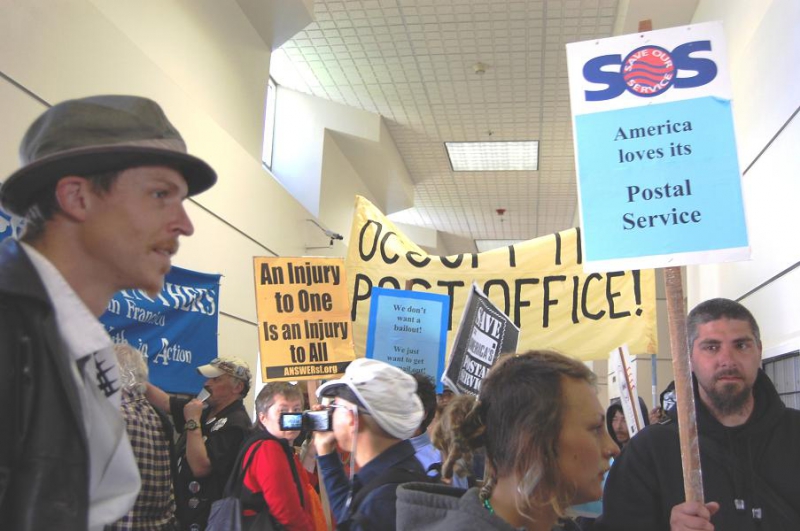 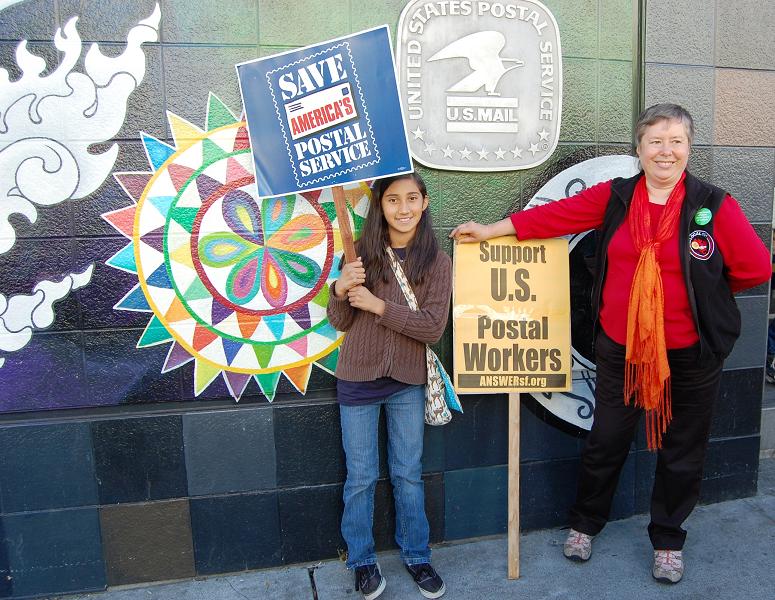 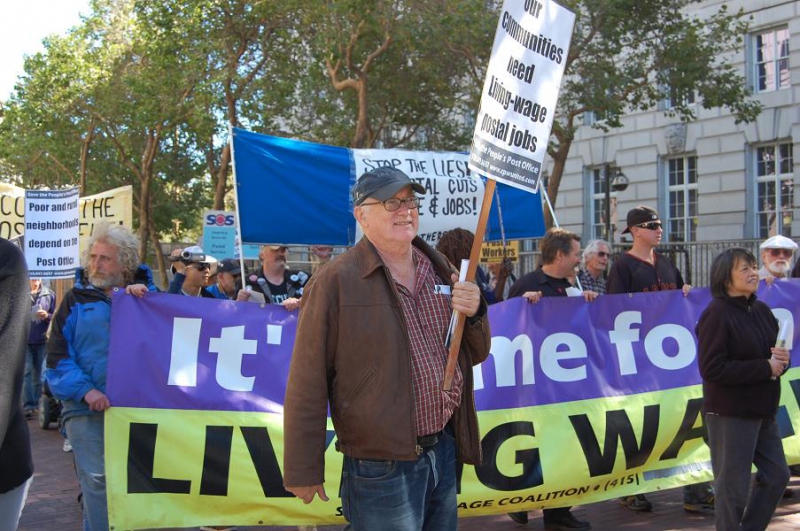 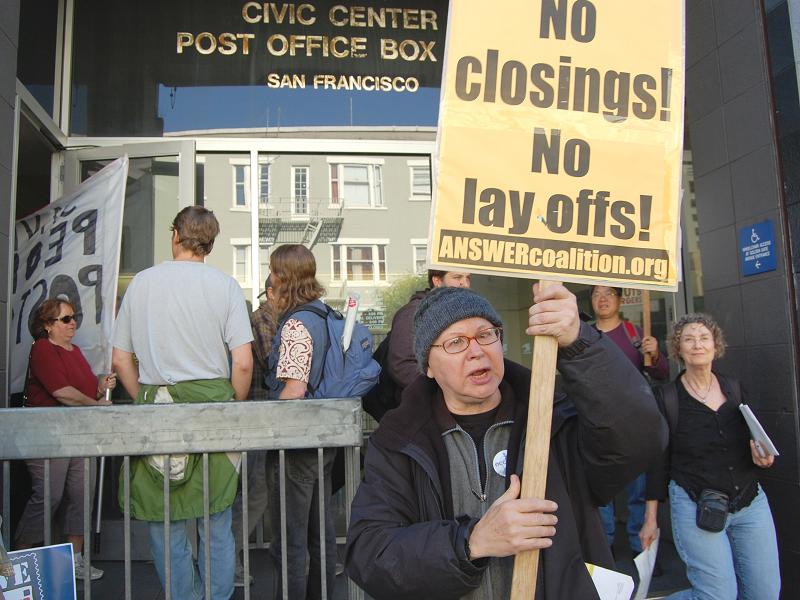 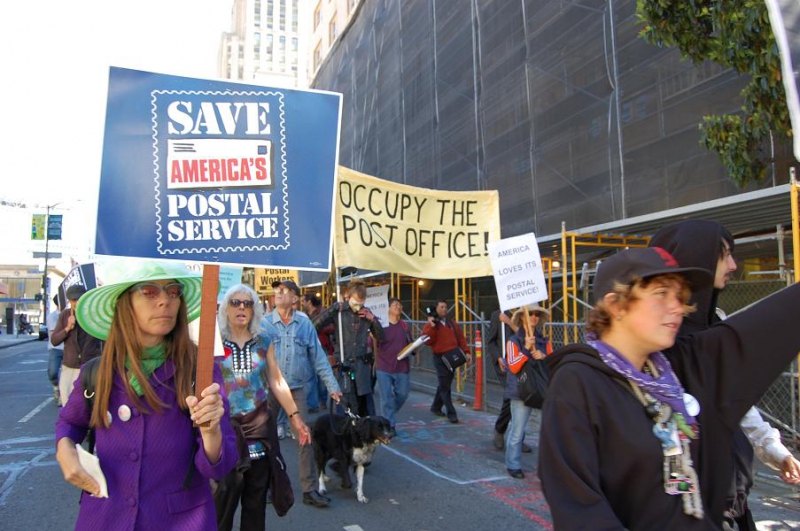 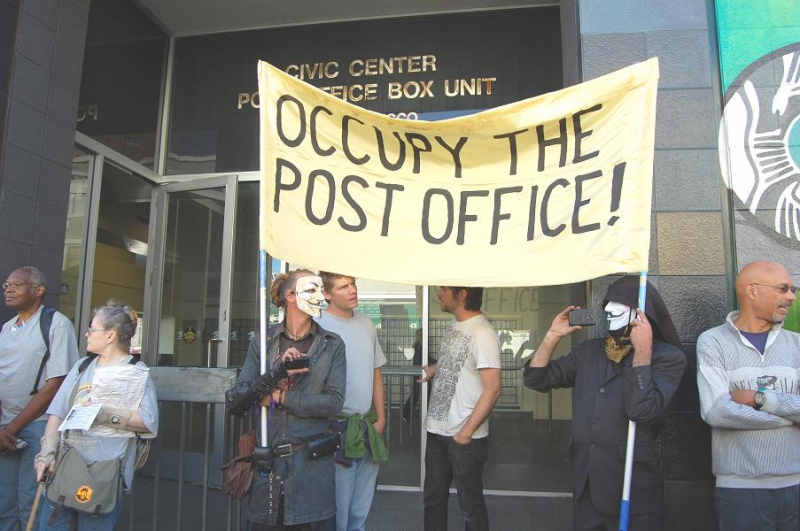 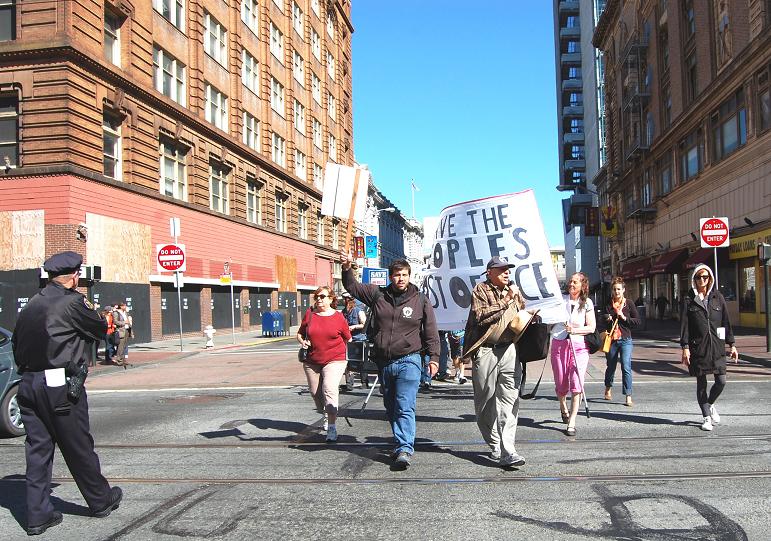 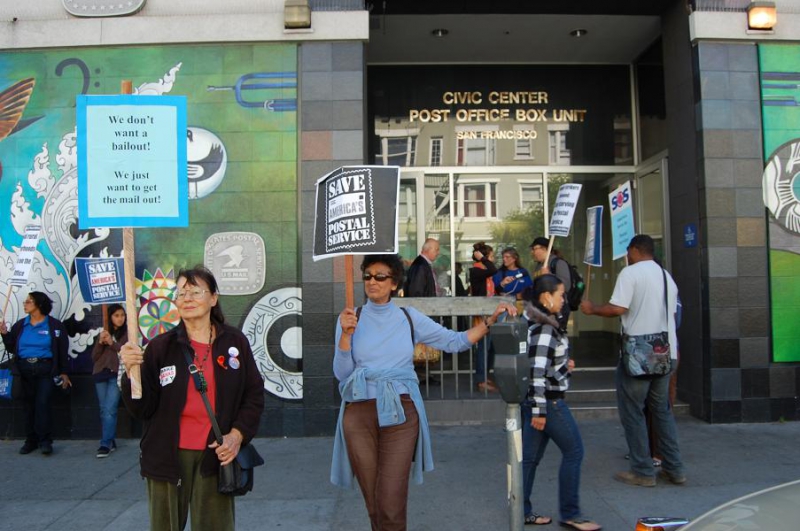 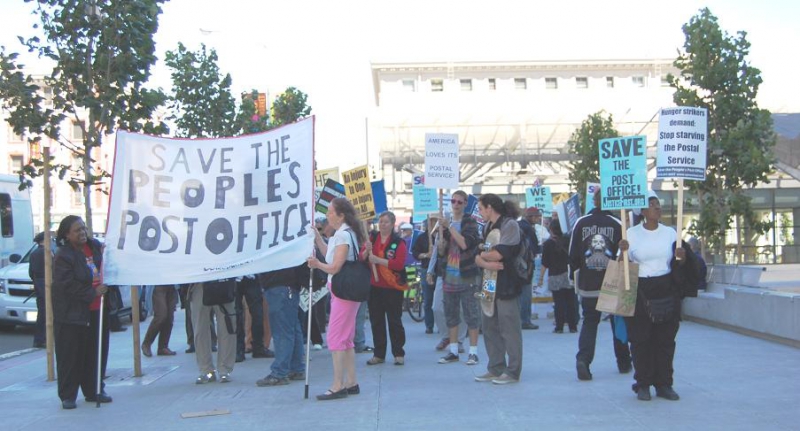 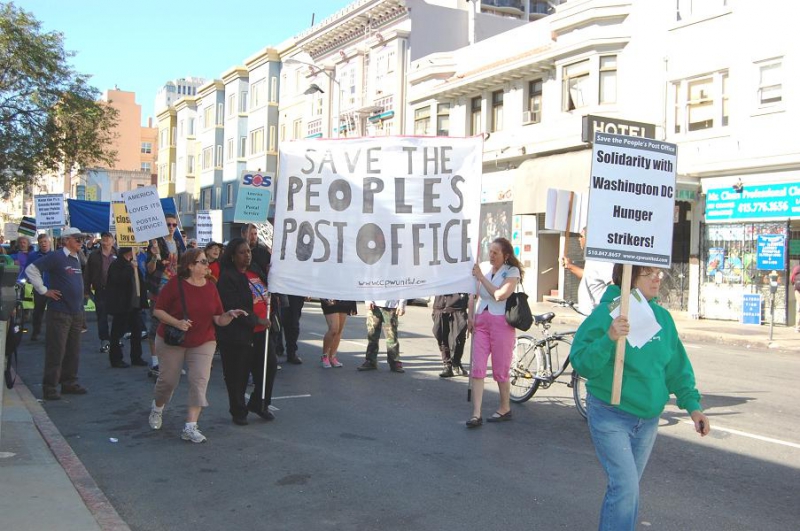 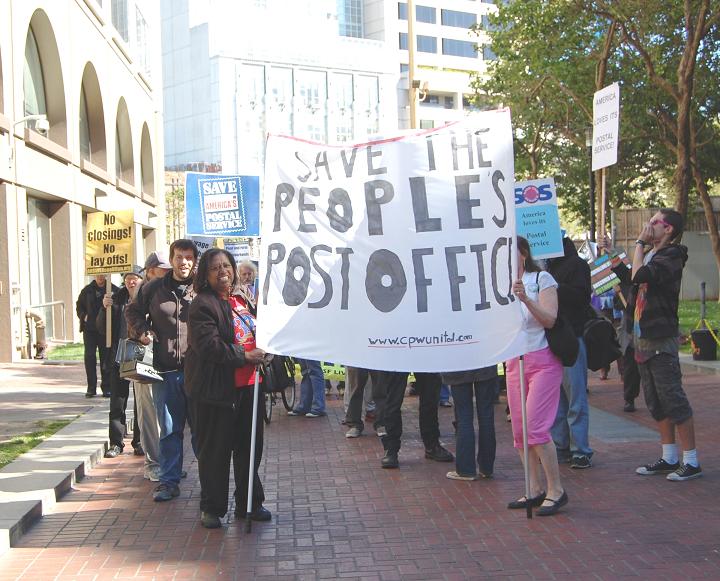 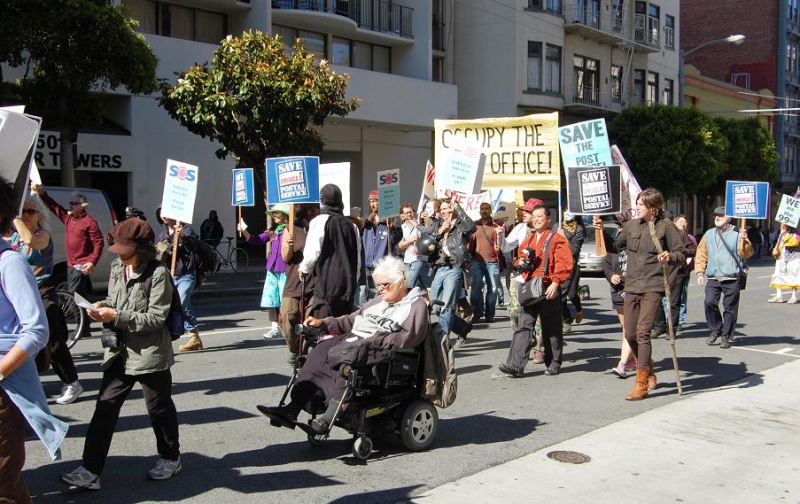 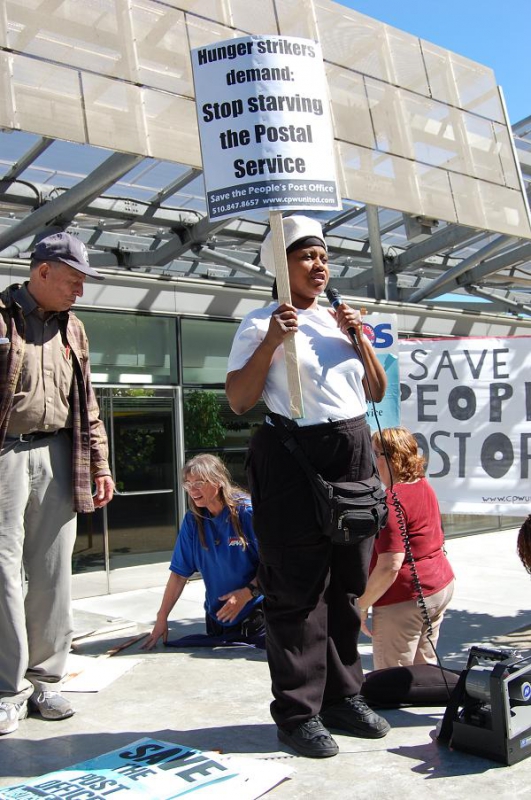 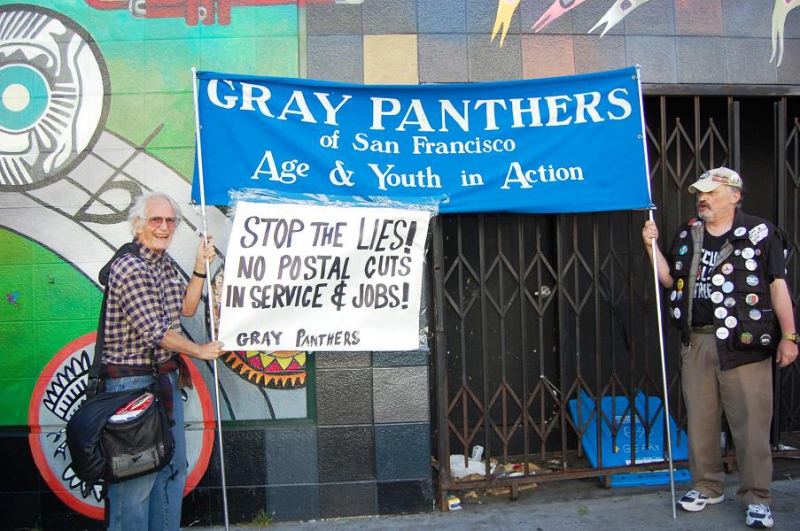 original image (903x600)
Banner of the Gray Panthers
Add Your Comments
LATEST COMMENTS ABOUT THIS ARTICLE
Listed below are the latest comments about this post.
These comments are submitted anonymously by website visitors.