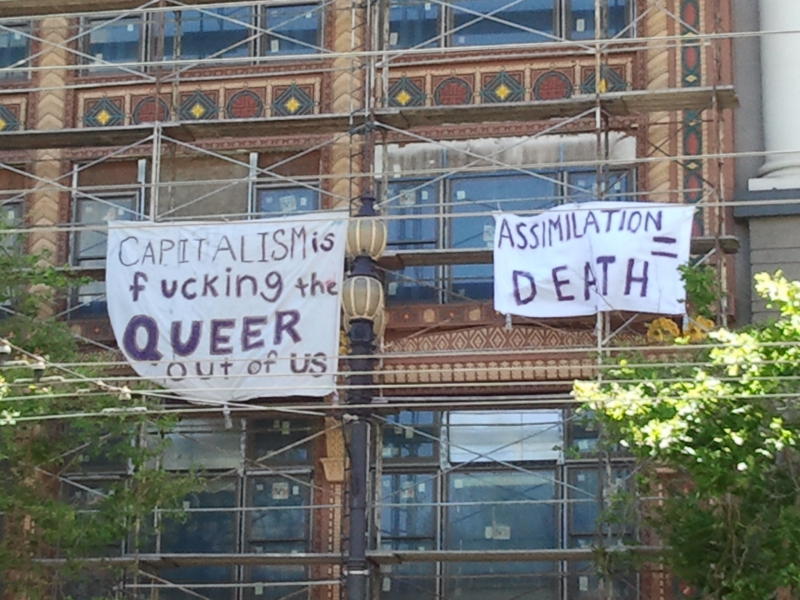 original image (2560x1920)
Once again, the corporate nonsense that San Francisco calls "Gay Pride" has come and gone. Once again the assimilation project attempted to sedate the masses of queers into believing that through their common love of gay cops, of "queer" themed floats sponsored by banks and all the absurdly rainbow themed merchandise that they have some sort of community.

And once again some angry queer kids would have nothing to do with that and wanted to make some noise- or an appearence rather. They dropped two banners that said "Capitalism is Fucking the Queer out of US" and "Assimilation = Death" from a building in the heart of downtown while the massive parade glided by. The group was briefly detained by the police but no one got arrested, haha. When everyone came down the cops, shocked, asked " Why are there so many Women?" Fucking idiots. Later the angry queers shouted "were here were queer fuck the police" and "cops bash queers" at the SFPD as their gay cop brigade marched by.

They also distributed the fallowing text:


We walk down the streets of San Francisco past the rainbow saturated businesses with that flag that supposedly represents us flying high. We are on our way to see a trick, our friends on their way to pick up hormones, on their way to stay at a “trans and lgbtq youth friendly” shelter. We are told that here, things are different and in our bones we certainly know that they can be- but only if you have money.

Upper class “lgbt” culture. There are billboards with drinks alluding to the type of sex we might have, there is so much industry surrounding “being queer” it’s hard to keep up with what market has been penetrated last.
Apparently, this is mecca. How empty it is.

Capitalization of queer culture is in the wake of the anxieties of rich queers to assimilate into straight, bourgeois society. The only celebrated culture of queer then, is that of the capitalist queer.
Once a position goes to market and is adapted as a marketable social phenomenon , it automatically loses all of its teeth and is no longer a threat.

This is what happens when rich queers continue to assimilate- believing that if they too can marry, have a business and express romance in public that then they will be “free” of the subjugation of straight society- by becoming just like them.

Assimilation is queers and all other members of the not-straight society- attempting to emulate heteronormative relationship structures which are vital to the reproduction of capitalist society. Assimilation is death as all of capital is a total dispossession of all that harbors something like living.

As we find refuge in our small networks of solidarity it is in spite of the agonizing alienation we feel on a daily basis in this society. The extent of our existent within this world as queers has nothing to do with the marketability of our lifestyles and sex lives but is due to our exploitation. We hear of another friend beat up, murdered, things we hear from our queer community that reaches our ears through the grape vine that consists of panic and crawling skin.

We are constantly forced to submit to the whims of whoever

we can get resources from- whether it be a sugar daddy, non-profits, the bourgeoisie who open their hearts to us for a moment- we have learned how to hold our tongues, we have examined the ways that we are spoken to like insolent fuck ups by older, richer queers who, even with their stares seem to be saying “ Don’t you know 6hings get better- so get with the fucking program kid.”

There are campaigns totally devoted to saving us- well-meaning college queers helping “homeless queer youth” get back on the right path. There is so much sympathy, pity and disdainful romanticization to go around it has become a market. This is our exposure- as the problems of the queer community or as the privately exploited. Beyond that we are petty annoyances or otherwise invisible. Aren't we happy that we have so much exposure now?

Capitalist queers don't see that in life under capital things cannot be better for some of us and never will be. Clearly there is a divide between the queers who have and the queers who have not.
To us they are not even queer- they too are our enemies.
What we are calling for is the total destruction of straight culture- the culture of capital and all the bourgeoisie queers who lap it up so pathetically.

We don't want the dancing, the fucking, the partying to stop- lord knows we love a good dance party- but we want the dancing and partying and fucking and loving and bonding to be a top the grave of straight society, of the society that silences us.

What is destructive to straight society- we know can never be commodified and purged of rebellion. So we maintain our stance- as fierce fags, queers, dykes and trans girls and bois and gender queers and all the combination and in be tweens and those that negate it all at the same time.
We bid our time, striking here and there and fantasize of a world where all of the exploited of the world can come together and attack. We want to find you, comrade, if this too is what you want.

For the total destruction of Capital,
bad bitches who will fuck your shit up. 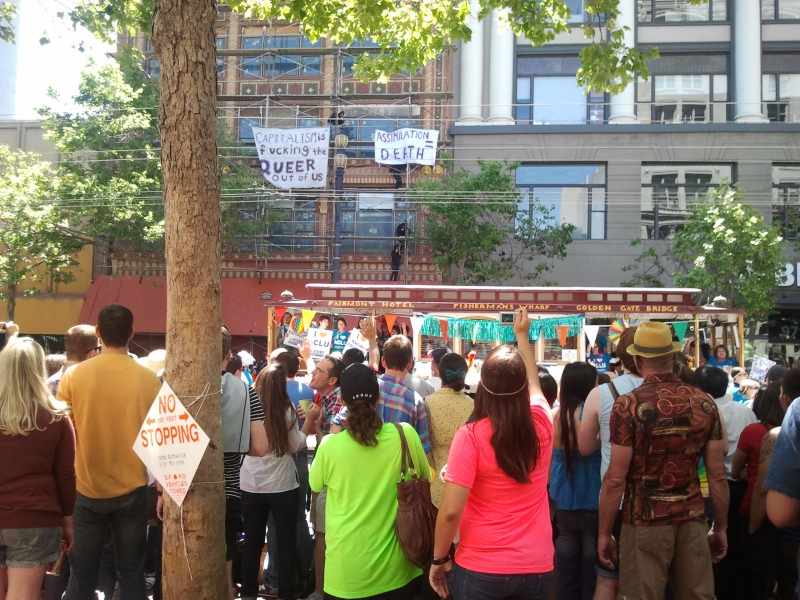 original image (2560x1920)
Add Your Comments
LATEST COMMENTS ABOUT THIS ARTICLE
Listed below are the latest comments about this post.
These comments are submitted anonymously by website visitors.