Unarmed Raheim was barely out of his teens when he was killed by school police on Joaquin Miller Rd. Officers Bhatt and Bellusa killed Raheim in the vehicle he sat in with a female friend by shooting him seven times, twice in the head. They also brutalized the young woman.

Instead of counselors, the city of Oakland and its school board employs armed guards to patrol children as young as 11-years-old. At a time when the school board is claiming to not even have enough money to keep schools like Marshall, Santa Fe, Lakeview, Lazear, and Maxwell open, they spend hundreds of thousands of dollars on school police. Just last year, Cole Middle School in West Oakland was closed down and now functions as a school police station.

The fact that there is a separate police department to deal with our children is an insidious abuse of power perpetrated by the school board.

Friday, July 6th, 11am, we will convene at Oakland Police Department headquarters on Broadway and 7th Streets and march to the school police office located at 1011 Union Street to demand JUSTICE FOR RAHEIM BROWN JR. AND AN END TO POLICING OUR KIDS!
§flyers!
by rebecca Tuesday Jul 3rd, 2012 1:43 PM 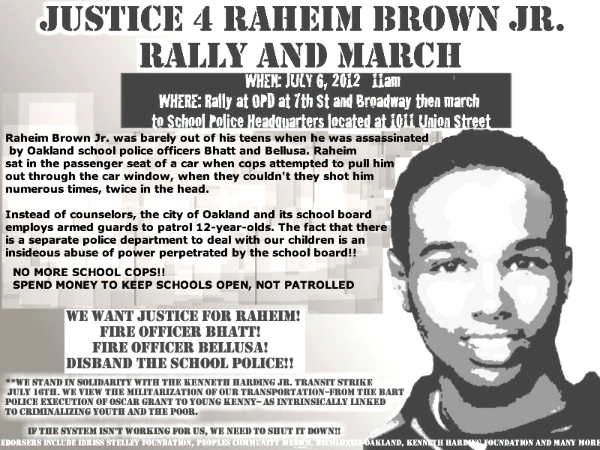