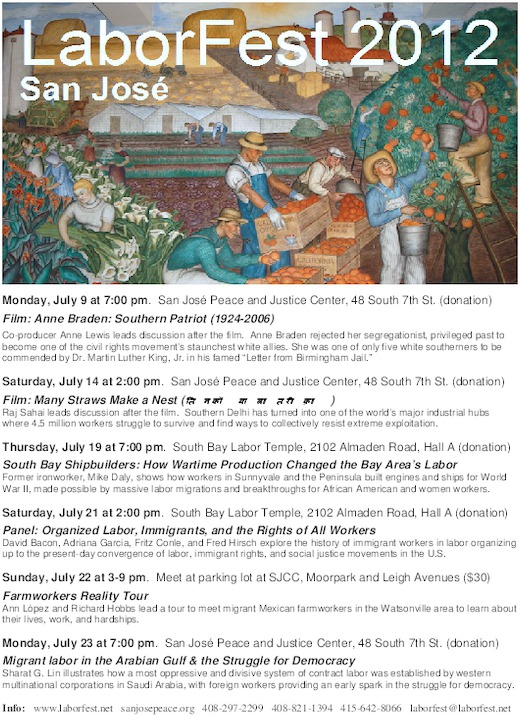 Co-producer Anne Lewis leads discussion after the film. Anne Braden rejected her segregationist, privileged past to become one of the civil rights movement’s staunchest white allies. She was one of only five white southerners to be commended by Dr. Martin Luther King, Jr. in his famed “Letter from Birmingham Jail.”

Raj Sahai leads discussion after the film. Southern Delhi has turned into one of the world’s major industrial hubs where 4.5 million workers struggle to survive and find ways to collectively resist extreme exploitation.

Former ironworker, Mike Daly, shows how workers in Sunnyvale and the Peninsula built engines and ships for World War II, made possible by massive labor migrations and breakthroughs for African American and women workers.

Panel: Organized Labor, Immigrants, and the Rights of All Workers

David Bacon, Adriana Garcia, Fritz Conle, and Fred Hirsch explore the history of immigrant workers in labor organizing up to the present-day convergence of labor, immigrant rights, and social justice movements in the U.S.

Ann López and Richard Hobbs lead a tour to meet migrant Mexican farmworkers in the Watsonville area to learn about their lives, work, and hardships.

Migrant labor in the Arabian Gulf & the Struggle for Democracy

Sharat G. Lin illustrates how a most oppressive and divisive system of contract labor was established by western multinational corporations in Saudi Arabia, with foreign workers providing an early spark in the struggle for democracy.

http://www.laborfest.net
Add Your Comments
Support Independent Media
We are 100% volunteer and depend on your participation to sustain our efforts!