by Robert Norse
Judge Paul Marigonda, notorious earlier in his career for trying to jail good activists with Food Not Bombs in San Francisco, and prosecutor of homeless people here in Santa Cruz as D.A., has ruled against an unusual Writ of Habeas Corpus filed by attorney Jonathan Gettleman, representing Linda Lemaster in one of the last of the PeaceCamp2010 cases. Lemaster may appeal or go directly to jury trial, facing a possible 6 months in jail and $1000 fine for sitting on the steps of the County Building with a sick activist and a sign suggesting that (homeless) Sleep is not a Crime. 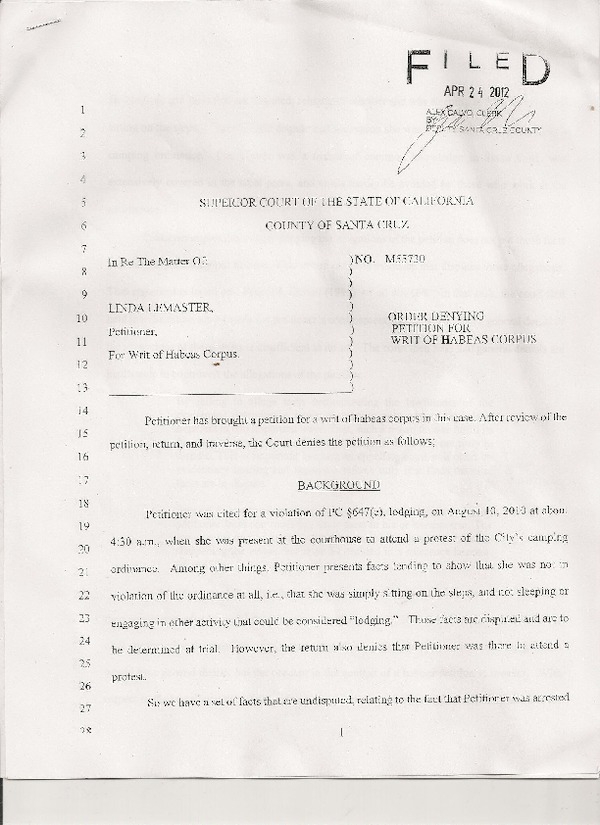 The earlier legal documents can found at http://www.indybay.org/newsitems/2012/02/16/18707485.php .
Related Categories: Santa Cruz Indymedia | Government & Elections | Health, Housing & Public Services | Police State & Prisons
Add Your Comments
Latest Comments
Listed below are the latest comments about this post.
These comments are submitted anonymously by website visitors.
TITLE
AUTHOR
DATE
Only laughed out of a Santa Cruz court by jackals
John E. Colby
John, read my previous post
Seriously
Read Gettleman's Writ of Habeas Corpus
John E. Colby
A Parallel Case
Becky Johnson (posted by Norse)
Ya got that right!!!
Fred
The rationalizations are embarassing
Seriously
Reality Check
Reality Check
"Confused" is confused
John E. Colby
Clearly unclear on the concepts.
G
You should read it again, John
Confused
Support Independent Media
We are 100% volunteer and depend on your participation to sustain our efforts!