by Dan Bacher
“While we appreciate the Brown administration’s support and the Fish and Game Commission effort to recognize tribal traditional harvesting rights, there is more that needs to be done in order to protect our culture and our resources for present and future generations,” said Yurok Tribal Chairman Thomas P. O’Rourke Sr. prior to the meeting. “We also have serious questions about the science, developed under the Schwarzenegger Administration, which the process relies upon. We believe it requires a truly impartial external review and revision in order to work for our region." 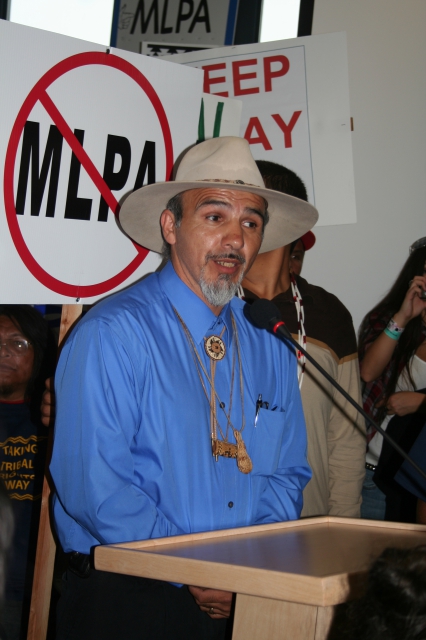 Before the California Fish and Game Commission voted to approve a network of so-called "marine protected areas" for the North Coast on June 6, the Yurok Tribe issued a statement outlining several serious concerns with the final proposal.

These included questions about the so-called "science" used under the Marine Life Protection Act (MLPA) Initiative to create the MPAs and concerns over the protection of tribal harvesting rights at Reading Rock and False Klamath.

In spite of moving testimony by Tribal Elders, Commissioners Michael Sutton, Richard Rogers and Jack Baylis voted 3 to 0 to approve new regulations covering state waters from the California/Oregon state line south to Alder Creek near Point Arena in Mendocino County that failed to address these concerns. Commissioners Jim Kellogg and Richard Rogers, both critics of the MLPA process, were absent.

“While we appreciate the Brown administration’s support and the Fish and Game Commission effort to recognize tribal traditional harvesting rights, there is more that needs to be done in order to protect our culture and our resources for present and future generations,” said Yurok Tribal Chairman Thomas P. O’Rourke Sr. prior to the meeting. “We also have serious questions about the science, developed under the Schwarzenegger Administration, which the process relies upon. We believe it requires a truly impartial external review and revision in order to work for our region."

“Today might mean the end of the discussion for some North Coast residents," O’Rourke continued. "For us, it’s the beginning of a conversation about how the State can better work with Native people to preserve and protect cultural and natural resources. The proposed project simply does not do enough to address tribal rights. The Yurok Tribe has and will continue to reserves all rights as a sovereign nation as we work towards finding a solution.”

For example, in a reversal of scientific logic, the MLPA provides for more regulation of highly abundant species such as mussels - and no harvest limits on fish such as the threatened Pacific eulachon.

“Under the MLPA each marine species is assigned a certain level of protection,” according to the Tribe's statement. “Species like mussels are given a low level of protection, which in MLPA-speak, translates to more regulation. To date, there has been no scientific data submitted suggesting that mussels on the North Coast are in any sort of danger or are overharvested. In fact, it’s just the opposite. The readily available quantitative survey data collected over decades by North Coast experts shows there is quite an abundance of mussels in this sparsely populated study region.”

The Tribe said species like Pacific eulachon, also known as candlefish, are given a high level of protection; or in other words, their harvest is not limited by the proposed regulations. Eulachon are near extinction and listed as "threatened" under the federal Endangered Species Act (ESA).

“Both of these marine species are essential and critical to the cultural survival of northern California tribes," said Chairman O’Rourke Sr. "However, under the proposed regulations they would be summarily mismanaged. It’s examples like these that compel our concerns.”

The Yurok Tribe said it has attempted on numerous occasions to address the scientific inadequacies with the MLPA science developed under the Schwarzenegger administration by adding "more robust protocols" into the equation, but was denied every time. This denial of consideration of the Tribe's scientific data flies in the face of false claims by MLPA advocates that the privately funded initiative creates "Yosemites of the Sea" and "underwater parks" based on "science."

For example, the MLPA Science Advisory Team, co-chaired by Ron LeValley of Mad River Biologists, in August 2010 turned down a request by the Yurok Tribe to make a presentation to the panel. Among other data, the Tribe was going to present data of test results from other marine reserves regarding mussels.

“The data would have shown that there was not a statistical difference in the diversity of species from the harvested and un-harvested areas,” wrote John Corbett, Yurok Tribe Senior Attorney, in a letter to the Science Advisory Team on January 12, 2011. “The presentation would have encompassed the work of Smith, J.R. Gong and RF Ambrose, 2008, ‘The Impacts of Human Visitation on Mussel Bed Communities along the California Coast: Are Regulatory Marine Reserves Effective in Protecting these Communities.’” (http://yubanet.com/california/Dan-Bacher-MLPA-Officials-refused-to-Include-Tribal-scientists-in-process.php)

No Tribal scientists were allowed to serve on the MLPA Science Advisory Team, in spite of the fact that the Yurok and other North Coast Indian Tribes have large natural resources and fisheries departments staffed with many fishery biologists and other scientists.

During the historic direct action protest by a coalition of over 50 Tribes and their allies in Fort Bragg on July 21, 2010, Frankie Joe Myers, Yurok Tribal member and Coastal Justice Coalition activist, exposed the refusal to incorporate Tribal science that underlies the questionable “science” of the MLPA process. (http://blogs.alternet.org/danbacher/2010/07/26/tribes-and-allies-take-control-of-fort-bragg-mlpa-meeting/)

Of the "marine protected area" options before the Fish and Game Commission on June 6, Yurok Tribal representatives supported the adoption of the following:

In the "Enhanced Compliance Alternative," the second proposal, there were two possible protected areas within Yurok ancestral territory near Reading Rock and False Klamath Rock.

At Reading Rock, there were two options before the Commission. The first, and preferred alternative, was an offshore State Marine Reserve (SMR) status that calls for zero human take of any marine species.

The second option was a State Marine Conservation Area (SMCA) designation, both on and offshore, which would allow some commercial and recreational harvest, while authorizing access to Tribal members with a valid Tribal ID card.

The proposal also called for a Seasonal Special Closure for False Klamath Rock. In this area there would be a 300-foot seasonal closure around the rock from March 1 to August 31 for avian nesting.

Inexplicably, the Commission failed to approve the Tribe's proposal that would protect traditional tribal gathering rights in Yurok ancestral territory. After the public comment period, the Commissioners rushed through the approval of Option 1, the preferred alternative, without even discussing the Tribe's recommended options.

During the hearing, Yurok Tribal leaders told the Commission they were unhappy with the regulations that would prohibit them from gathering seaweed, mussels and fish at their traditional gathering areas at Reading Rock and the False Klamath – and vowed to keep gathering regardless of the Commission’s decision.

“We are hunters, fishermen and gatherers and we have lived here since time immemorial,” said David Gensaw Sr. a member of the Yurok Tribal Council. “We have gathered on these shores forever since the Creator put us here.”

Gensaw told the Commission about the Tribe’s problems with diabetes, high blood pressure and other illnesses caused by a change in diet since the arrival of Europeans, who took many of the traditional foods from the tribe.

“We’re here today to tell you that we need that subsistence, and we will continue to provide our people with that nourishment,” he stated. “Hopefully, we can work this out without a confrontation.”

Yurok Tribal Elder Jack Matz emphasized, “If the regulations are implemented the way they are planned now, you will have a confrontation with a lot of elders, including myself.”

Nonetheless, Alicia T. McQuillen, Marine Resource Coordinator for the Yurok Tribe, noted after the Commission meeting that she is hopeful that the Tribe will be able to resolve its differences with the state of California over the MLPA process. She said she is encouraged by comments made by DFG Director Chuck Bonham that this was the beginning of a "new era" in the state's relationship with Tribes.

"We are hopeful that there will be a more positive and more open relationship between the state and Tribes - and more open and honest communication," McQuillen said. "We anticipate some disappointment over the results of the hearing, but it takes time to change hearts and minds."

Yurok people consider themselves to be "a vital part of the marine ecosystem." Yurok Tribal members have traditionally harvested marine resources for religious, ceremonial and subsistence use with carefully adapted methods that have maintained balanced abundance on the North Coast since time immemorial.

To read a copy of the Yurok Tribe MLPA and Marine Resource Plan, go to: http://www.yuroktribe.org/government/tribalattorney/documents/2011.08.29_YurokTribe-FactualRecordtoCAFGC.pdf.

The MLPA Initiative operated through a controversial private/public partnership funded by the shadowy Resources Legacy Fund Foundation. The Schwarzenegger administration, under intense criticism by grassroots environmentalists, fishermen and Tribal members, authorized the implementation of marine protected areas under the initiative through a Memorandum of Understanding (MOU) between the foundation and the California Department of Fish and Game (DFG).
Add Your Comments
Support Independent Media
We are 100% volunteer and depend on your participation to sustain our efforts!