by Dan Bacher
“Is it worth destroying the largest estuary on the Pacific Coast of the Americas to support .5% of the state’s GDP?" asked Barbara Barrigan-Parrilla, Executive Director of Restore the Delta. "How does it make sense to sacrifice prime Delta agriculture, which is roughly equivalent economically with Westlands, to perpetuate subsidized water for unsustainable farming on ill-suited lands?"

Photo of the Bechtel Conference Center courtesy of the PPIC.

“The Bechtel Conference Center is designed to serve as both a meeting place and a learning center for nonprofit organizations, highlighting the value that PPIC places on civic engagement, consensus-building, and respect for different perspectives,” according to the PPIC website (http://www.ppic.org.) “The center was made possible by a gift from the Stephen Bechtel Fund and opened in spring 2011. In its design and operation, the center reflects the values that PPIC and the Bechtel family place on environmental and technological innovation.” 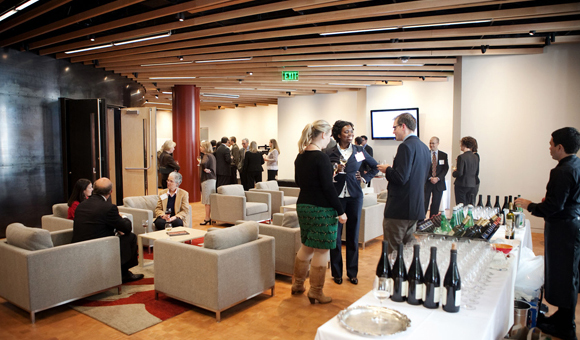 In a statement today, Restore the Delta (RTD) questioned the influence of the “special interest funding” of Public Policy Institute of California (PPIC) research supportive of the largest public works project in California history, the peripheral canal or tunnel – “a project the funder wants to build.”

“Restore the Delta is alerting all interested Californians to the connection between PPIC and their funders for their ongoing series of water reports: the Stephen Bechtel Foundation and Resources Legacy Fund Foundation,” said Barbara Barrigan-Parrilla, RTD Executive Director. “For four years, funders with financial or political self-interest have continued to direct the PPIC conversation.”

The peripheral canal or tunnel is designed export more Delta water to corporate agribusiness and Southern California water agencies, in spite of claims by canal advocates that the project would only ensure “water reliability.” The export of more water through a canal would hasten the extinction of Central Valley chinook salmon, Delta smelt, longfin smelt and other fish species.

“According to PPIC’s own findings, we are exporting 4/5 of Delta water to support .5% of the state’s GDP – huge corporate farms in the Westlands and Kern County water districts. PPIC researchers argue that agricultural values would increase with a ‘conveyance’ because these farmers will move toward more high-end permanent crops,” she stated.

Barrigan-Parrilla argued against the sacrifice of Delta farms and recreational and commercial fisheries to support only .5 percent of California’s Gross Domestic Project (GDP).

“Is it worth destroying the largest estuary on the Pacific Coast of the Americas to support .5% of the state’s GDP?" she asked. "How does it make sense to sacrifice prime Delta agriculture, which is roughly equivalent economically with Westlands, to perpetuate subsidized water for unsustainable farming on ill-suited lands?"

“Beyond losing Delta agriculture, the Peripheral Canal/Tunnel would grievously harm the California recreational and commercial fishing industry. Does it make sense for everyone else in the state to support a project that will subsidize .5% of the state’s GDP with close to 80% of the water?” said Barrigan-Parrilla.

However, she said RTD does agree with PPIC’s call for a cost-benefit analysis for a Peripheral Canal/Tunnel “to determine which strategy is best for the economy, the net costs of new conveyance need to be compared to the net costs of implementing alternatives with reduced exports.”

For my analysis of the PPIC report, go to: http://blogs.alternet.org/danbacher/2012/06/01/bechtel-foundation-funded-ppic-report-promotes-canal-construction.

For the complete PPIC report, “Water and the California economy,” go to: http://www.ppic.org/main/publication.asp?i=1015.

Stephen D. Bechtel, Jr., who ran the Bechtel Corporation for 30 years, is the chair of the S.D. Bechtel Jr. Foundation that funded “Water and the California economy” and previous PPIC reports promoting “new conveyance” as the solution to California’s water supply problems.

The Bechtel Corporation is a leading advocate throughout the world of the privatization of public water systems. It was Bechtel that sued the country of Bolivia for canceling a contract there sponsored by the World Bank.

A CorpWatch report, “Profiting from Destruction,” provides case studies from Bechtel’s history of operating in the water, nuclear, energy and public works sectors. These case studies reveal a legacy of unsustainable and destructive practices that have reaped permanent human, environmental and community devastation around the globe.

Letters from “Bechtel affected communities” included in the report provide first-hand descriptions of these impacts, from Bolivia to Native American lands in Nevada. The report reveals “a 100-year history spent capitalizing on the most brutal technologies, reaping immense profits and ignoring the social and environmental costs.” For more information, go to http://www.corpwatch.org/article.php?id=6975

Another CorpWatch report, http://www.corpwatch.org/article.php?id=6670, details “Bechtel’s Water Wars” in Bolivia. Fortunately, the people of Cochabama rebelled against Bechtel’s scheme to privatize their water system and won.

Hopefully, the people of California, like the people of Cochabama, will rise up against the plan by the Brown and Obama administrations to “save” the Delta by draining it.

It is worth noting that the shadowy Resources Legacy Fund Foundation, in addition to funding studies promoting the construction of the peripheral canal, also funded the controversial Marine Life Protection Act (MLPA) Initiative to create so-called “marine protected areas” on the California Coast.

Catherine Reheis-Boyd, President of the Western States Petroleum Association and a relentless advocate for offshore oil drillling, hydraulic fracturing (fracking), the Keystone XL Pipeline and the evisceration of environmental laws, chaired the MLPA Blue Ribbon Task Force that created the questionable “marine protected areas” that went into effect in Southern California waters on January 1, 2012. She also served on the task forces for the North Central Coast and North Coast.

These “marine protected areas” fail to protect the ocean from oil spills and drilling, pollution, military testing, corporate aquaculture, wind and wave energy projects and all other human impacts on the ocean other than fishing and gathering. The MLPA Initiative represents a classic case of privately-funded corporate greenwashing.