by Dan Bacher
“On the final day, the Angry People made their presence known with a thundering powerboat armada, smashing the tranquility of our event, and proving the Truth of our concerns for the safety of our ceremony participants,” said Caleen Sisk, Chief and Spiritual Leader of the Winnemem Wintu Tribe. 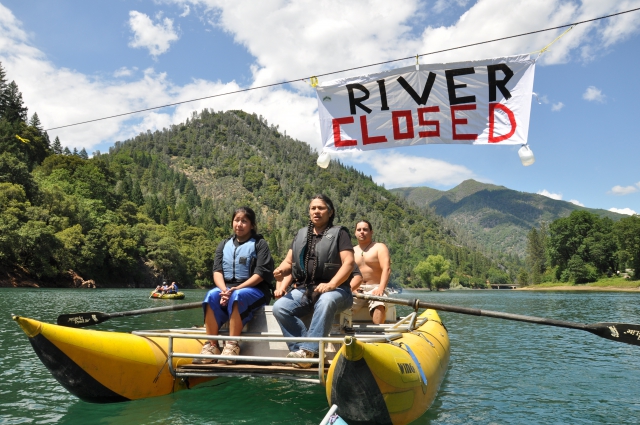 Winnemem Wintu Tribe members joined with members of other Indian Tribes and environmental activists in multi-colored kayaks and rafts to place a banner over the McCloud River on Lake Shasta proclaiming “River Closed" on Saturday, May 26.

The direct action took place in conjunction with the Tribes’s four-day War Dance (H’up Chonas in the Winnemem language) held from May 24 to May 27 at the site where they have held their Coming of Age ceremonies for thousands of years.

The War Dance signified the tribe’s spiritual commitment to defend at all costs the ceremony from heckling, flashing and other disruptions by recreational boaters that have occurred in previous years.

I arrived at the ceremony just as the banner was being strung up on a cable over the river. Members of the Winnemem, Karuk, Yurok, Hoopa Valley, Pit River, Miwok and other Tribes and activists from Earth First!, Klamath Justice Coalition, Klamath Riverkeeper, Occupy Oakland and the American Indian Movement worked together to erect the banner and to keep boaters from going up the river.

"Where have you been? We've been here for 10,000 years," quipped Gary Mulcahy, Winnemem Wintu leader and organizer of a previous War Dance at Shasta Dam in September 2004, when I arrived. "What took you so long?"

After the closure banner had been in place for over an hour, U.S. Forest Service and U.S. Coast Guard officials demanded that the banner be taken down. To avoid arrests, the Tribal members and activists complied with the request; this was a “practice run” for the upcoming Coming of Age ceremony.

“We have been backed into a corner with no other choice,” said Caleen Sisk, Winnemem Wintu spiritual leader and chief. “We should be preparing for Marisa’s ceremony, setting down prayers, making regalia, getting the dance grounds ready, making sure it happens in a good way. But instead we have to fight simply to protect our young women from drunken harassment.”

"We're not protesters - we're not good or skilled activists," noted Sisk. "We're a traditional tribe trying to hold a ceremony. We're thankful for the activists who have come here, some from big distances, to stay here in solidarity with us. This is a great thing."

At the end of the War Dance on the river on Sunday, there was a massive, apparently orchestrated disturbance that demonstrated the exact reason why a closure of the river to all boating traffic by the Forest Service is so badly needed.

A fleet of 10 boats and jet skis motored through the ceremony at high speeds, flipped off tribal members, did doughnuts near their sacred sites and generally tried to intimidate the teens, elders and young women who made up most of the people left, according to the Tribe.

“On the final day, the Angry People made their presence known with a thundering powerboat armada, smashing the tranquility of our event, and proving the Truth of our concerns for the safety of our ceremony participants,” said Caleen Sisk, Chief and Spiritual Leader of the Winnemem Wintu Tribe.

Supporters of the Tribe posed the question: What other religion would ever face that level of intimidation and fear for simply wanting to hold a spiritual ceremony in peace?

"There is not a very good faith effort on behalf of the Forest Service; they made us believe that the special use permit they said we needed was the process required to close the river. They're making it up as they go," she stated.

She said the Coming of Age Ceremony is chosen on a full moon to coincide with the last of the flowers blooming. It was traditionally conducted in the spring, but that it is not possible now because the high lake level now covers up Puberty Rock in the spring.

"The strongest peace is at the time of the full moon," she noted. "The moon regulates the tides and women's energy."

Sisk pointed to a spot in the river now under water as the sun began to set. "That's where Puberty Rock and the dance ground are," she said. "We are hoping that the rock and dance ground are out of the water by the time of the ceremony at the end of June."

This is not the first time that the Tribe has been forced to conduct a War Dance in recent years. In September 2004, the Tribe held a War Dance at Shasta Dam to protest the federal government's plan to rise the dam, a plan that would inundate Puberty Rock and other sites sacred to the Tribe.

The same federal government that is refusing to close the river for the ceremony is the same one that plans to raise Shasta Dam. "We've already been flooded out one time when Shasta Dam was built," said Sisk. "We won't be flooded again. If the dam is raised, Puberty Rock will be 25 feet under water."

Then in April 2009, the Tribe held a two-day War Dance on the banks of the American River in Sacramento to to bring attention to decades of injustice and destruction of their cultural sites by the federal government. Male dancers in traditional feathered headdresses, accompanied by female singers in white dresses, performed the ancient ceremony around a sacred fire to the steady beat of a wooden drum.

After that ceremony, Tribal leaders and their pro bono lawyers filed a lawsuit at the U.S. District Court for the Eastern District of Columbia. The suit against six federal agencies and two current federal agency heads alleged that their actions have resulted in the “destruction or damage” to the Tribe’s sacred cultural sites in Shasta County.

The Tribe was federally recognized until 1985 when a clerical error eliminated the Winnemem from the list of recognized Tribes.

The Tribe has played a leadership role in the battle to restore the Delta and stop the construction of the peripheral canal to export more water to corporate agribusiness and Southern California. The Tribe is now working on an ambitious plan to reintroduce winter run chinook salmon, now thriving in the Rakaira River in New Zealand, to the McCloud River above Shasta Dam.

Here is the video of Sunday's disturbance at the Winnemem's ceremony. Please share and take action for the rights of indigenous people to hold ceremony in peace and dignity: http://youtu.be/nW9WClzC5Og/

Please contact the US Forest Service, and anyone else you think could make a difference, to tell them to allow a closure of the river for their Coming of Age ceremonies:
Randy Moore, Regional Forester
707-562-8737
rmoore [at] fs.fed.us

For more information, go to the following links: