Add an Event
Newswire
Calendar
Features
Home
Donate
From the Open-Publishing Calendar
From the Open-Publishing Newswire
Indybay Feature
Publish to Newswire
Add an Event
Related Categories: California | Central Valley | Environment & Forest Defense | Government & Elections | Police State & Prisons | Racial Justice
Winnemem Wintu Tribe to Hold War Dance on McCloud River
by Winnemem Wintu Tribe
Monday May 21st, 2012 9:43 AM
“We have been backed into a corner with no other choice. We should be preparing for Marisa’s ceremony, setting down prayers, making regalia, getting the dance grounds ready, making sure it happens in a good way,” said Caleen Sisk, spiritual leader and chief. “But instead we have to fight simply to protect our young women from drunken harassment.”

Photo of Caleen Sisk (speaking) and members of the Winnemem Wintu Tribe at a protest at the U.S. Forest Service office in Vallejo on April 16 by Dan Bacher. 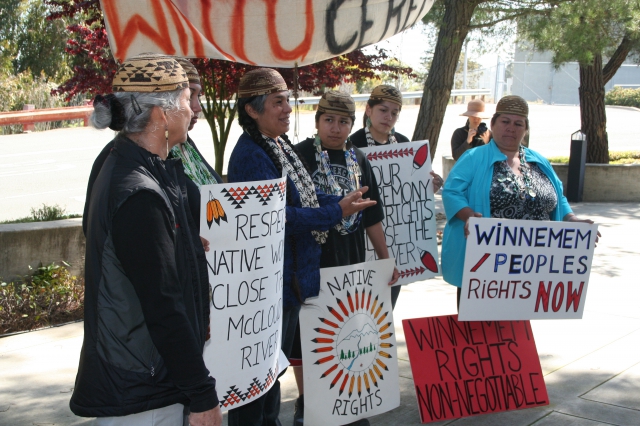 Winnemem Wintu Tribe to Hold War Dance May 24-27 to Convince U.S. Forest Service to Protect Coming of Age Ceremony from Disruptions and Heckling

Redding, CA – The Winnemem Wintu Tribe will hold a four-day War Dance (H’up Chonas in Winnemem) May 24-27 at the McCloud River site where they hold their Coming of Age ceremonies.

The War Dance signifies the tribe’s spiritual commitment to defend at all costs the ceremony from heckling, flashing and violating disruptions by recreational boaters that have occurred in previous years.

“We have been backed into a corner with no other choice. We should be preparing for Marisa’s ceremony, setting down prayers, making regalia, getting the dance grounds ready, making sure it happens in a good way,” said Caleen Sisk, spiritual leader and chief. “But instead we have to fight simply to protect our young women from drunken harassment.”

More than 400 volunteers from throughout the country, native and non-native, are expected to converge upon the sacred sites to help the tribe close the river and protect the War Dance from interference by boaters.

The ceremony will begin Thursday with the light of the sacred fire and an opening dance. On Friday and Saturday, the Tribe and volunteers will blockade a 400-yard stretch of the river. These will be the best days for media to attend.

“We hope the blockade will let the Forest Service know that boats don’t belong in ceremony and that we will do it ourselves if they won’t take the appropriate measures to protect our young women’s ceremonies,” said Sisk.

The tribe has contacted the U.S. Forest Service to arrange a discussion with officials to let them know what to expect and to ensure that everyone will be safe and have their rights respected. The tribe will have lawyers, legal observers, videographers, and the media present at all times during the War Dance and other activities.

The Tribe hopes the War Dance will convince the U.S. Forest Service to implement a mandatory river closure for 16-year-old Marisa Sisk’s Coming of Age ceremony, a traditional rite that is vital to the tribe’s social fabric.

The ceremony lasts four days, and takes place at the McCloud Bridge campground, which is within the Shasta-Trinity National Forest. The site was once a Winnemem village, Kaibai, and is home to numerous sacred sites vital to the ceremony.

At the tribe’s ceremonies in 2006 and 2010, the Forest Service enforced only a voluntary river closure, which led to drunken recreational boaters heckling the young Winnemem women and other tribal members with shouts of “It’s our river too, dude!” or “Fat Indians.”

One woman flashed her naked breasts at the Tribe, and another boater dumped cremated ashes into the river shortly before a ceremonial swim.

For six years, the tribe has unsuccessfully worked with Shasta-Trinity Forest officials to secure a mandatory closure of the 400 yards river necessary for the ceremony. It is not a thoroughfare. Access for the general public dead-ends at the north end of the site, which is private property.

On April 16, the Winnemem Wintu held a direct action event at the Vallejo office of Regional Forester Randy Moore, asking him to take action and close the river using his professional discretion. The tribe gave Moore a May 1 deadline to respond to their request, but he has never contacted the tribe.

U.S. Forest Service officials say that laws that would allow for a mandatory river closure for American Indian ceremonies – the 2008 Farm Bill and the American Indian Religious Freedom Act – do not apply to the Winnemem because they are not federally recognized.

The Winnemem were federally recognized up until the 1980s when they lost recognition due to Bureau of Indian Affairs clerical error.

The Winnemem Wintu are a traditional tribe of 125 who still practices their ceremonies and traditional healings within our ancestral territory from Mt. Shasta down the McCloud River watershed. When the Shasta Dam was constructed during World War II, it flooded their home and blocked the salmon runs. It also flooded all the other Puberty Rocks that could be used for Coming of Age ceremonies.

For directions to the War Dance, a cultural guide for the ceremony and more info, visit http://www.saveourceremony.com/wardance.

Learn more about the Winnemem Wintu at http://www.winnememwintu.us/

Learn more about the ceremony at http://www.saveourceremony.com.

Download Video of motorboats speeding past ceremony and flashing the participants at: http://vimeo.com/39867112