Add an Event
Newswire
Calendar
Features
Home
Donate
From the Open-Publishing Calendar
From the Open-Publishing Newswire
Indybay Feature
Publish to Newswire
Add an Event
Related Categories: Santa Cruz Indymedia | Global Justice & Anti-Capitalism | Media Activism & Independent Media | Police State & Prisons
Highway One Banner Displays Supporting the Santa Cruz Eleven Continue
by Alex Darocy (alex [at] alexdarocy.com)
Friday May 18th, 2012 6:56 PM
On May 18, supporters of the Santa Cruz Eleven held banners on the Soquel Avenue bridge, to be seen by passing drivers on Highway 1, in support of the eleven people charged in association with the 2011 occupation of a vacant bank building at 75 River Street in Santa Cruz. So far six of the eleven defendants have had charges against them dismissed by Santa Cruz judge Paul Burdick, and the remaining five are still in the middle of pre-trial hearings. Community members also displayed banners on Tuesday of this week on the La Fonda Avenue bridge. 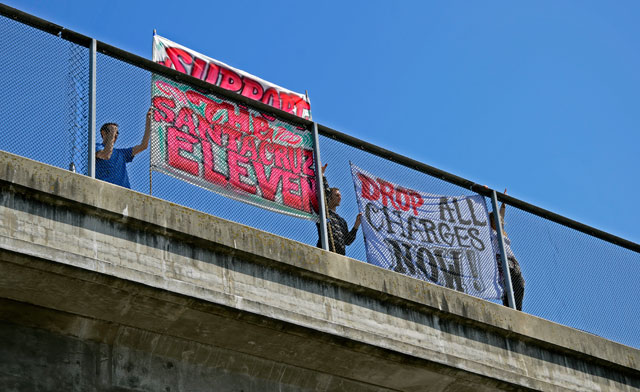 From the Santa Cruz Eleven website:
"The Santa Cruz Eleven are local community members who have been charged with an unprecedented variety of offenses arising from their alleged involvement with the occupation of a long-time vacant bank building late last fall, 2011. These defendants are either journalists, members of our local press, and/or activists supportive of the Occupy movement."

For more information about the Santa Cruz Eleven, see:
http://santacruzeleven.org/

I also am one of the 11 defendants who was charged, but the charges against me were dismissed by Judge Paul Burdick on Monday. I did not have anything to do with the organization or planning of this banner display, or the Santa Cruz Eleven website.
§
by Alex Darocy Friday May 18th, 2012 6:56 PM 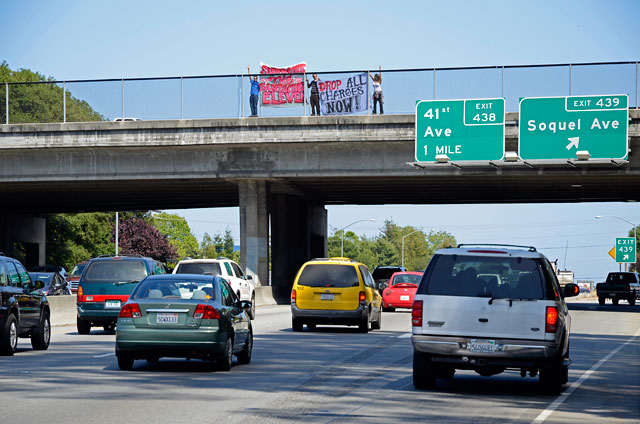 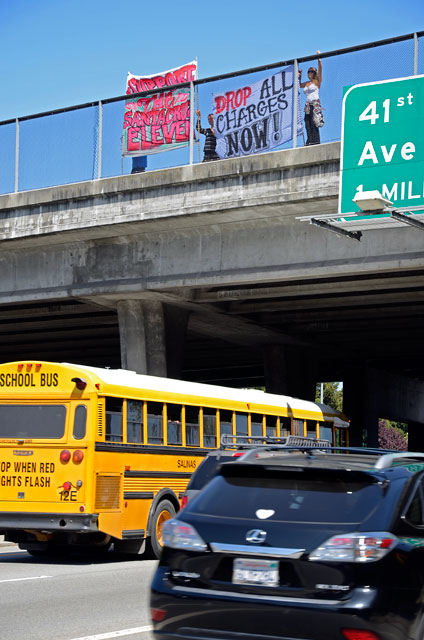