by International Coalition to Free the Angola 3
We have just released a new flyer providing the latest updates about the Angola 3, to be used as an organizing resource. The case is heating up with a recent Amnesty International petition and an upcoming May 29 court date for Albert Woodfox. Please help to spread the word. 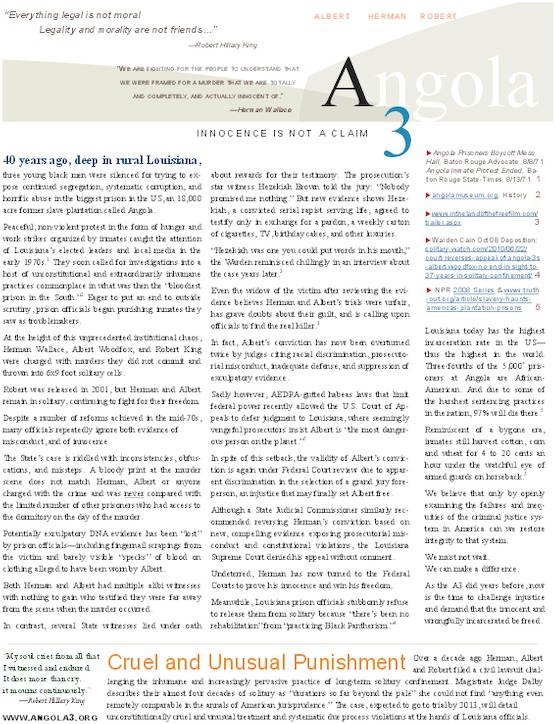 The Case of the Angola 3

40 years ago, deep in rural Louisiana, three young black men were silenced for trying to expose continued segregation, systematic corruption, and horrific abuse in the biggest prison in the US, an 18,000 acre former slave plantation called Angola.

Peaceful, non-violent protest in the form of hunger and work strikes organized by inmates caught the attention of Louisiana’s elected leaders and local media in the early 1970s. They soon called for investigations into a host of unconstitutional and extraordinarily inhumane practices commonplace in what was then the “bloodiest prison in the South.” Eager to put an end to outside scrutiny, prison officials began punishing inmates they saw as troublemakers.

At the height of this unprecedented institutional chaos, Herman Wallace, Albert Woodfox, and Robert King were charged with murders they did not commit and thrown into 6x9 foot solitary cells.

Robert was released in 2001, but Herman and Albert remain in solitary, continuing to fight for their freedom.

Despite a number of reforms achieved in the mid-70s, many officials repeatedly ignore both evidence of misconduct, and of innocence.

The State’s case is riddled with inconsistencies, obfuscations, and missteps. A bloody print at the murder scene does not match Herman, Albert or anyone charged with the crime and was never compared with the limited number of other prisoners who had access to the dormitory on the day of the murder.

Potentially exculpatory DNA evidence has been “lost” by prison officials—including fingernail scrapings from the victim and barely visible “specks” of blood on clothing alleged to have been worn by Albert.

Both Herman and Albert had multiple alibi witnesses with nothing to gain who testified they were far away from the scene when the murder occurred.

In contrast, several State witnesses lied under oath about rewards for their testimony. The prosecution’s star witness Hezekiah Brown told the jury: “Nobody promised me nothing.” But new evidence shows Hezekiah, a convicted serial rapist serving life, agreed to testify only in exchange for a pardon, a weekly carton of cigarettes, TV, birthday cakes, and other luxuries.

“Hezekiah was one you could put words in his mouth,” the Warden reminisced chillingly in an interview about the case years later.

Even the widow of the victim after reviewing the evidence believes Herman and Albert’s trials were unfair, has grave doubts about their guilt, and is calling upon officials to find the real killer.

Sadly however, AEDPA-gutted habeas protections that limit federal power recently allowed the U.S. Court of Appeals to defer judgment to Louisiana, where seemingly vengeful prosecutors insist Albert is “the most dangerous person on the planet.”

In spite of this setback, the validity of Albert's conviction is again under review due to apparent discrimination in the selection of a grand jury foreperson, an injustice that may finally set Albert free.

Undeterred, Herman has now turned to the Federal Courts to prove his innocence and win his freedom.

Meanwhile, Louisiana prison officials stubbornly refuse to release them from solitary because “there’s been no rehabilitation” from “practicing Black Pantherism.”

Over a decade ago Herman, Albert and Robert filed a civil lawsuit challenging the inhumane and increasingly pervasive practice of long-term solitary confinement. Magistrate Judge Dalby describes their almost four decades of solitary as “durations so far beyond the pale” she could not find “anything even remotely comparable in the annals of American jurisprudence.” The case, expected to go to trial by 2013, will detail unconstitutionally cruel and unusual treatment and systematic due process violations at the hands of Louisiana officials.

We believe that only by openly examining the failures and inequities of the criminal justice system in America can we restore integrity to that system.

We must not wait.

We can make a difference.

As the A3 did years before, now is the time to challenge injustice and demand that the innocent and wrongfully incarcerated be freed. 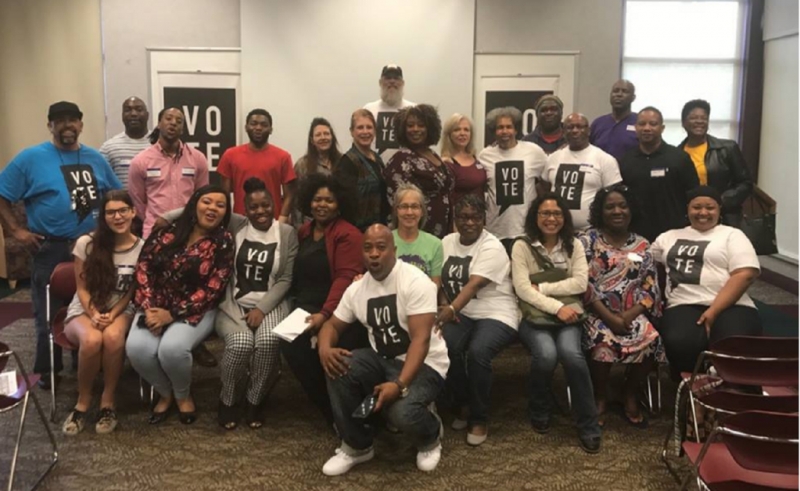 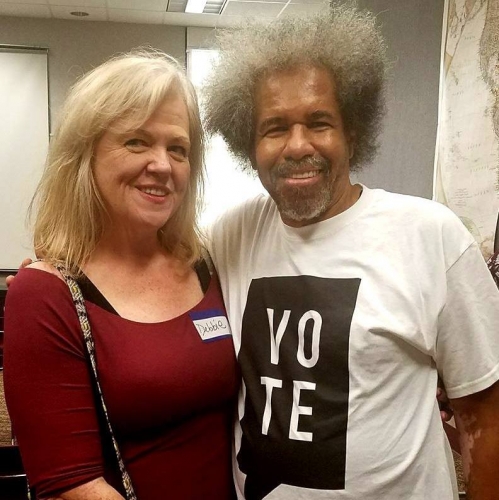 original image (792x792)
Albert with Deborah Allen at VOTE-Shreveport event on Oct 21, 2017
Add Your Comments
Support Independent Media
We are 100% volunteer and depend on your participation to sustain our efforts!