Add an Event
Newswire
Calendar
Features
Home
Donate
From the Open-Publishing Calendar
From the Open-Publishing Newswire
Indybay Feature
Publish to Newswire
Add an Event
Related Categories: Santa Cruz Indymedia | Global Justice & Anti-Capitalism | Police State & Prisons
Dismissal Hearing Postponed Until Monday; Updates on SC-11
by Robert Norse
Friday May 11th, 2012 7:30 PM
The two fliers below were distributed at the "Save the Eleven for the Eleventh" Rally which made over $300 for the defendants. Thanks to all who came. This may become a regular event on the 11th of every month. We also received new endorsements from City on a Hill Press and the SF Coalition on Homelessness. 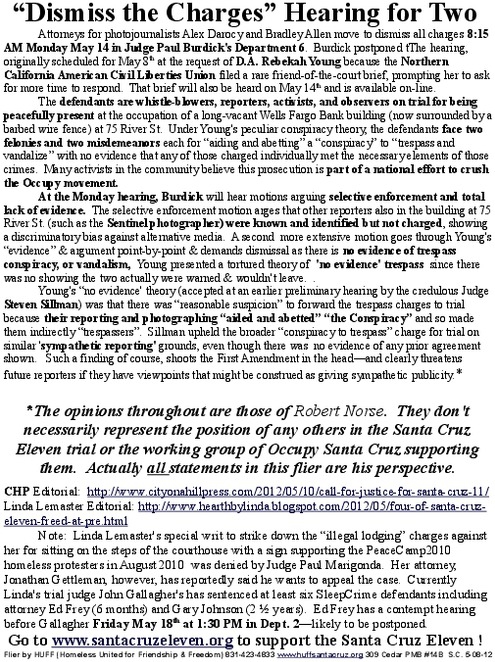 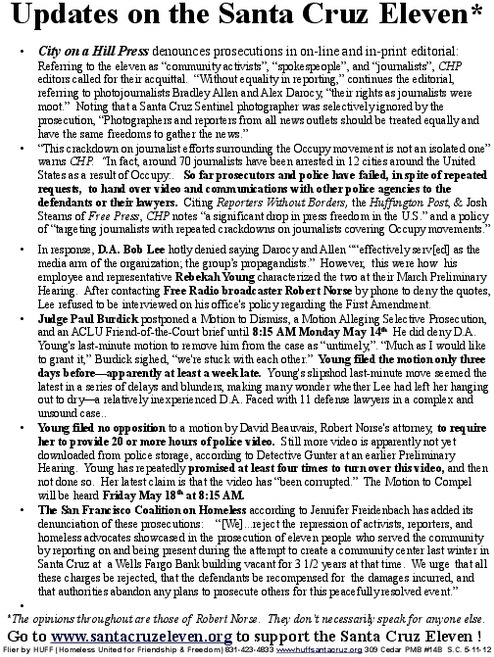 Download PDF (113.8KB)
City on a Hill editors agreed to retract the quote inaccurately attributed to D.A. Bob Lee. But, Lee has not repudiated his prosecutor Rebekah Young, who is fairly closely quoted via indybay. It is telling that Lee reacted so sharply to a characterization that does describe (in somewhat buckshot fashion) his own D.A.'s theory of the case (sympathetic media can be imprisoned for viewpoint while establishment media can be ignored).
Add Your Comments

§What evidence of Alex Darocy and Bradley Stuart Allen being propagandists for Occupation
by John Colby
Friday May 11th, 2012 8:48 PM
Santa Cruz DA Bob Lee accuses Alex Darocy and Bradley Stuart Allen of being the media arm of the 75 River Street Occupation, of being their media propagandists. However no credible evidence to support this allegation has been presented.

Nazis were tried as media propagandists in the Nuremberg trials. Is DA Bob Lee comparing Alex Darocy and Bradley Stuart Allen to these Nazis?

It has come to light that the U.S. military ran an operation to spread pro–American propaganda via fake online identities. Have any U.S. military personnel been prosecuted for this?

The mainstream media routinely acts as media propagandists for the U.S. government. Why haven't they been charged with war crimes?

DA Bob Lee's hand is empty. Why is he trying to bluff both the judiciary and the public?
Add a Comment
§SC11 now the SC5?
by G
Monday May 14th, 2012 9:59 AM
Apparently the charges against Bradley Stuart Allen and Alex Darocy were dismissed this morning. With Burdick waving away 4 cases last month, there are 5 persecuted remaining. The charges against Becky Johnson are absurd, so it seems likely that the 11 will be reduced to the 4, if not less, and soon.

Will Santa Cruz County misuse and abuse of the law ever end?

Fire Bob Lee!
http://peacecamp2010insider.blogspot.com/
Add a Comment
Support Independent Media
We are 100% volunteer and depend on your participation to sustain our efforts!