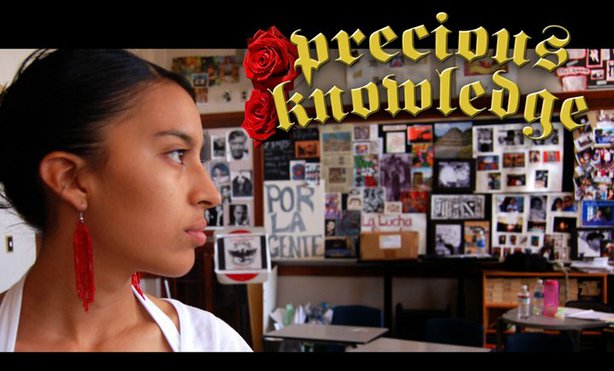 Sean Arce, the head of the Tucson school district’s banned Mexican American Studies program, was dismissed from his job. Tucson’s Mexican American Studies program has been under attack following the passage of a bill which prohibits schools from offering ethnic studies courses. Arce maintains he was fired because he spoke out against what he saw as a discriminatory law targeting Mexican Americans and Latinos. "I, along with many others, stood up and [saw] this law as unconstitutional," Arce says. "And because we stood up, the district has retaliated." He is now being sued in a $1 million defamation lawsuit (see his statement below)

He is the recipient of the 2012 Myles Horton Education Award for Teaching People’s History from the Zinn Education Project.
This event is a fundraiser for legal fees.

Special thanks to the Darling House Bed and Breakfast!!
http://darlinghouse.com/


Here are some articles about Sean's situation:


May 1, 2012- STATEMENT FROM SEAN ARCE....Because of the fact that my Carnal Jose Gonzalez and I are being sued for $1 million by the aide (John Ward) of AZ Attorney General Tom Horne for "supposed" slander/libel, we are in dire need of fundraising for our defense fund.

This is further evidence that the State of Arizona is out to personally destroy us in TUSD's Mexican American/Raza Studies. Ward's attorneys, funded by the racist Tea Party/Republican Party and AZ Attorney General Tom Horne (who is leading Ward's fundraising efforts) will be deposing us this month. Jose and I need feria to depose Ward, Horne et al. in order to adequately defend ourselves. Unfortunately, a Pima County Judge has allowed this frivolous case to proceed, another example of the anti-Mexican sentiment that is so pervasive in AZ.

Please view the following link on the Precious Knowledge documentary movie trailer (http://vimeo.com/15062646) at the 1 minute 10 second mark, wherein John Ward with current Arizona State Attorney General Tom Horne (the originator of the anti-Mexican American Studies bill HB 2281 which is now §ARS 15-111 and § ARS 15-112) standing directly behind him. In this trailer Ward defames and demonizes the TUSD Mexican American Studies Department personnel, to include Jose Gonzalez and myself, by stating that “The program (TUSD’s Mexican American Studies Department) is administered by vehemently anti-American zealots.” This language towards Jose Gonzalez and myself is nothing short of a political witch hunt set out to destroy our
professional and personal lives.

Jose and I have been fired by our District for standing up to this racist law and now the State of AZ is attacking us and our familias....END
Added to the calendar on Sun, May 6, 2012 4:31PM
Add Your Comments
Support Independent Media
We are 100% volunteer and depend on your participation to sustain our efforts!