Adams notes Murphy has refused to communicate with him, been unheloful if not hostile in his case, & declined to meet or share evidence with him as requested.

Most recently, Adams says, Murphy stood him up for a Friday court appearance that he promised to schedule so that Adams could get a new attorney. In spite of a prior promise, according to Adams, Murphy high-handedly broke his word without apology and darkly suggested that Adams would have to represent himself and have trouble finding another attorney.

I've often seen this ailment among Public Defenders, eager to plea bargain their clients' cases, supremely confident they know best what is to be done, and uninterested in sharing their case with the client. This "five minutes in the hallway before trial" sickness is a severe one, partially the fault, of course, of Public Defenders being overburdened by the system.

Court appointed Public Defenders (or "Public Pretenders" as some are called by their victims) for many of the SC-11 have generally declined to file any pre-trial motions challenging the rushed prosecution, the prosecution's failure to provide full video and written evidence, and not gotten together with other attorneys to work out a common strategy.

In my opinion, were the SC11 to have followed their attorney's advice strictly, none of them would ever have met and talked together as some have done to plan solidarity benefits and actions. Nor would they have conferred with supporters.

Perhaps this is because the attorneys recognize how stupid these charges are compared with murder, rape, and robbery felonies that may also be involved with. Still, these charges are very serious not only for those falsely under the gavel

Adams welcomes supporters at the hearing, but encourages folks not to burn themselves out, given the number of recent and upcoming events involving members of the SC11.

If others have any complaints about ineffective support of counsel through negligence or intent, please let me know at rnorse3 [at] hotmail.com
END_OF_DOCUMENT_TOKEN_TO_BE_REPLACED
Added to the calendar on Sun, May 6, 2012 1:34PM
§Clarification
by Robert Norse
These opinions are mine alone and do not seek to represent those of the SC-11 nor the supporters of the SC-11.
§Flier
by Robert Norse 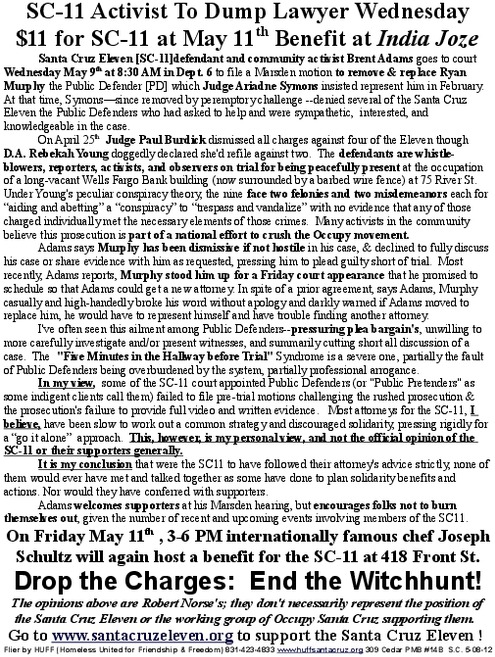 Download PDF (103.0KB)
Please download and distribute
Add Your Comments
Latest Comments
Listed below are the latest comments about this post.
These comments are submitted anonymously by website visitors.
TITLE
AUTHOR
DATE
Lawyer "dump" fails
Roosta
McJustice (the Mc is silent).
G
Support Independent Media
We are 100% volunteer and depend on your participation to sustain our efforts!