Occupy Your Civil Liberties on May Day! 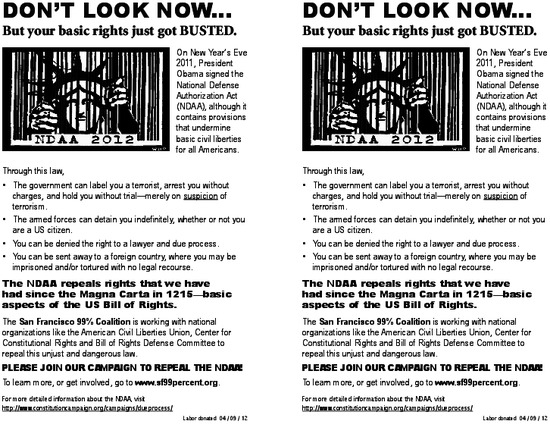 As a part of the Bay Area 2012 May Day actions on Tuesday, May 1, at 10:30 am, San Francisco progressive activists from around the Bay Area will gather at San Francisco's UN Plaza to celebrate human rights and raise awareness about the National Defense Authorization Act (NDAA), a law that consolidates a decade-long slide in civil liberties here in the United States.

President Obama signed the NDAA into law on December 31, 2011. It contains provisions that could allow indefinite detention and arbitrary military detention, without trial or day in court, of anyone accused of any "belligerent act" or terror-related offense--including "material support" allegations based strictly on speech or association. It essentially subjects everyone within the US (including citizens, legal residents, and visitors) to the same lawless standards at work in Guantanamo Bay.

In response, cities all over the United States have passed local resolutions of non-compliance, including at least two Bay Area cities: Fairfax and Santa Cruz. And another resolution is being proposed for passage in San Francisco by the San Francisco 99% Coalition.

The program will include speeches, folks songs, poetry and a public reading of selected excerpts from the Universal Declaration of Human Rights.

WHO: Civil liberties advocates from the San Francisco 99% Coalition and Bay Area allies

WHAT: Speak out against NDAA and for civil liberties

WHERE: UN Plaza, Market, between 7th and 8th Streets


END_OF_DOCUMENT_TOKEN_TO_BE_REPLACED
Added to the calendar on Mon, Apr 30, 2012 3:44PM
Add Your Comments
Support Independent Media
We are 100% volunteer and depend on your participation to sustain our efforts!