§Isaac is out
by bubbadrumz Tuesday Apr 24th, 2012 5:04 PM
A person close to Isaac said he was not in jail yesterday.
§Jail Confirms: They don't Have Isaac
by Robert Norse Tuesday Apr 24th, 2012 7:16 PM
Just phoned the jail, and the previous comment is correct: Isaac, according to the jail, isn't there. This probably means he went to court this morning and was released. I relied on information given me by a jail deputy this weekend. Sorry for any confusion. Glad that Isaac is out!

I'll be down at the HUFF meeting at 9 AM in the cafeteria in the basement of the County building as mentioned above. Free coffee for those who show.
§Booboo #2
by Robert Norse Tuesday Apr 24th, 2012 8:15 PM
Another error. The Pitchess motion mentioned above was already decided last week--denying the defense access to individuals who might challenge Officer Winston's credibility.

A Superior Court clerk today told me that there's be a disposition of that motion tomorrow (Wednesday 4-25 at 10 AM). Judge Burdick denied the motion "without prejudice", meaning, I guess, that it can be reintroduced after the Preliminary Examination.

Incidentally for those interested in hearing interviews of those who found Winston's behavior abusive, go to http://www.huffsantacruz.org/brb-descriptions.html and search for "Winston". Then download the show and find the segment where a witness talks about Winston.
§Ed Frey's Contempt Hearing Has Been Postponed
by Robert Norse Thursday Apr 26th, 2012 6:27 AM
To May 18 at 1:30 PM in Dept. 2 See "Dressed Down Attorney to be Dressed Down in May" at http://www.indybay.org/newsitems/2012/04/25/18712105.php .
Add Your Comments 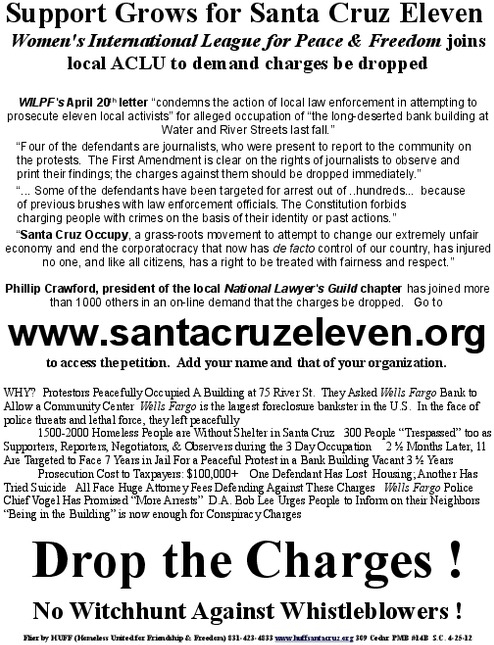 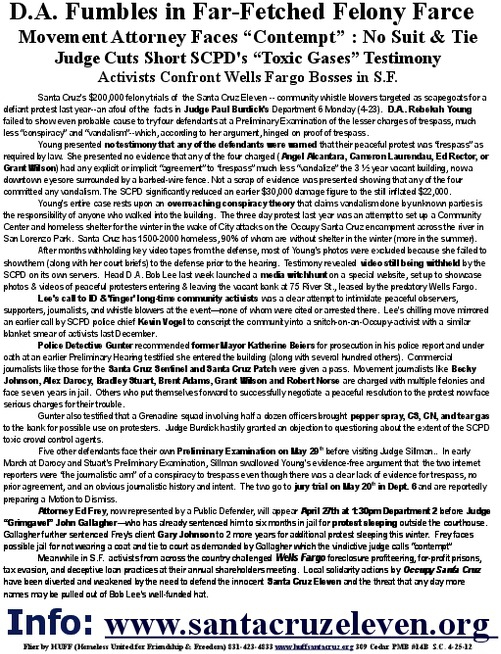 Support Ed Frey Friday April 27th at 1:30 PM in Dept. 2. Frey has been a tireless defender of homeless activists and Occupy Santa Cruz. At the risk of his own security, property, and liberty, Frey has put himself on the line as no other local attorney has. Join HUFF (Homeless United for Friendship) in front of the courthouse at 1:15 p.m. Free coffee as long as it lasts.
Add a Comment
§Saw Issac at the Drum Circle today
by RazerRay
Wednesday Apr 25th, 2012 7:31 PM
He looked well.
http://auntieimperial.tumblr.com/
Add a Comment
Support Independent Media
We are 100% volunteer and depend on your participation to sustain our efforts!