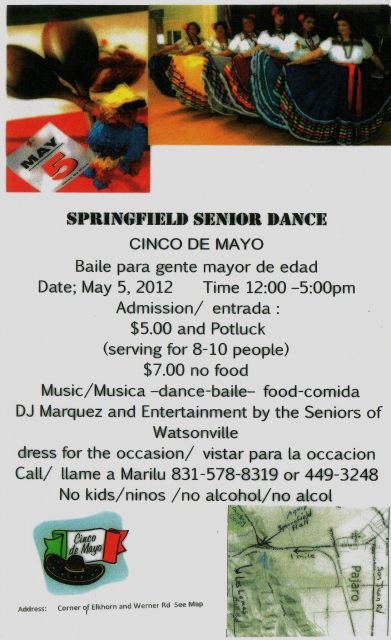 Senior Dance! Entrance: $5 plus a shared dish (pot-luck style for 8-10 people), without the dish, $7 entrance
No kids, no alcohol.

The Springfield Grange, an 80-year old institution on the corner of Werner and Elkhorn Roads in North Monterey County, remained inactive for the last several years, following decades serving as a social and political hub for farmers in our region. Since swearing in 65 new members in 2011, the Springfield Grange is one of the fastest growing Grange Halls in the country. The new President of the Springfield Grange, Alan Hicks, feels that this growth is due to the rising interest in sustainable agriculture, quality food, farmers markets, and a desire for a place for community building and a space for activities.

The National Grange Movement started in 1867 to represent the interests of small farmers and remains a repository for rural values, traditions and knowledge. Due to renewed interest in sustainable agricultural practices and small farming livelihoods, the Grange Movement has been growing, especially in California, for the first time in over 30 years.

Hicks envisions Grange participation in the development of a farm stand at the busy intersection where local farmers can sell their organic produce and artisans, their crafts. He wants to appeal to farmers as well as field workers. Events ranging from pancake breakfasts to Mexican barbacoas are in the works as well. The goal is also to provide a space for youth of diverse cultures and ethnic backgrounds to have safe, healthy, educational activities that support community cooperation.

Local and state elected officials such as, Watsonville Mayor Eduardo Montesino, Watsonville City Councilman Lowell Hurst, and State Assembly members Bill Monning and Luis Alejo are supporting the revitalization effort by becoming Springfield Grange members themselves. "This is about community empowerment, community organization, and folks coming together to bond and solve neighborhood problems, to provide some fellowship and some opportunities to learn and teach future generations," Watsonville City Councilman Hurst said in a recent article in the Santa Cruz Sentinel.
Added to the calendar on Mon, Apr 23, 2012 3:19PM
Add Your Comments
Support Independent Media
We are 100% volunteer and depend on your participation to sustain our efforts!