by Occupy the Bridge
Golden Gate Bridge, Bus, and Ferry Workers Prepare for Possible May Day Strike to Protect Good Jobs and Healthcare 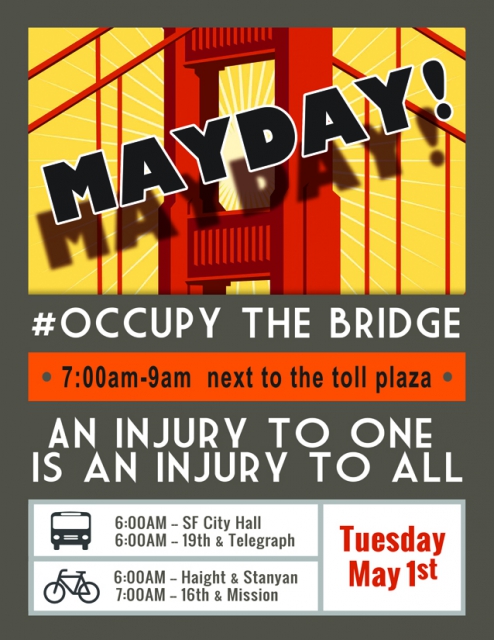 “We are prepared to continue the fight for affordable quality healthcare for workers, families, and retirees and good jobs for the 99%. Healthcare is something that affects everyone, and working class families are the hardest hit. We welcome support for our May 1st action from the public, our brothers and sisters in labor, and groups like Jobs with Justice, Pride at Work, and Occupy San Francisco” said Joan Wyman, Customer Relations Assistant at the Golden Gate Bridge District and member of Teamsters Local 856.

Workers have been in negotiations with Golden Gate Bridge District management since April 2011. There have been over 45 bargaining sessions to date and the current contract expired in July 2011. The Labor Coalition has offered concessions worth an estimated $2 million each year. Although Golden Gate Bridge District management has acknowledged that the financial needs of the district have been met, they are still seeking to push the cost of healthcare onto workers and their families.

Over the past decade, employers across the country have been pushing an increasing portion of rising healthcare costs onto workers. According to the Kaiser Family Foundation workers paid 47% more for family health coverage in 2010 than in 2005, while their wages only increased 18%. Employers paid only 20% more toward workers’ health insurance during this same period.

“For too long bosses have used divide and conquer tactics to attack workers," said Lisa Maldonado, Executive Director of the North Bay Labor Council. "This May Day, the 99% will stand together and send a message to 1% millionaires like Golden Gate District Board President Janet Reilly: hands off our jobs and healthcare."

The Golden Gate Labor Coalition is calling for a mass rally and action at the bridge at 7am on May 1. Bridge, bus, and ferry workers will be reaching out directly to commuters this week to notify them of possible disruptions to their commute and ask for their support.