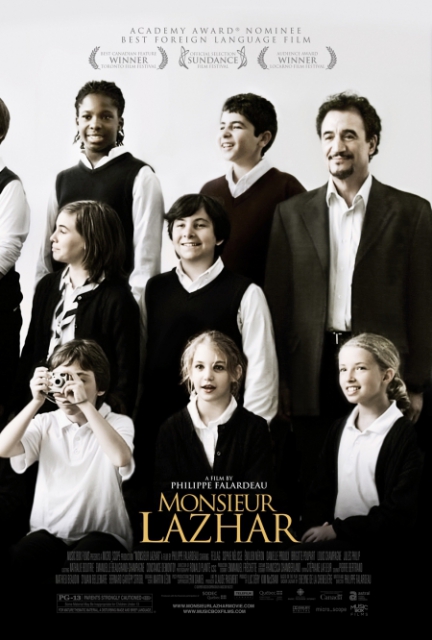 Philippe Falardeau’s poignant social drama MONSIEUR LAZHAR, one of the five nominees for the 2012 Academy Award for Best Foreign Language Film, tells the story of an Algerian immigrant substitute teacher who brings emotional stability to a Montreal middle school class shaken by the death of their well-liked teacher. After learning of the death of an elementary school teacher, Bachir Lazhar (Fellag), a 55-year-old Algerian immigrant, goes to the school to offer his services as a substitute teacher. Quickly hired to replace the deceased, he finds himself thrown in an establishment in crisis, while going through his own personal tragedy. The film features exquisite performances by Fellag and the child actors playing Monsieur Lazhar’s young students coping with grief and learning to heal.

Award-winning writer-director Philippe Falardeau’s previous works - including Congorama and It’s Not Me I Swear! - have been screened at festivals around the world including Cannes, Toronto, New Directors/New Films, Berlin and Locarno. MONSIEUR LAZHAR, his fourth feature, is an adaptation of the play “Bashir Lazhar” by Montreal playwright Evelyne de la Cheneliere. Best known in France for his stand up comedy, lead actor Bachir Fellag was born and raised in Algeria and worked extensively in theater until 1995 when he moved to Paris during the Algerian Civil War. In addition to his acting career, Fellag has written three short story collections and two novels.
http://www.monsieurlazharmovie.com/
http://www.musicboxfilms.com/monsieur-lazhar

“This nearly perfect gem begins as a tiny slice of life, but sneaks up on you and packs a wallop by the time it reaches its conclusion… the film achieves scalding power” – Stephen Farber, The Hollywood Reporter

The film’s running time is 94 minutes; it is rated PG-13. In French; fully subtitled in English.
END_OF_DOCUMENT_TOKEN_TO_BE_REPLACED
Added to the calendar on Wed, Apr 11, 2012 11:28AM
Add Your Comments
Support Independent Media
We are 100% volunteer and depend on your participation to sustain our efforts!