Add an Event
Newswire
Calendar
Features
Home
Donate
From the Open-Publishing Calendar
From the Open-Publishing Newswire
Indybay Feature
Publish to Newswire
Add an Event
Related Categories: California | Central Valley | North Coast | Environment & Forest Defense | Government & Elections
Brown received 'ocean champion' award at gala closed to press
by Dan Bacher
Thursday Apr 5th, 2012 9:56 AM
Governor Jerry Brown presided over record water exports out of the Delta and a record fish kill at the state and federal pumps in 2011. A record number of 8,989,639 Sacramento splittail were "salvaged" in the Delta pumps in order to ship record amounts of water to southern California and corporate agribusiness. The annual splittail “salvage” number is 1,201,585 fish. 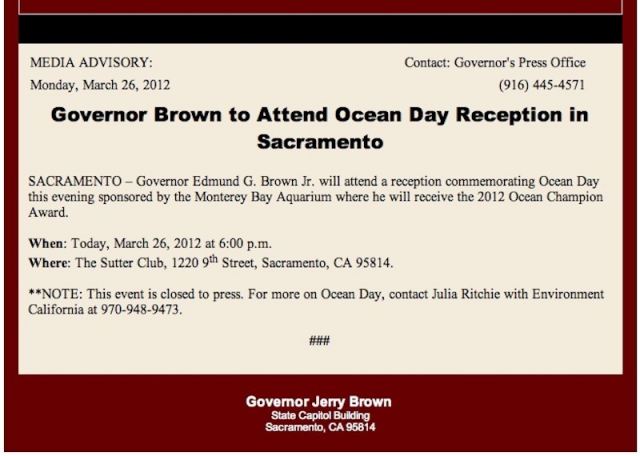 On March 26, I received a news release from the Governor's office stating that "Governor Edmund G. Brown will attend a reception commemorating Ocean Day this evening sponsored by the Monterey Bay Aquarium where he will receive the 2012 Ocean Champion Award."

The event was held that evening at 6 p.m. at the Sutter Club in Sacramento.

However, the release noted, "This event is closed to the press."

I find it interesting that the press was barred from this event. Could this because the media might ask some embarrassing questions about why Governor Jerry Brown was receiving the 2012 'Ocean Champion' award when he has committed himself to continuing many of the abysmal environmental polices of Governor Arnold Schwarzenegger?

David Gurney, independent journalist and Co-Chair of the Ocean Protection Coalition, noted that the Governor and the sponsors of the event employed the first and perhaps easiest way to “manage the news” - simply to deny reporters access to information or an event. (http://noyonews.net/?p=5525)

“Members of the press were left to wonder why reporting was barred from an event which logically, the Governor would want proudly publicized. Since the free press was barred, one can only wonder if Catherine Reheis-Boyd, President of the Western States Petroleum Association, and chair of the MLPA Initiative for the South Coast, was on hand at the ‘Ocean Champion’ awards banquet ?” said Gurney.

Gurney said the sponsors of the event, the Monterey Bay Aquarium, Julie Packard of the Packard Foundation, and other Resources Legacy Fund Foundation billionaires who funded the “Initiative,” were no doubt on hand in full force. “They did not want their quality-time with the Governor impinged upon by the prying eyes of the press,” he noted.

“Our impoverished Governor, Jerry Brown, no doubt welcomed both the free seafood dinner, and the private funding of tens of millions of dollars that financed the outlaw public process, that claims to ‘save the ocean,’” Gurney quipped.

“The financiers of the Marine Life Protection Act ‘Initiative’ were celebrating the success of their experimental plan to both illegally privatize a governmental process, and appropriate about 14% of California’s offshore resources,” Gurney continued.

“It seems the main thing ‘protected’ by this corrupt version of ‘the Act,’ were the special interests who financed it. As such, the MLPA ‘Initiative’ should in reality be called: the marine life protection racket. Apparently, the bitter hypocrisy of super-rich ‘ocean guardians’ – eating a haute monde ‘sustainable seafood’ dinner in secrecy, to celebrate the faux conquistador of sustainable fishing communities – was totally lost on these corporate plutocrats,” Gurney concluded.

I agree with Gurney about his criticism of the effort by the Governor's office and event sponsors to exclude the press from this event. This would have been a great chance for reporters to ask Brown about his policies on the oceans, Delta and other environmental issues.

In addition, I find it puzzling that Brown was bestowed the “Ocean Champion” award by NGOs when his administration has continued Schwarzenegger administration policies that threaten ocean, Delta and Central Valley fisheries.

I realize that Brown signed a couple of good bills for ocean fisheries, including a bill limiting the number of crab pots used by commercial fishermen and legislation banning the sale of shark fins in California. However, on the biggest and most controversial issues regarding our oceans, estuaries and freshwater resources, Brown has been firmly on the side of corporate interests that seek to privatize and exploit public trust resources.

First, the Governor presided over record water exports out of the Delta, the largest estuary on the West Coast of the Americas, and a record fish kill at the state and federal pumps in 2011. A record number of 8,989,639 native Sacramento splittail were "salvaged" in the Delta pumps in order to ship record amounts of water to southern California and corporate agribusiness. The annual splittail “salvage” number is 1,201,585 fish, according to the Bay Institute’s report, Collateral Damage, http://bay.org/publications/collateral-damage

The report emphasized that “Salvage numbers drastically underestimate the actual impact. Although the exact numbers are uncertain, it is clear that tens of millions of fish are killed each year, and only a small fraction of this is reflected in the salvage numbers that are reported.” One study of “pre-screen loss” estimated that as many as 19 of every 20 fish perished before being counted (Castillo, 2010).

Third, Brown has forged ahead with the privately funded Marine Life Protection Act Initiative to create so-called “marine protected areas” in California. These “marine protected areas” fail to protect the ocean from oil drilling and spills, military testing, pollution, corporate aquaculture, wind and wave energy projects and all human impacts on the ocean other than fishing and gathering.

The so-called "marine protected areas" that went into effect on the Southern California coast on January 1 were created under the helm of a big oil lobbyist. Catherine Reheis-Boyd, the President of the Western States Petroleum Association and a relentless advocate for new offshore drilling, the Keystone XL Pipeline and the weakening of California's environmental laws, served as the Chair of the MLPA Blue Ribbon Task Force for the South Coast that oversaw the implementation of these alleged "Yosemites of the Sea."
Add Your Comments
Support Independent Media
We are 100% volunteer and depend on your participation to sustain our efforts!