Add an Event
Newswire
Calendar
Features
Home
Donate
From the Open-Publishing Calendar
From the Open-Publishing Newswire
Indybay Feature
Publish to Newswire
Add an Event
Related Categories: East Bay | Global Justice & Anti-Capitalism | Police State & Prisons
Occupy Oakland Confronts Discriminatory Prosecutions by OPD and DA, 4/3/12: video & photos
by Dave Id
Wednesday Apr 4th, 2012 9:42 AM
On the steps of the Alameda County Courthouse on April 3rd, Occupy Oakland, Occupy Cal, supporters, and attorneys gathered for a press conference to confront the latest political persecutions by the Oakland police department, UCPD, and Alameda County District Attorney Nancy O'Malley. In Oakland, the "Ice Cream Three" face charges with hate crime enhancements for a February confrontation with a woman who admitted during a recent preliminary hearing to calling the defendants the racially hateful N-word as well as physically pushing one of them and grabbing a political button from the clothing of one of the defendants. At UC Berkeley, non-violent Occupy Cal protesters were struck by UCPD officers with batons at a demonstration in November only to be later charged with a string of criminal offenses. In Oakland and Berkeley, protesters have been issued stay-away orders at the behest of D.A. O'Malley. The ACLU has called such stay-away orders unconstitutional. At the press conference, speakers denounced the selective prosecutions, the trumped-up charges, the exorbitant bails, the stay-away orders, and the abuse of hate crimes laws now being directed against the occupy movement in the East Bay. 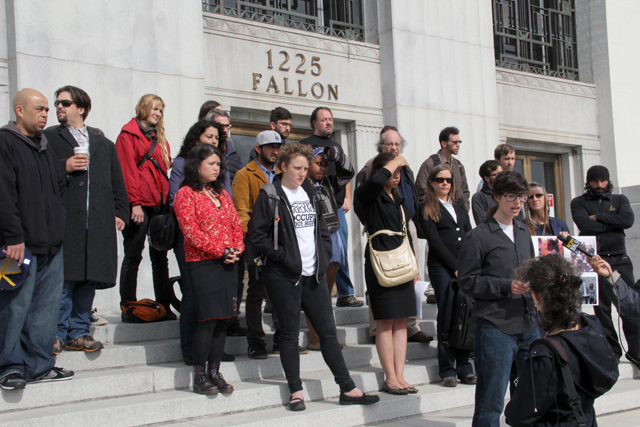 One of the Ice Cream Three remains in jail over a month after his arrest due to his $100,000 bail.

Occupy Oakland activists, UC Berkeley students and civil liberties lawyers gathered today to reject a campaign of repression against protesters in Oakland and Berkeley, including unconstitutional stay-away orders from public spaces and selective prosecutions for trumped up charges such as robbery and “hate crimes.”

Perhaps most egregiously, the Alameda County DA, in an obvious corruption of the spirit of the law, pursued a “hate crimes” prosecution of the “Ice Cream 3”–a group of activists who gathered at an ice cream shop to plan a protest in front of Wells Fargo on Piedmont Avenue. The three activists are accused of using an anti-gay slur during an alleged robbery of a pedestrian who criticized their protest. At best, the “hate crimes enhancement” is an offensive abuse of the justice system. The alleged victim even admitted in pretrial hearings to striking one of her “assailants” and using an offensive racial slur during their confrontation.

“It’s disappointing but not surprising that the Ice Cream 3 were held to answer,” said attorney Dan Siegel, former legal advisor to Mayor Jean Quan, of the firm Siegel & Yee, who represented the defendants during a pretrial hearing. “In Alameda, even a ham sandwich would be held to answer and required to go to trial.”

Siegel’s law firm also represents the victims of a vicious assault, who found the DA’s office and OPD indifferent to their plight. The two Oakland residents were viciously assaulted–one of them requiring substantial facial reconstructive surgery–while their assailants repeatedly hurled homophobic slurs. The DA’s refusal to prosecute the assault at all, much less as a hate crime, while enthusiastically pursuing hate crimes prosecution against political activists, reveals a campaign of selective prosecution meant to stifle the free speech and political activism of the Occupy movement. In conjunction with the stay-away orders, these actions are an attempt to “tame” the Occupy movement–as DA Nancy O’Malley recently characterized her policies in an op-ed for the San Francisco Chronicle.

Dozens of Occupiers have also been given stay-away orders from the park in front of Oakland City Hall, known as Oscar Grant Plaza, requiring them to remain up to 300 yards away from the area. These orders, given to many activists who haven’t been convicted of any crime at all, presume guilt and deny these activists the right to take their grievances to the Oakland City Council, which is at the heart of the stay away zone. Many activists have been given stay-away orders for participating in nonviolent protests that occurred far from the Plaza.

Several UC Berkeley students who were victims of a brutal and well-publicized police assault after setting up an Occupy camp on November 9, 2011 on campus, have also been given stay-away orders from all UC property. These orders bar students from participating in an ambiguously-defined list of activities, including legal protests otherwise protected by the First Amendment. This is especially troubling considering UC Berkeley’s historic association with the Free Speech Movement.

The ACLU has submitted habeas corpus petitions to challenge the stay-away orders issued against Occupy Oakland protesters. “In this country, it’s unacceptable to keep demonstrators out of the public square because the government thinks they might engage in illegal conduct in a future demonstration,” wrote ACLU staff attorney Michael Risher. “Courts have made clear that there is a special value to being able to speak in front of the seat of government authority, be it the White House or City Hall.”

While the District Attorney pulls out all the stops to chill the rights of Oakland and Berkeley activists to free speech, not a single police officer in Alameda County has been disciplined, relieved from active duty, or prosecuted for their role in several high-profile acts of violence and suppression of civil rights. This includes the officers who shot Iraq veteran Scott Olsen in the head and videographer Scott Campbell in the leg with less-than-lethal munitions and the officers who beat Iraq veteran Kayvan Sabeghi.
In New York City, Occupy Wall Street has faced a similar campaign of police repression and has called for a general strike on May 1 as a part of a campaign against it. Occupy Oakland has endorsed this call for a general strike as have many other Occupy groups around the country. Additionally, Occupy 4 Prisoners plans an action on April 24 called “Occupy the Justice Department” in part to protest repression against political activists.

ACLU: “Stay Away Orders Against Protesters Are Unconstitutional”
http://www.aclunc.org/issues/freedom_of_press_and_speech/stay_away_orders_against_protesters_are_unconstitutional.shtml 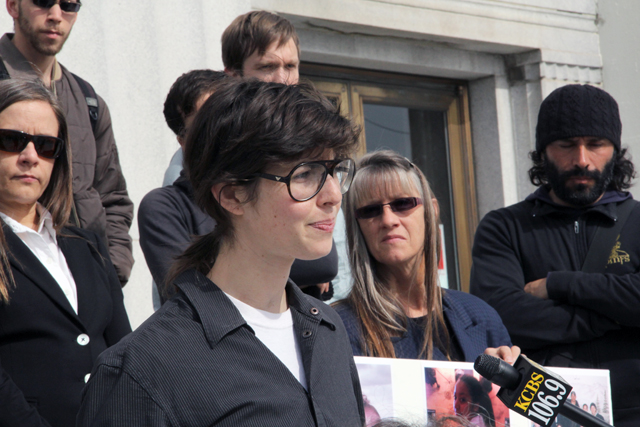 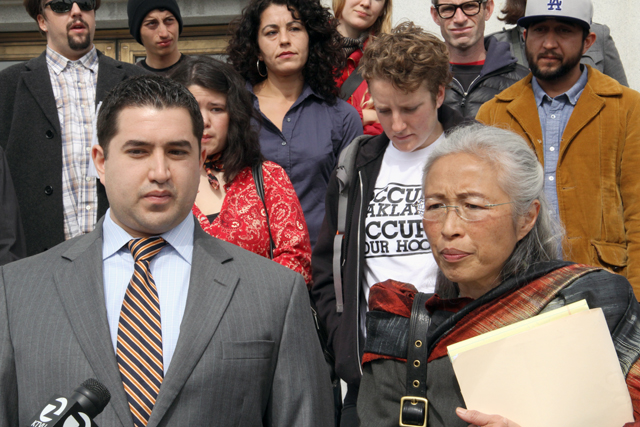 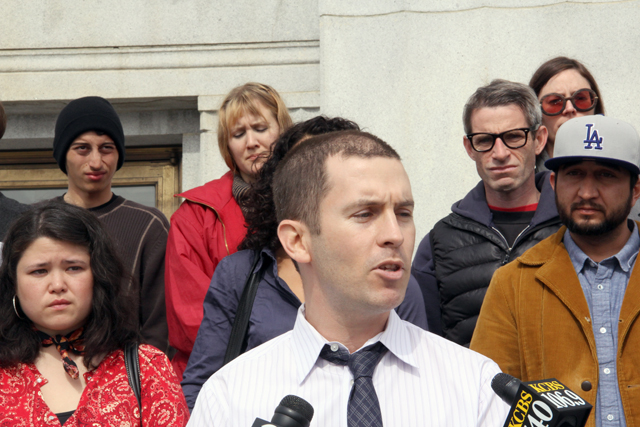 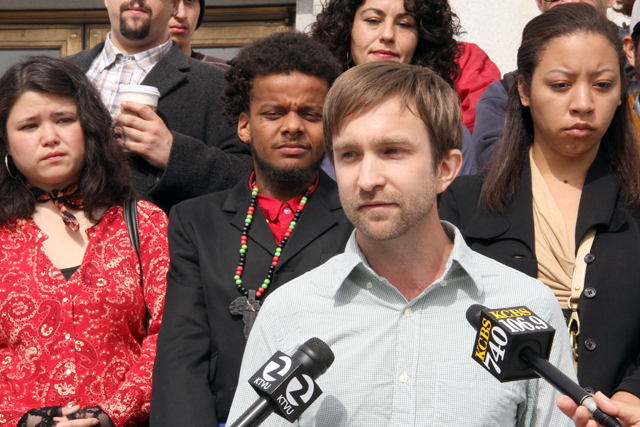 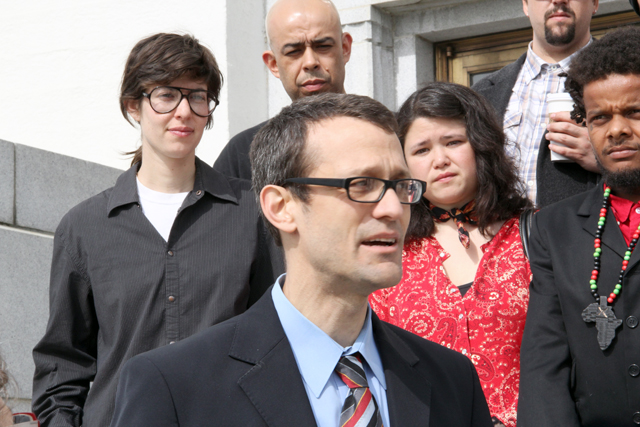 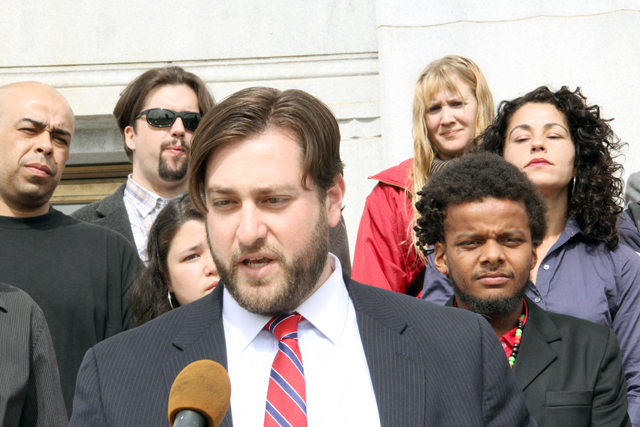 http://indybay.org/occupyoakland
Add Your Comments
Support Independent Media
We are 100% volunteer and depend on your participation to sustain our efforts!