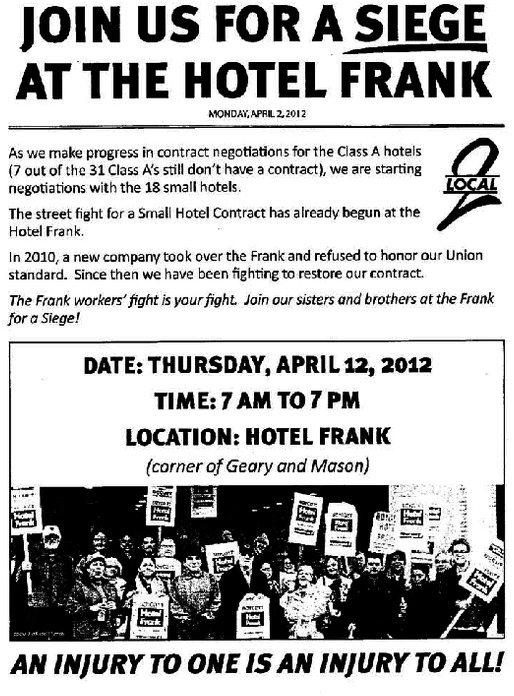 Workers at Hotel Frank have been under attack since Wells Fargo foreclosed on the hotel in May, 2010. Wells Fargo brought in a new management company, Provenance, which refuses to recognize the UNITE HERE Local 2 contract, has dangerously increased the workload for room cleaners and other workers, and did not pay one penny for medical coverage or pensions for almost two years.

The National Labor Relations Board has found Hotel Frank guilty of violating federal labor laws, including firing and disciplining workers for engaging in Union activities. The hotel is now owned by AEW Capital Management, a private equity company based in Boston.

This is a small hotel acting like a big bully.

Added to the calendar on Tue, Apr 3, 2012 5:34PM
§Hotel Frank Siege Update: Hotel has cut off all medical benefits
by Marc Norton (nortonsf [at] ix.netcom.com)

Hotel Frank did not pay one penny in medical benefits (or pensions) after Wells Fargo Bank, AEW Capital Management and Provenance took over in 2010.

Last month we declared that we would go on strike on April 1. In response, the hotel agreed to pay medical benefits starting April 1, and we agreed to postpone the strike.

But when we declared the SIEGE for this Thursday, the hotel retaliated by declaring they would stop future medical payments. Basta Ya!

Come out to the SIEGE on Thursday, bring your friends, bring noisemakers, and bring your outrage! Come early, stay late...

The hotel has responded to our call for the SIEGE by cutting off all new reservations for Thursday, April 12, the day of the SIEGE!

Hotel Frank was auctioned off in a foreclosure sale in May, 2010 by WELLS FARGO.
The bank then sold the hotel to a financial speculator called AEW CAPITAL MANAGEMENT.
The hotel is now managed by a company called PROVENANCE.
(But ask again tomorrow...)

Since the foreclosure sale:

• Management refuses to recognize the Union contract that existed for nearly 40 years.
• The hotel did not pay one penny for medical coverage or pensions for almost two years.
• We all have to work an extra half-hour per day for free.
• Room cleaners clean many more rooms, even if it means skipping breaks and meal periods.
• Staffing has been cut at the front desk and in housekeeping, while the workload has increased.
• A federal judge has found the hotel guilty of firing and disciplining workers for Union activities

For more info on the Hotel Frank fight:
http://www.HotelFrankSF.info
http://www.Facebook.com/BoycottHotelFrank?sk=wall (Like Us!)
http://www.YouTube.com/watch?v=Y9YwGupD5a4&feature=youtu.be
http://www.OneDayLongerSF.org
Add Your Comments
Support Independent Media
We are 100% volunteer and depend on your participation to sustain our efforts!